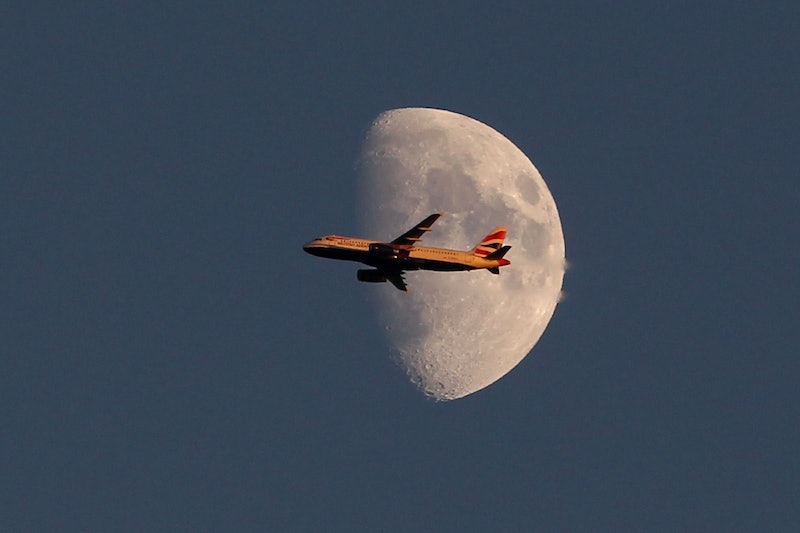 Ahhhh! The first 2019 Mercury retrograde is officially here as of Mar. 5, and settling in until Mar. 28. Of course, this is Mercury retrograde, so I don't mean a relaxing type of "ahhhh" — I mean the kind that sounds like a teen horror movie scream. Anyway, if I had my way, I would arrange to literally not leave my house or speak to anyone for the duration of a Mercury retrograde. Is that normal? Unfortunately, society/capitalism/my desperate need for constant attention won't very well let me do that, so I have to settle for some Mercury retrograde caution instead. But for those of you who are actually traveling during Mercury retrograde, whew. That's a lot, but you'll survive. Let's have a seat and get things together there, shall we?

So, here's the deal: Astrologically speaking, the planet Mercury rules over the travel area of our lives. This can pretty much apply to anything from driving to work in the morning to catching a flight to Singapore. When Mercury enters one of its often-dreaded retrograde periods (which it does several times per year), this area of our life can get a shaken up. Travel snags are much more likely, delays are to be expected, and general plans tend to go a little bit awry.

Mercury also rules over things like technology and communication — both of which can also affect our travel plans during a backspin (think your phone's GPS giving you faulty directions somewhere, or accidentally being unclear with someone about where you're meeting and showing up to the wrong place). In other words, traveling while Mercury retrogrades kind of sucks and presents way too many opportunities for things to go wrong, so it's not generally going to be smooth sailing.

That said, some of you less retrograde-aware folks out there may have already booked a vacation, business trip, or other travel journey that takes place between now and Mar. 28 (when Mercury goes direct again). Or perhaps you are aware of Mercury Rx's effects on travel, but you have to make a trip anyway. Whatever the reasons, it's inevitable: Some of us are going to have to travel during this astrological sh*t show. That said, here are some Mercury retrograde travel survival tips to help you avoid a total Rx-induced breakdown during this period.

Wires are definitely getting crossed during Mercury retrograde, so do not skimp on double, triple, or quadruple checking every last detail of your trip. "[M]ake sure you triple check communications — including flight details and Uber confirmations," explains astrologer Lisa Stardust, who spoke with Bustle about how to handle Mercury Rx travel. "Please make sure you get in the correct Uber before going on a joyride on someone else’s tab." Triple check your bank account, too, just in case someone else makes that same mistake on your tab.

"Make sure you have airline notifications being sent to your phone AND email," advises astrologer Shakira Taulbourn, who also spoke with Bustle about what we should stay aware of while traveling this month. "[K]eep a copy of your confirmation numbers somewhere, make extra copies of your passport & IDS, and allow extra time in your schedule for delays & disruptions." Having multiple copies of your documents will majorly lower your risk of some last-minute, very-Mercury-retrograde disaster. "Know that Mercury retrograde won’t ruin your trip, it’ll just cause annoyances."

OK, sorry to get all new-agey on you (just kidding — if you know me, you know I'm not sorry about that, wink wink), but carrying some protective crystals with you while you travel during Mercury retrograde can offer you a lil' energetic shield and help you keep your cool. Why would anyone say no to that? Here are some perfect crystals for Mercury retrograde March 2019, and here are a few other helpful crystals for traveling in general. Keep these babies with you, and try a simple crystal ritual to ease the anxiety of traveling if needed.

Seriously, loosen up — you're probably going to face a delay in your route at some point, whether it's hitting random bumper-to-bumper traffic, finding out your flight was canceled, or having to re-book a room. "Mercury RX can bring about hiccups in your travel plans," explains astrologer Caitlin McGarry in an interview with Bustle. "Be prepared for delays in trains, canceled flights, hotels not having you their system, and any other roadblocks you could imagine. Give yourself ample travel time and double check your routes/itinerary to steer clear of any Mercury retrograde tricks." Prep yourself with a good book, some fresh podcasts, and fully-charged devices to keep you entertained during your requisite Mercury Rx delays.

"Travel during this Pisces mercury retrograde season is gonna be out there ... trips to the museums may end up making you aware of something you didn’t know," explains Broadly astrologer Danny Larkin, who spoke with Bustle about this transit. Don't expect for everything you plan to go as planned — but think of that as an added element of adventure. "[A]s Socrates once pointed out, not knowing is the root of wisdom," he continues. "Sometimes when you’re not in control and don’t know what the hell is going to happen next, that’s when insight comes and inspiration hits."