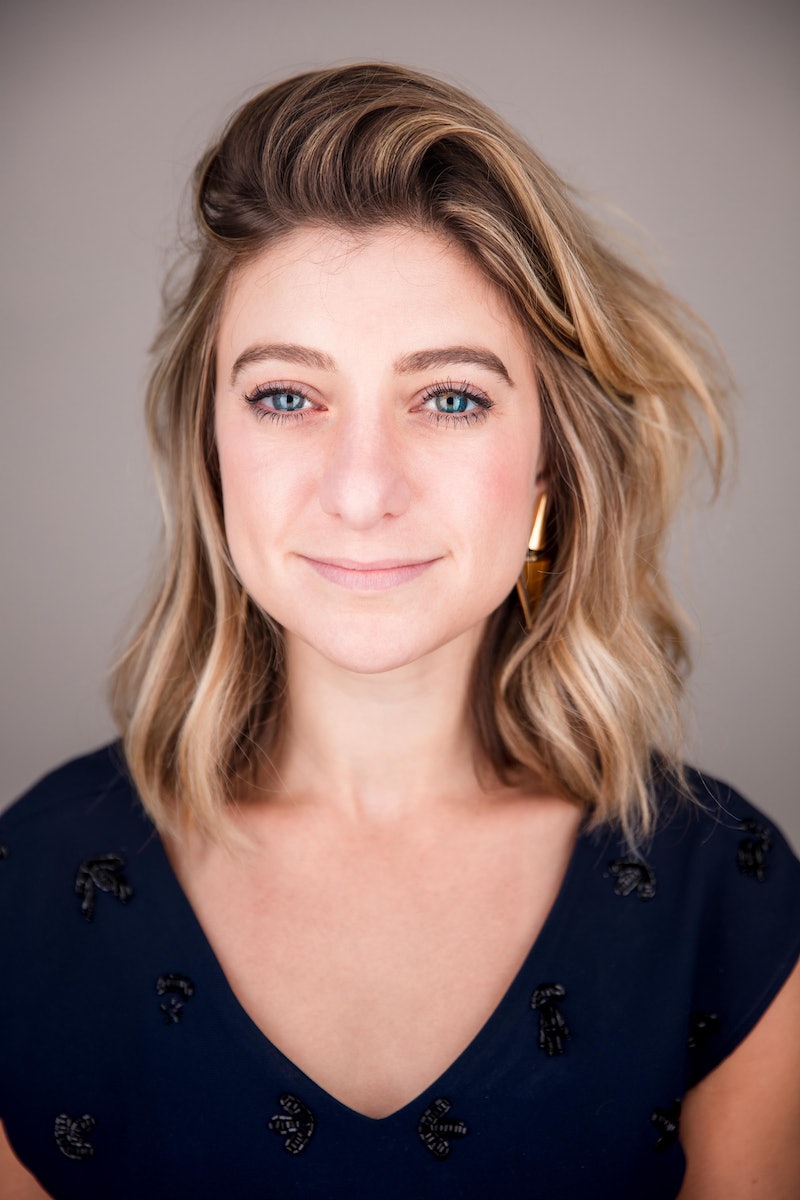 Sex ed. The words conjure up an image of classrooms separated by gender, girls learning about their uteruses, while boys learn about their penises. Maybe there’s a condom and a banana in there too, a little bit later on, right? From those very first sex ed classes, sex is shrouded in mystery, giggles, and shame. As a result, way too many people get to the point where they actually want to have sex, but don’t know how to do it. They also might not know what works for their body or what consent is or that it’s OK to be gay. You know, the important stuff.

According to the Guttmacher Institute, comprehensive sex education just isn’t happening in the majority of American schools. Only 22 states — less than half the country requires both sex and HIV education. Additionally, only 13 states require lessons about sexual orientation (with four requiring that only “negative information” about homosexuality be provided), four states require discussion of gender identity and only one (California) requires a class on consent. Oh, and no state — literally not one — mandates that their sex educators talk about pleasure.

Pretty grim, isn’t it? I won’t even dive into the ways that the Trump administration is attacking teen pregnancy prevention programs and promoting abstinence-only “education” again, because it will just depress you further. Instead, I want to introduce you to five women who are revolutionizing sex ed in America today. They’re making apps, creating YouTube series, designing vibrators that give personalized feedback, and, yeah, even going into schools. As our schools and government continue to miss the mark when it comes to educating America’s young people about sex, these women are stepping up and filling the void.

“It’s not like we have a specific curriculum that people must learn," CEO Liz Klinger tells Bustle. "Everyone is coming in from different backgrounds and with different goals. It’s education in terms of providing people information about themselves that’s literally never been available to people before, but it’s not the traditional form of education.”

Klinger started on the path toward creating Lioness when she was a representative for Passion Parties, which are the naughty older sister of Tupperware parties. Basically, reps arrange get togethers, go into people's homes, and sell sex toys. “One of the things I found from doing that is whether you’re talking to someone who’s 18 or someone who’s 50, everyone have questions about sex," Klinger tells Bustle. "And especially about their own bodies. A lot of the time, people were coming up to me with questions that they'd never confided in anybody. It was shocking to me because these were questions that were legitimately impact their happiness, their relationships — sometimes even their health."

Lioness is not only helping individual women figure out their arousal and orgasmic patterns, but they're also contributing to the general knowledge base of information about women's pleasure. Science traditionally hasn't done a great job studying how and why women get off but Lioness has already released a (non-scientific) study about orgasm patterns. This is information that no one had before now — and it's just the beginning.

Carolyn Witte started Tia, an online women’s health company, after having issues with her reproductive system that no doctor could figure out. Turns out, she has PCOS — a hormonal disorder that affects about 10 percent of women. It’s not that uncommon, but it took doctors a solid three years to figure it out; three years in which she was struggling through the physical and emotional upheavals of knowing that something was wrong, if not what was wrong.

“It escalated to a series of fertility and infertility issues and, through that process, I realized a couple of things that are really broken about health care,” Witte tells Bustle. “First, the fragmentation of different doctors and processes makes it super hard for you to make informed decisions. Second, having all of these different doctors — none of whom you have a particularly close relationship with — makes it hard to feel like you have a voice and relationship with the health care system. And third, taboos around these topics make them really hard to talk about and make you feel really alone.”

Tia started as a place for women to ask general health care questions, but it quickly became clear that questions around sexual and reproductive health issues were forefront in their users’ minds. The format of the Tia app — which provides both machine-generated answers to questions in a chat format and connections with human sexual health educators — allows people to ask questions that they might be too nervous to ask in person. But, Witte says, it’s exactly those questions that need asking. “We’re obsessed with the idea of informed decision making,” Witte says. “Since launching Tia, we’re continually shocked at Tia’s ability to fill this void around basic sex education that’s missing in America today.”

In a world where any type of sex tech company struggles to find funding, Tia just raised a $2.5 million round, with venture capitalist firms Combine, Homebrew, and Compound proudly signing their name to Witte’s vision and product. And their timing couldn’t be better. “At a time when women’s health care and rights are threatened, I think that’s really needed,” Witte says.

Nicole Cushman, M.P.H, is a 15-year veteran of the sexual health space, with big names titles like former Director of Education for Planned Parenthood Federation of America on her resume. She’s the executive director of Answer, a resource that offers comprehensive sex ed trainings for educators, resources for parents and teens, and a magazine and website called Sex, Etc. that’s for and by teenagers.

“Our tagline is ‘sex ed, honestly’ and I think that really speaks to one of our core values, which is to give young people answers and factual information about sexual health,” Cushman tells Bustle. “For so long, access to information has been withheld or young people have been, frankly, lied to. Certainly that’s the case with a lot of abstinence-only programming, so we really stand for complete, factual information.”

Answer is also one of three non-profits — the other two are Advocates for Youth and Youth Tech Health — behind the sex ed video playlist AMAZE, which was created to reach kids between the ages of 10 and 14. “This is an often overlooked population and a really critical age group,” Cushman says. “During those years — late elementary and into middle school — young people are going through a real transitional period from childhood to older adolescence. There’s a lot changing in their bodies physically and also they’re going through a lot of social and emotional changes. AMAZE is trying to fill that gap and do it in a way that’s really engaging and relevant for young people, and that’s through animation and YouTube.”

AMAZE is celebrating its one-year anniversary. In their short time, they’ve posted almost 50 sex ed videos that have gotten more than three million views. They’ve also collected data about those views so that they can refine their approach even more in the years to come, which is an awesome, revolutionary move that the internet makes possible.

Mia Davis is the 25-year-old Stanford grad and co-founder of the sex ed app Tabú. The app uses bright colors, fresh design, and factually accurate information to answer users’ burning sex questions. It also offers a community forum, where people can talk about sex in a safe, nonjudgmental space. The idea for Tabú grew out of conversations Davis had with friends, starting with the misrepresentation of sex in the media. Where were the conversations? The awkwardness? The fumbling?

“Often, when you’re watching TV, you see people immediately having sex without any conversation,” Davis tells Bustle. “You’re never talking about consent and people are never really communicating at all. It’s a poor representation for young people because that’s what they think sex is and should be.”

Davis also came from a conservative family and found that when she had questions about her body or about sex, she didn’t really feel comfortable turning to her mom with them. “There’s a gap for people who are raised in a conservative family,” Davis says. “They’re not taught to talk about these things, but they definitely want to.”

So she created Tabú to answer those questions, talk about those issues, and use the words that even her mom was too nervous to say. She hopes that it helps women — but also people of other genders, as 52 percent of their users identify as male — learn how to advocate for themselves.

“I’m passionate about empowering young people — women especially — to communicate and advocate for themselves,” Davis says. “Whether it’s with a partner or a doctor, it’s so important to be able to speak up for you what your needs are and when you’re uncomfortable with something. That’s something that took a long time for me to learn and I believe firmly that when you have education and you have the tools to talk about something, it’s a lot more empowering to be able to advocate for yourself.”

Olivia Richman is a third year medical student at the American University of Antigua College of Medicine and she’s the founder of the YouTube video series GlamourPussMD. She started her channel after realizing that 10 girl cousins, while educated in good schools, didn’t know the basics of the female reproductive system.

“If my cousins didn’t have me or my mom who’s a doctor to talk to about sex, who are other girls in the country going to?” Richman tells Bustle. “I thought it was necessary for girls to learn about their bodies and how they work. The physiology can be a little complicated, so I thought it’d be better to break it down so girls don’t have to ask around or find a friend.”

Her videos include titles like “External Female Anatomy — What does it look like down there??” and “The Clitoris — That clit is littttt, girl!” Her style is casual, young, and full of pop-ups that both help explain and entertain. Her first round focus a lot on anatomy because she’s trying to really de-stigmatize the biosex female body parts.

“In one of my videos I bring up the fact that the word ‘dick’ is so common,” Richman says. “Or ‘balls,’ even. Our society uses those terms so much more commonly than we do terms for the female anatomy. Why don’t we celebrate the female anatomy?”

But GlamourPussMD isn’t going to always be focused solely on body parts and STIs. Richman says that her big goal is to create a series of videos that also address issues like rape culture, body positivity, and even preventative health issues, like diabetes. Looks like this future MD is ready to take on the world.

So when the next news story comes out about the current administration taking away more of our reproductive rights or slashing funding to comprehensive sex ed, remember these women. Remember that there are people out there fighting, every day, for the right of every American, of every gender and sexuality, to factual information about their bodies and their sex lives. And a little bit of opposition from the White House sure isn't going to stop any of them.

More like this
TikTok's Voluntary Celibacy Trend Has Sparked A Movement
By Lexi Inks
My Partner Wants Me To Wear A Diaper During Sex. Help!
By Sophia Benoit
12 Active Date Ideas That'll Get You & Your Boo Outside
By Lexi Inks
12 Aphrodisiac Desserts To Spice Up Your Valentine’s Day
By Kaitlyn Wylde
Get Even More From Bustle — Sign Up For The Newsletter
From hair trends to relationship advice, our daily newsletter has everything you need to sound like a person who’s on TikTok, even if you aren’t.