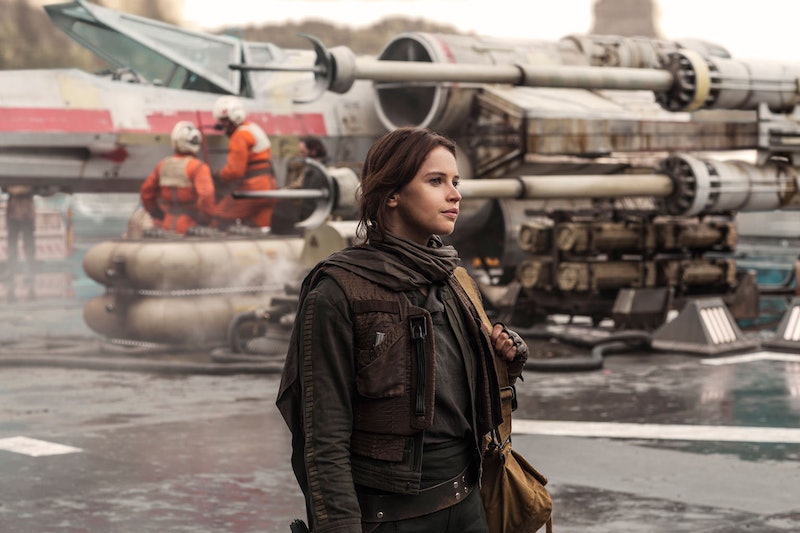 Going into Rogue One, there was one question everybody wanted to know the answer to: is Jyn Erso Rey's mother? Introduced in Star Wars: The Force Awakens, the mystery of Rey's parentage lies at the center of the new trilogy. And so, when a new Star Wars film was announced with a star, Felicity Jones, who looks remarkably like the actress who plays Rey, Daisy Ridley, fans jumped on the idea that Jyn and Rey were, in fact, mother and daughter. Spoilers ahead! Given the ending of Rogue One, it's pretty much impossible for Jyn to be Rey's mother. However, that doesn't mean they still can't be connected, as shown by these clues Jyn and Rey are relatives in the Star Wars Universe.

Fans who have done the math know that it's impossible for Jyn and Rey to be mother and daughter or sisters. Rogue One takes place right before Episode IV, and The Force Awakens takes place 30 years after Episode VI, which means that by the time Rey is conceived, Jyn and both her parents are dead. So, if you're looking for specific plot points form Rogue One and/or The Force Awakens to support the theory that Jyn and Rey are related, you won't find much in what's there. Most of the clues that Jyn and Rey are related come from the absence of such plot points, as seen below.

The only thing we know about Jyn's family is that her parents, Galen and Lyra, are dead by the end of Rogue One. And, while she doesn't appear to have any siblings, there's really a whole lot about Jyn's extended family we know nothing about. Maybe she has cousins, or older siblings we just don't know about, or perhaps she has a long lost brother or an aunt hiding in the far reaches of the galaxy. As long as Jyn's family members aren't all confirmed to be deceased, the possibility that she is somehow related to Rey is still very much alive and well.

It's been said before (and, no doubt, over-analyzed before), but Jyn and Rey share a striking resemblance to one another. I'm not saying all white, brunette women with British accents are related, but I'm also not willing to rule out Jyn and Rey's familial connection just yet. What can I say, if the powers that be didn't want us speculating on Jyn and Rey's obvious shared looks, maybe they shouldn't have cast two women who could pass as sisters.

3. Jyn's Connection To The Force

Rey has an obvious connection to the Force in The Force Awakens, evidenced by her ability to literally summon Luke Skywalker's lightsaber in mid-battle with Kylo Ren. Jyn's connection to the Force is a bit less obvious, perhaps a bit more spiritual than tangible, but it is still there. Jyn wears her Kyber crystal around her neck at all times, summoning a kind of strength from it — be it of the sentimental kind or not.

In Rogue One, Jyn inherits her belief in the Force from her mother, a character we know little to nothing about. Jyn and Rey could be related through Lyra Erso, with shared cousins, aunts, uncles, or grandparents, which would help explain their deep connections to the Force.

This is for those of you still holding out hope for the whole Jyn is Rey's mom theory. As previously stated, Jyn being Rey's mom is, in a word, impossible. If Jyn had given birth to Rey before the events of Rogue One, that would make Rey over 30 years old in The Force Awakens, which she is clearly not. The only other alternative theory to make Jyn and Rey's relationship in any way maternal would be if Jyn gave birth to a son or a daughter as a teenager, and said son or daughter grew up to become one of Rey's parents. In Rogue One, it's established that Jyn has been on her own since she was 15, so there are six or so years of Jyn's life that are completely unaccounted for. And that's plenty of time to have a secret child.

The events of Rogue One should, if nothing else, put to rest the rumors that Jyn and Luke Skywalker were Rey's biological parents. However, that doesn't mean that Luke Skywalker won't connect the two women in some way or another. Let's face it: Luke Skywalker and his family are at the heart of every single Star Wars film. If Rey and Jyn are connected through another established Star Wars character, it's gotta be Luke.

Let's take a step back from Rogue One and look ahead to Episode VIII and Episode IX. Assuming Rey continues on her journey to lead a new generation of Jedi, or, at the very least, her journey to learn more about the Force and her connection to it, there is going to be a moment when she falters. The laws of Hollywood story structure dictate that Rey will lose faith in herself at a crucial moment, and she'll need something to pick her back up. What could give Rey more of a boost than finding out she's somehow related to the woman who stole the plans to the Death Star?

Jyn and Rey are both badass female characters in the Star Wars Universe. And, while I'd like to think that not all awesome female characters in the same franchise have to share a bloodline, even I can't deny that Rey and Jyn share a few familial traits. We'll have to wait at least another year before we find out anything more on Rey's family, so, until then, let's hope fans cook up more theories tying these two ladies together.