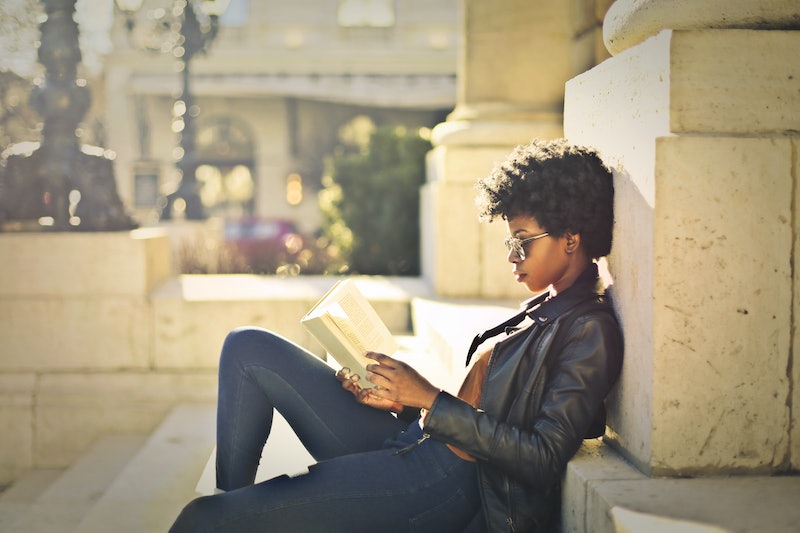 It's easy to tell single women that they're better off because they can spread out in bed and enjoy a life unencumbered by a partner's snoring or snack-stealing or mess-making. But when it comes to being single on a national holiday devoted to celebrating romantic relationships, the ability to keep the covers all to yourself is likely not of importance. And telling single people to "look on the bright side" insinuates they're on the dark side to begin with.

A more empathetic approach to connecting with a single friend is to ask them how they feel about their current status and just listen to their response. Don't try to sweep up their feelings with a solution to make it easier for you to feel good about.

Lots of healthy happy people are single, and alternatively, a lot of single people would very much like to find a partner. There's no shame on either end of the spectrum, so if you're a single person who is looking for some reading material that doesn't suggest taking yourself out to dinner on Valentine's Day to prove you feel empowered, check out these honest essays that break down how complex and dynamic being single really is.

1. "Why Amy Schumer's Trainwreck Is A Revelation And A Relief For Single Women"

In this ELLE essay, Glynnis Macnicol applauds the movie Trainwreck for portraying a single woman as someone who doesn't need pity. She has other things in her life that are important to her, and doesn't ask the audience for concern. This behavior is exemplary, Macnicol points out, because it's sometimes hard for non-single folks to look at single people as another other than waiting to be taken.

"Instead, what Schumer gives us is a character who appears to be neither looking for love nor (thankfully) waiting for it to find her," Macnicol wrote. "Which is true of many, many women I know who are equally as involved in their careers and friends as they are in the notion of romance."

2. “I’m Very Happy Being Single. I Call It Being Self-Partnered”

When Emma Watson called herself self-partnered instead of single in a British Vogue feature the world buzzed about it for months, focusing on the novelty of the phrase, the new age nature of the concept. But if you look at it for what it really is, and how she meant it in terms of the context provided, it's a game changer. Being single is often viewed as a transition state, one that people are waiting to leave, desperately. But the term self-partnered is not a transition state, it's a destination.

“I never believed the whole ‘I’m happy single’ spiel,” Watson said. "I was like, ‘This is totally spiel.’ It took me a long time, but I’m very happy [being single]. I call it being self-partnered.”

3. "The hardest part about being single on Valentine’s Day? Pretending you’re happy about it."

"The self-actualized single woman is up against centuries of insane, lonely, stigmatized single women in movies, such as Fatal Attraction and Single White Female, and literature, such as Charles Dickens’s Great Expectations and William Faulkner’s A Rose For Emily," Shire wrote. "The urge to push back against this stereotype often gives women little room to say that sometimes being single is wonderful, freeing, character-building and sexy — and that sometimes it’s lonely, depressing and simply sucks."

We've all been there, freshly single and scared. Desperate to try out new relationships and find a sense of forever to feel safe. The reality is that newly single life can be scary and can force you to confront what you want, and who you are. This essay is deeply honest and relatable.

"This constantly dangling affection just out of reach is more than I can handle," one diary entry read. "I consider whether this is a viable relationship, and then wonder if it’s too soon or too stupid to consider that. I just want someone who feels like coming home."

5. "All by myself: the joys of being single"

"'I don’t think,' said the shrink one day, 'that you actually want to meet someone.' I was shocked" Patterson wrote. "I was really shocked. What do you mean, I don’t want to meet someone? What about all the dating? The bloody awful dating? What about all that sheer, exhausting, humiliating effort? But the more I thought about it, the more I realized he was probably right. The fact is that I often ran away because I was bored. When I’m on my own, I’m never, ever bored."

This essay for The Cut uses the data Haley Nahman pulled from polling her single followers to confront a lot of heady conceptual ideas about being single. She looks at the concept of relationship neutrality, suggesting that being single shouldn't necessarily be considered a starting place, or a place of deficit.

"The insistence to either revel in singlehood because it ends, or put an end to it because it’s not ideal, is predicated on the idea that romantic love is inevitable, a prerequisite for happiness or an endpoint for loneliness, none of which are categorically true," Nahman wrote. "The divorce rate and number of people struggling with monogamy are proof enough."

If you're looking for a long read, grab a copy of Tiny Beautiful Things: Advice on Love and Life from Dear Sugar by Cheryl Strayed, No One Tells You This: A Memoir by Glynnis MacNicol, and The Unspeakable: And Other Subjects of Discussion by Meaghan Daum.