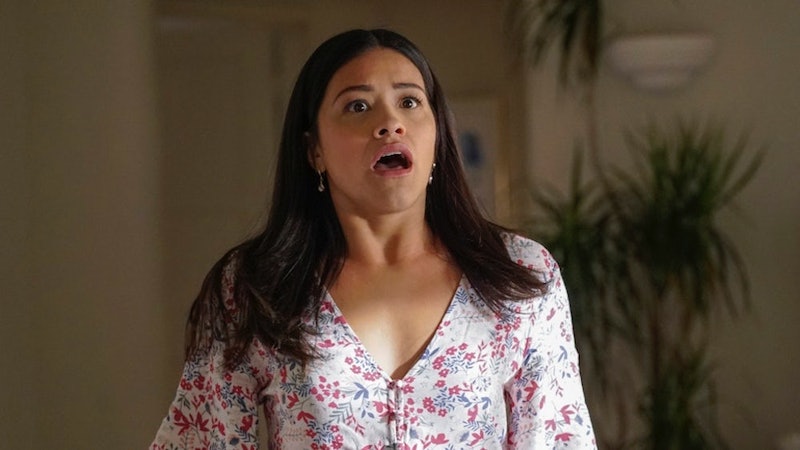 Spoilers for Jane The Virgin ahead. With each passing week, fans get closer and closer to entering a world where Jane the Virgin will be gone for good. When faced with such a depressing dilemma, it's hard not to look back on all the good times and remind ourselves how this show worked its way into our collective hearts. However, it also makes you realize all of the questions Jane the Virgin still needs to answer before those series finale credits start to roll. Because while it may seem like many of the storylines are getting wrapped up, there are still a few lingering plot holes that are in need of some attention.

Granted, there are still a few episodes left to go, so it's important to not worry about these details too extensively just yet. Odds are the writers are waiting until the very last minute to drop some of this knowledge on fans. Then again, Jane the Virgin does love a good cliffhanger and has never failed to keep us guessing about what will happen next. (Who could forget that major Season 4 revelation that Michael was still alive?!) So theorizing how this all could end may be a lost cause.

Regardless, there are some things that simply cannot go unacknowledged, so if you've found yourself too preoccupied with sadness over the show's departure, here's a reminder of some of the things you should be on the lookout for over the next few weeks...

It's a mystery that has existed on the show since the very beginning — and one that fans better get a definitive answer to by the end of all this. Is it Matteo all grown up? Is it Alba's deceased husband? Is it a different child Raf and Jane have at some point in the future?

It's time to show us the identity of the person behind that voice once and for all!

2. What Exactly Is Rose's Endgame?

One would think Rose's main goal is money, considering she had Luisa steal her father's fingerprint from Rafael's safe, which will open a vault full of money. But then why are Rose's minions all dressed up to look exactly like her? What's really going on with this plan and how will it tie into the rest of the characters?

Jane's manuscript is completed and now she officially has a book agent who has agreed to represent her finished project. But what is this second book about? A lot of the key elements Jane has used to describe the novel sounds an awful lot like the plot of the series, so one can't help but wonder.

4. What Happens To Rogelio's Pilot?

Does the This Is Mars pilot end up getting picked up? Will it receive a full season order? Rogelio has worked so hard and viewers are now invested in the outcome of his passion project, so knowing the outcome to this storyline is crucial.

If he wasn't able to end up with Jane, then at least allow fans to know that he finds happiness elsewhere. He deserves that much!

Raf told Jane earlier in the season that he didn't want to have anymore kids and even though she was disappointed, she understood but still wanted to hold out hope that he would have a change of heart down the line. Does that end up happening? The narrator indicated that one of them does change their mind on the subject, so is it Raf? Do they have another kid? If so, then when?

Needless to say, there are still a lot of loose ends to tie up before this series takes its final bow. Let's just hope there's enough time to get to everything. It won't make saying goodbye to the show any less difficult to endure, but it'll certainly help.

More like this
Netflix Shut Down 'Bridgerton' S3 Rumours About A “Very Dark” Storyline
By Bustle
This 'Gossip Girl' Wardrobe Error Has Gone Viral On TikTok
By Alyssa Lapid
'The Last Of Us' Has Officially Been Renewed For Season 2
By Darshita Goyal
Ozzie’s Coming Out Scene With Kitty On 'That ’90s Show' Has Twitter Sobbing
By Brad Witter
Get Even More From Bustle — Sign Up For The Newsletter
From hair trends to relationship advice, our daily newsletter has everything you need to sound like a person who’s on TikTok, even if you aren’t.