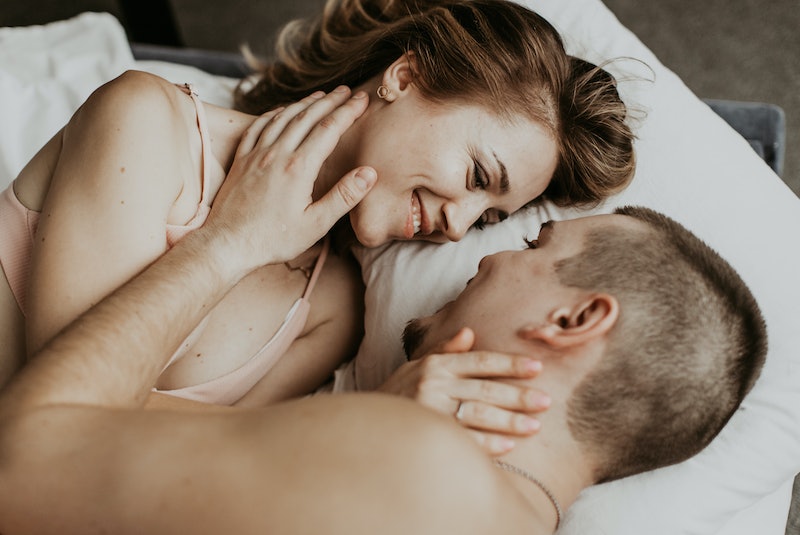 Whether you’re watching a super raunchy part of 50 Shades of Grey or crying your way through The Notebook, Hollywood sex scenes are reliably memorable. However, when you’re actually getting down and dirty in real life, sex can be anything but screen-worthy. It’s a bit awkward, and fumbly and that’s what makes it so much fun. You’re supposed to lose yourself in the moment without having to worry what your face is doing or what your body looks like. So maybe it’s time we saw that reflected in films and on TV. A recent study found 66 percent of Brits think onscreen sex is unrealistic.

Online doctor site, Zava surveyed 2,000 people and analysed 50 films in to try and establish the differences between onscreen sex and what happens IRL. Overall, respondents took issue with the way that orgasms, foreplay, and safe sex were being represented on our screens. Only four percent of those surveyed said they thought sex in films is realistic. One area that respondents pointed out as being particularly different was orgasms. Onscreen 39 percent of women reached climax. This compares to only 19 percent of women in reality and 24 percent of women said they'd never had an orgasm during sex at all.

A favourite in Hollywood sex scenes is having couples climax at the same time. In 30 percent of the films analysed by Zava this was portrayed. While 19 percent of women said they orgasmed during sex this rose massively to 77 percent of men who said they climaxed most or every time they have intercourse. According to Dr Kathryn Basford, a GP at Zava, this focus on climaxing as marking the end of sex reinforces the idea that in order for sex to be good you have to climax. Instead of just enjoying the passionate moment it makes intercourse goal orientated and adds pressure.

She explains, “there’s a pressure for us to perform in the bedroom and always enjoy sex. But, the reality is this isn’t always the case. There's no doubt that this pressure amounts because of what we're seeing on the screen which is potentially damaging for individuals, particularly the younger generation who appear to be experiencing orgasms the least.”

It wasn’t just climaxing that people took issue with. While you might be accustomed to seeing couples ripping each others' clothes off and getting straight to it on screen, 69 percent of respondents said they engage in foreplay before sex. However, this was only shown in 27 percent of the films analysed.

Foreplay wasn’t the only thing being left off screen. Shockingly, only two percent of sex scenes that were analysed showed or implied safe sex with the use of a condom. Meanwhile 20 percent of Brits said they always use a condom and 32 percent said they rely on another form of contraception such as the pill during IRL sex. While it might not seem like a big deal if you see your favourite characters practising safe sex, as Dr Basford argues, the more it’s represented the more normal it is.

She comments, “failing to use contraceptive methods could lead to unwanted pregnancies and the possibility of contracting sexually transmitted infections such as chlamydia, and movies are promoting this through failing to show people using condoms. This is worrying as it’s never been easier to practice safe sex.”

With a massive 66 percent of people thinking sex onscreen is unrealistic, it begs the question what kind of pressure does that put you under when it comes to getting intimate with your parter? Seeing different bodies, abilities, ages, and sexualities practising safe, consensual sex onscreen normalises it. Like so much in Hollywood, it's good to remember that what you see onscreen doesn't always reflect reality.

More like this
Forestcore Is About To Take Over Your TikTok FYP
By Sam Ramsden
Pret & Costa’s Coffee Is The Strongest On The High Street, According To Which?
By Sam Ramsden
Here’s What TikTok's "Mascara” Trend Is *Really* About
By El Hunt
12 Aphrodisiac Desserts To Spice Up Your Valentine’s Day
By Kaitlyn Wylde
Get The Very Best Of Bustle/UK
Sign up for Bustle UK's twice-weekly newsletter, featuring the latest must-watch TV, moving personal stories, and expert advice on the hottest viral buys.