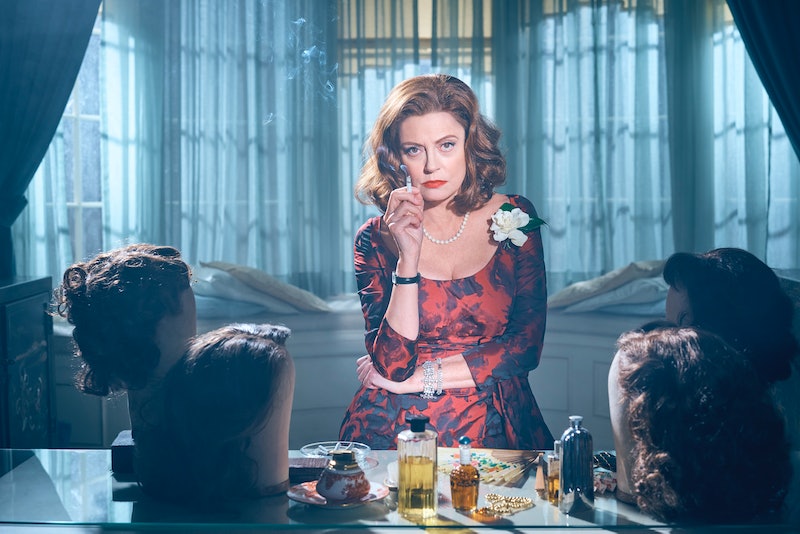 These days, actors have managers and publicists to help them project a certain cultivated image to the general public. But back in the Golden Age of Hollywood, some movie stars said pretty much whatever they wanted — which is how we got these delicious Bette Davis quotes about Joan Crawford. The infamous rivalry between these two iconic actresses is the current subject of Feud Season 1, the first iteration of Ryan Murphy's new FX anthology series, and their decades-long tiff yielded no shortage of scathing bon mots.

Despite the fact that they wouldn't appear onscreen in a movie together until the 1962 camp classic What Ever Happened To Baby Jane?, Davis and Crawford allegedly hated each other ever since the former fell in love with co-star Franchot Tone on the set of 1935's Dangerous… only for Tone to marry a recently divorced Crawford soon after. They wouldn't agree to collaborate until they both found their careers waning as Hollywood entered the 1960s; but that didn't stop them from spending much of their adult lives trading jabs and barbs at each other in the press.

Here are seven of the shadiest Bette Davis quotes about Joan Crawford. In the words of Davis' immortal All About Eve character, aging actress Margo Channing… fasten your seat belts, it's going to be a bumpy night.

1. "Why am I so good at playing bitches? I think it's because I'm not a bitch. Maybe that's why Miss Crawford always plays ladies."

RuPaul and her queens may have perfected reading, but Bette Davis invented it. Davis felt so good about this expertly executed drag that she put it on paper, publishing it in her 1987 memoir This 'n That.

2. "She has slept with every male star at MGM except Lassie."

Davis allegedly said this to Baby Jane director Robert Aldrich when he tried to cast her and Crawford together again in 1964's Hush… Hush, Sweet Charlotte.

4. "Joan always cries a lot. Her tear ducts must be very close to her bladder."

Davis may not have known her basic human anatomy, but she sure knew how to throw some major shade. (Thanks again to The Divine Feud for preserving this one for posterity.)

5. "We were two different types entirely. I can't think of a single part I played that Joan could do. Not one. Can you?"

6. "The best time I ever had with Joan Crawford was when I pushed her down the stairs in What Ever Happened to Baby Jane?"

Something tells me that Feud viewers will get to watch the subject of this alleged Bette Davis quote unfold sooner rather than later.

7. "You should never say bad things about the dead, you should only say good… Joan Crawford is dead. Good!"

Perhaps the most classic takedown of all time. When Crawford succumbed to a heart attack in 1977 at the age of 73, Davis reportedly didn't mince words about her fallen rival. She would go on outlive Crawford by 12 years… although the nomination Davis received for co-starring with Crawford in Baby Jane would forever remain her final Oscar nod.

Watch the enmity between Bette Davis and Joan Crawford unfold when Feud continues on FX this Sunday at 10:00 p.m. ET.