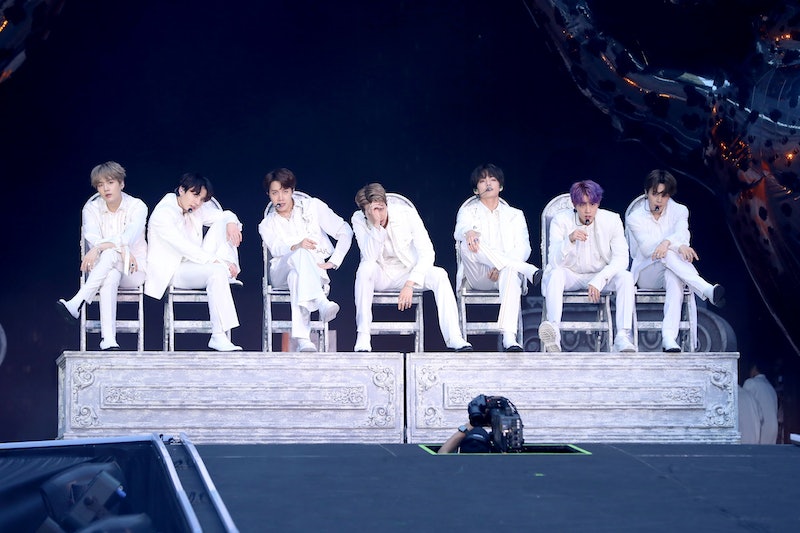 BTS are strong contenders for biggest band in the world. Despite still flying under the radar for more than a handful of music fans across the globe, the seven strong boyband solidified that title on June 1 when they became the first K-Pop group to ever headline London's Wembley Stadium. And boy, did they headline. Between bouncy castles, glittering wild cats, choreography to end all choreography, and an actual moment of flight over the awe-struck crowd of 60,000, BTS made it clear that their reign supreme won't be ending any time soon.

At a press conference before the show, BTS gushed over the honour it was to be playing such a historic venue. "Thanks to all the support from our Army, we were able to perform another edition of the show," Jungkook, the band's youngest member told the audience of assembled press. "This is the performance we've all been waiting for," j-hope explained, with RM addubg "to be able to do anything here is a great honour." Suga took it one step further: "I barely got any sleep last night." You wouldn't think it, though. Sat in a row before the eagerly listening press, the band look more than ready for what's to come in their beyond gorgeous selection of matching Thom Browne suits.

Following in the footsteps of Beyoncé, Coldplay, and One Direction wasn't something the band took lightly. Preparation for the show extended to new staging, a fresh setlist and — of course — stylish as heck new outfits. "We want this to be a festival," Jin noted, explaining how the band and their team examined every song to ensure the show and their performance were the absolute best they could be.

Their venue predecessors were of particular excitement to V, who explained his love of Coldplay at the pre-show press conference. "I have loved Coldplay for years and listened to them forever. Whenever I come to the UK I listen to Coldplay in the car." Cute or what?

Chris Martin wasn't the only Brit that got a mention, though. Following their tribute to the band on The Late Show last month, BTS have been asked about The Beatles on more than one occasion. But don't think that means they're not carving out their own — the Korean Beatles they may be, but this band are doing it on their own terms.

"I guess we can call them our teachers" Suga says, "it's our goal and responsibility to live up to that name. It's a bit of pressure, but we are BTS."

"I think all artists in 2019 have been influenced by The Beatles in one way or another," RM continues. "To be compared once to The Beatles... Every time we hear this we want to try and work harder."

At this point, hard work is practically synonymous with BTS. Between releasing music every year since their formation in 2013 and playing sold out arenas from Osaka to Paris (and pretty much everywhere else, actually), it's a wonder there's even any room for BTS to work harder.

But, that's the thing about BTS – it's not really about them at all. Always quick to take it back to the Army that got them here, the band made sure there was a way to share the night with the multitude of fans unable to score tickets for the event. "We grew up watching the Live Aid video," Suga says, "so coming here to Wembley... This was a moment [we] wanted to share with the rest of the world."

And share it they did. A live stream of both nights at Wembley was shared on South Korean streaming service V Live, and is available for purchase for 1,500 V Live coins (approx. £22).

Oh, and did I mention they did it all again on Sunday, too?