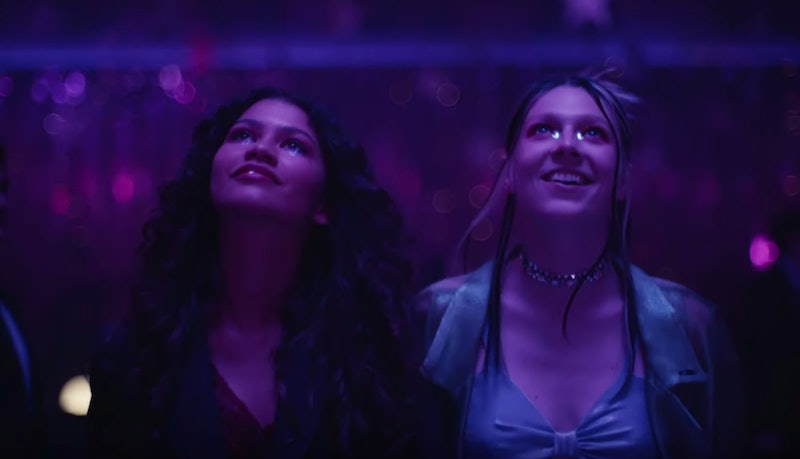 HBO's newest, most-buzzed about show, Euphoria, is about to conclude its first season, and fans can't get enough. The series has caused quite a stir because of its NSFW content and addictive storylines, and has already been renewed for a Season 2. With that in mind, Euphoria finale theories have been taking Twitter and Reddit by storm, and some of them will have fans worried.

The show has dealt with topics ranging from sexual assault, fat- and slut-shaming, nude photos, drugs, and much more, drawing praise for being an accurate depiction of modern day teenage life. Based off an Israeli show of the same name, Euphoria is inspired by real-life incidents from the show's creator and writer, Sam Levinson, which may be why it feels very raw and authentic.

Some critics have argued that it's too risqué, while others have praised it as a realistic portrayal of a budding teen romance between Rue and Jules. But, whether it's too much for you, or you can't get enough, there's no denying that Euphoria has captured fans from all over, and every Sunday night, Twitter is filled with their reactions to the over-the-top things that happened that week.

Going into the Season 1 finale, the show still has plenty of loose ends to tie up and several characters at the end of their tension-filled ropes. And these 7 Euphoria finale theories are just a few possibilities of what could go down in the episode when it airs on Sunday, Aug. 4.

1. Rue Has Actually Been Dead The Whole Time

This is definitely the most popular theory for fans of the show. If you watch, you'll know that each episode spotlights one character's story while also moving the overall plot along. And throughout it all, Zendaya's character Rue acts as the omnipotent narrator, which has caused some fans to suspect she's telling this story from the grave. As reported by Entertainment Weekly, the theory suggests that Rue never actually recovered from the drug overdose alluded to in the beginning of the season, and was dead when her sister, Gia, found her.

More evidence for this theory can also be found on the original Israeli series, as noted on Reddit, where the main character (that Rue is based off of) is also the narrator and is revealed to be dead at the end of the series.

It's not far-fetched at all, but having to say goodbye to Rue in Season 2 would be more than a little heartbreaking, especially after all she's gone through. That said, at the Los Angeles premiere, Levinson said that he wanted Euphoria to give young people hope. "It’s a form of communicating with that younger version of myself,” he said, per The LA Times. “It’s a way of saying, ‘It’s gonna be OK.’” And, what better way to give fans hope than to have Rue survive?

This theory is more of an intense wish amongst fans to see the bully go down than anything else. Nate Jacobs is the obvious villain in the show, harming anyone who gets in the way of what he wants, and being absolutely evil in how he treats people. He's an abuser and has a strong, borderline dangerous infatuation with Jules. Not to mention what he did to Tyler to get Maddy back and himself off the hook.

Nate deserves to face justice. For some fans, that means jail, but the more popular theory for others is death.

How could Nate die you ask? Well, some fans like @always _asleep on Twitter, think Rue will be the one to kill Nate. There was a lot of foreshadowing backing up this theory in the last episode, with Rue asking Fezco's guns. She even mentioned how she would severely hurt Nate for what he's doing to Jules. The whole Detective Bennett thing was a hilarious addition, but it also highlights just how much Rue is onto Nate's plans. Add in the idea that Rue could be narrating the story from jail, and this theory really starts to pick up steam.

4. Nate Gets Off Scot-Free

Euphoria has proven itself to be a pretty honest and true-to-life depiction of what it's like to be a teenager today. So it wouldn't be out of the question for Nate to not only get off scot-free, as noted on Twitter by @ElectSanePeople, but also become successful later in life, like becoming a successful lawyer, judge, or Supreme Court Justice. Nate Jacobs wouldn't be the first privileged white man to be accused of doing something horribly wrong yet come out fine. Sure, it would be infuriating to see him get away with everything, but it wouldn't be unrealistic.

Another theory about who might die in the finale involves Jules. She's already found herself in a few dangerous situations as an underaged girl meeting with grown men for sex. And given the risks that come with meeting strangers from the internet IRL, it's quite possible that the next time she meets someone for a hookup, it might be for the last time. Plus, she's still on Nate's radar and he's already proven he'll hurt anyone, even someone he supposedly loves (see: Maddy).

Fezco is a fan-favorite, and rightfully so. He's loyal to Rue and has shown he has her back on multiple occasions. But that might get him into trouble. After Rue told him everything that's happened with Jules, Fezco took it upon himself to lay down the law with Nate. Nate may not have taken his threat seriously, but Fezco isn't one to joke about killing. He meant it. Plus the promo for the finale shows guns twice, and fans already know that Fezco has firearms, suggesting he's going to use them.

As stated previously, Levinson has said that Euphoria is partly based on things he's gone through, which means it's entirely possible that Rue is telling this story because she's writing it, just like Levinson.

Who knows if any of these theories will actually come to fruition. Euphoria's track record has shown that it's a difficult show to predict. Whatever happens, it's sure to be just as heartbreaking as it is shocking.