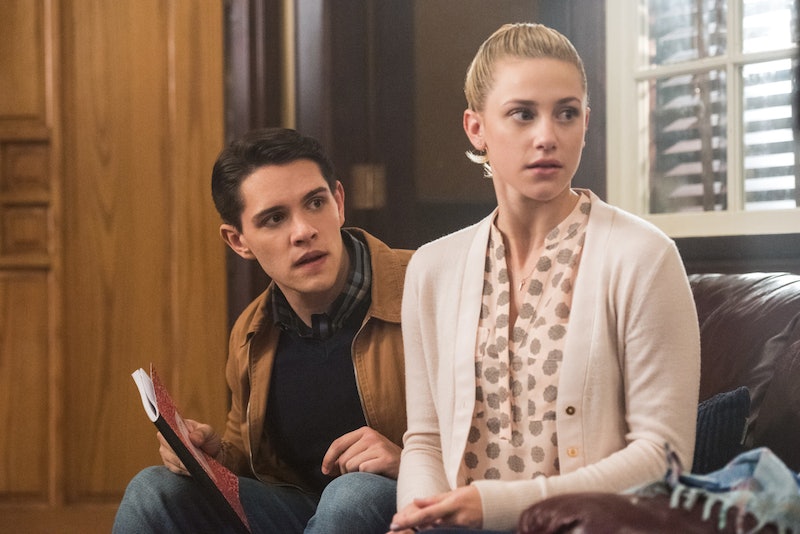 Guess what, Betty Cooper? The internet may have figured out who your mystery brother is. Ever since the Riverdale Season 1 finale dropped the Cooper brother bombshell, fans have been theorizing on who Alice's son could be. Reddit user RandomFranticAction suggests Betty's brother is someone you already know — Kevin's boyfriend, Joaquin DeSantos. That's right, Betty's brother might be a Serpent, and if the theory holds up, they could even have different dads.

The short and sweet fan theory reads, "Joaquin is the baby Hal wanted Alice to abort." Glamour points out Hal's desire for Alice not to go through with her pregnancy may have been because the baby isn't his. Instead, the potential father could be FP Jones. Remember, Season 1 established Betty's mom and Jughead's dad share a history. FP even reminded Alice she couldn't shed her Serpent roots simply by moving to the other side of town.

If FP and Alice do have a son, then that means lovebirds Betty and Jughead share a brother. Go ahead and let that sink in for a moment. If Joaquin really is part of the Cooper-Jones family, then his status as big brother to two of the main characters (who happen to be in a fan-favorite relationship) has the potential to seriously complicate things in Season 2.

Of course, this is just one theory and it hinges on Joaquin being older than both Polly and Betty — something the show hasn't clearly established. He doesn't go to Riverdale High, but that doesn't automatically make him old enough to be the mystery son in question. Although, it's worth noting Rob Raco, who plays Joaquin, seems to be a fan of the idea of Joaquin being FP's son.

Having FP and Alice share a child would be a perfectly Riverdale twist. Not only would it complicate Jughead and Betty's lives, it would also lead to more screen time for Joaquin — and that would definitely be a bonus. Kevin's boyfriend is an intriguing character already. Tying him to two of the show's key families would only make his story richer.

Of course, nothing is ever simple in the town of Riverdale. While this theory makes sense, it's just as likely that Betty's brother will be an entirely new character. If Season 1 taught fans anything, it's to expect the unexpected from the show's tangled web of family feuds and secrets. While Joaquin is an excellent candidate for the secret brother role, he's far from the only option.