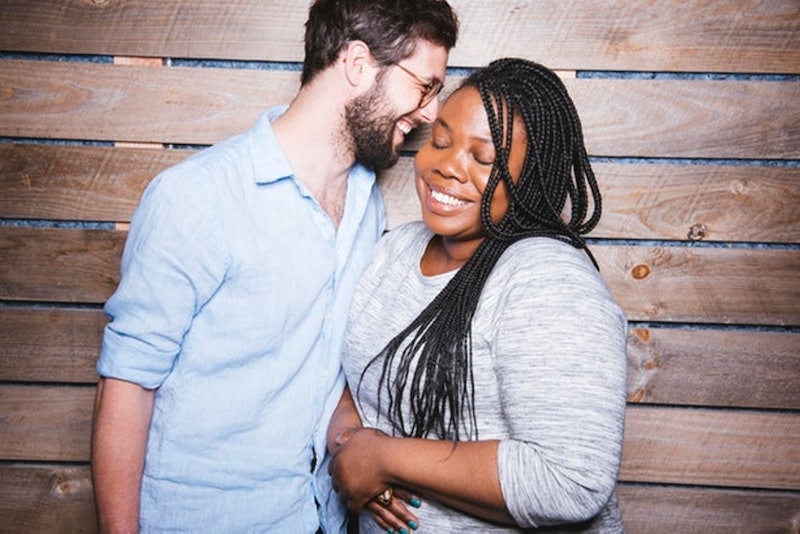 When it comes to charm and manipulation, there is often a fine line. Someone who appears to be charismatic might have ulterior motives for putting on the charm, while there are people out there who just have a way with crowds, but still remain genuine. So how can you distinguish when someone is not acting charming but manipulative? It's not always easy.

"People don't come with warning labels," Megan Hunter, author and co-founder of the High Conflict Institute tells Bustle. If they did, she says, we probably wouldn't listen anyway. We tend to make decisions that go against our self-interests without really realizing it, which becomes especially true in the context of romantic or sexual relationships. Basically, she says, it's easy to become blinded to someone's true nature because we want something from them, like a romantic relationship.

According to Hunter, some of the most challenging manipulative personalities to spot are High-conflict people (HCPs). "They use their charming personalities to draw us in so they can calm their fear-based operating sysem," she says.

For instance, sociopaths can be some of the most charming people in the world. They have a way of getting you to feel more confident in them, than yourself. Narcissistic personalities also "jam your radar with lots and lots of charm at the beginning," Hunter says. "In hindsight, some describe narcissists in the beginning as exceptionally, exceedingly charming — to an intoxicating level." But just as narcissists can turn on the charm, they can also turn it off again. So it's important to watch out for that pattern.

It can be difficult to spot the difference between someone who's being genuinely charming or someone's who's being manipulative. So here are some "charming" habits that are actually manipualtive, according to experts.

More like this
Breeding Kinks Have Been On The Rise Since Roe V. Wade Got Overturned
By Lexi Inks
30 Clever Ways To Slide Into Your Crush's DMs
By Griffin Wynne, Carolyn Steber and Lexi Inks
21 Signs You're Not In Love Anymore
By Sara Altschule, Kathleen Ferraro and Carolyn Steber
10 Ways To Be More Empathetic To Your Partner
By Raven Ishak and Lexi Inks
Get Even More From Bustle — Sign Up For The Newsletter