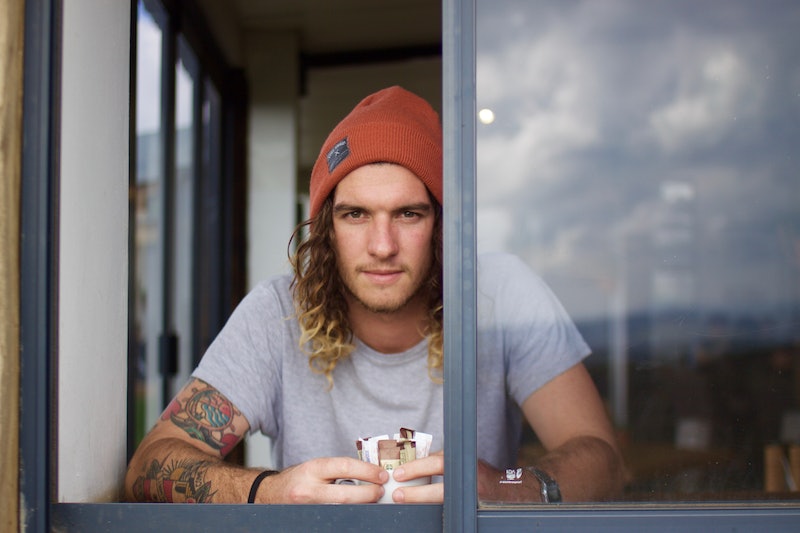 If I’m being honest, I began wondering if my partner was a sociopath 10 months before we broke up. But the idea of armchair diagnosis felt so trendy that I immediately dropped it and adopted smaller excuses to explain his damning behavior. He was finding himself. He was a free spirit. He was depressed. And perhaps my favorite of all — I could fix him. (Shoutout to the whole RomCom complex for that.)

But after parting ways and meeting the other woman he was involved with (polyamory is consensual — this was not) I finally realized how well he slotted into every element Dr. Hare’s checklist, the tool used to diagnose sociopaths. As someone who genuinely wants to believe in the goodness of the people around me, it was terrifying and sad to realize I had been so close to someone who I no longer wanted in my life in any form.

Of course, there’s a larger lesson at play here other than the obvious “don’t date someone with sociopathic tendencies” (which can very difficult to see). If you suspect something is off about the person you’re dating, or your relationship is causing you to act out in ways you wouldn’t normally (who knew I was so good at social media stalking?) ask questions. Lots of them. And if you think you might be dating a sociopath in particular, here are a few traits that helped tip me off.

They Moved In On You Quickly — But Now You're Chasing Them

I still believe that some connections happen quickly — but I’ll be more wary in the future when a guy comes on strong after the first date. In order to make themselves seem like an extraordinary candidate for your affections, sociopaths will move incredibly fast, showering you with texts, gifts, and affections far before what would typically be considered appropriate. This is called “love-bombing,” and results in a flood of dopamine. (Who doesn’t like positive attention?)

"He will choose you, disarm you with his words, and control you with his presence," explains Dr. Robert Hare of the sociopath's magnetic charm. "He will delight you with his wit and his plans. He will show you a good time but you will always get the bill." But when he stops making you the center of his world and you’re jonesing for another hit of feel good chemicals, the tables will turn and suddenly you’ll find yourself pursuing him. (Who among us hasn’t regretted the late night, subtext heavy, “Hi how’s it going?” text?)

They Claim Their Exes Were "Crazy" — But You're "Different"

You know that compliment “You’re not like all the other women?” Yeah — that’s totally not a compliment. Any man who pits women against each other really needs to have his feminist card revoked. My Socio was particularly good at disparaging his ex-girlfriends, all who came in various shades of “crazy.” For a while I even believed he had just made a string of terrible dating decisions. What I would have never believed at the time was I was being conditioned. If I “wasn’t like all the other women” I had to act the role, right? That meant accepting everything at face value and not asking questions.

"It introduces a lack of accountability for his actions," Pam Shaffer, LMFT, tells Bustle. "Given a sociopath's lack of empathy and manipulative nature, it makes this behavior doubly effective."

Sociopaths are great at putting on a public face, when it suits them. When we were with a group of people my Socio curated, he was instantly the center of attention, carrying on conversations with a toastmaster-like zeal. So imagine my surprise when I’d introduce him to my friends (aka people he wasn’t trying to bring under his spell) and he’d simply shut down. It got to the point where he had me convinced I was the only one who could see the real him, the person in between the two extremes.

They Go For The Pity Play

One of the best parts of being in a relationship is knowing that someone has your back. And certainly, you should be able to talk about the bad things as well as the good. But if your partner is constantly bringing up old wounds out of context, they might be going after your pity as a way to distract you from current circumstances. After all, it’s hard to feel suspicious or judge someone you also feel sorry for.

“I am sure that if the devil existed, he would want us to feel very sorry for him,” Martha Stout confirms in The Sociopath Next Door . “If you find yourself often pitying someone who consistently hurts you or other people and who actively campaigns for your sympathy, the chances are close to 100 percent that you are dealing with a sociopath.”

They're Constantly In Motion

As a free spirit with a wonky work schedule, I was thrilled to find someone who was game for just about anything. (Weekend trip? Daytime drinking? Sure, why not.) That was, until I realized he didn’t care who he hurt and what commitments he broke in the name of entertainment. The important thing was to keep moving— with or without me in tow.

It's an action common among sociopaths, due to their inability to form emotional bonds, Stout explains. “And so without our primordial attachments to others, what would we be?" she writes. "Evidently, we would be the players of a game, one that resembled a giant chess match, with our fellow human beings as the rooks, the knights, and the pawns. For this is the essence of sociopathic behavior, and desire."

Their Favorite Shape Is A Triangle

Sociopaths want to be the center of your world. If they’re not, it becomes much harder to exert control. To do that, many will introduce another person into the relationship to upset the balance and make you glom onto them harder. A straight-up affair would be too easy (and risky) to reveal. Usually, these come in the form of an old friend who just has to come along on your dates, an attractive bartender he can’t stop talking to, or even his phone. Anything that when you complain about it, suddenly you’re the insecure/melodramatic/crazy one.

Denying what they're clearly doing is called gaslighting, and it's an incredibly damaging practice. "The Gaslight Effect happens over time, gradually, and often, by the time you are deep into the Gaslight Tango, you are not the same strong self you used to be," writes Robin Stern, Ph.D. "In fact, your ego function has been compromised, and no longer being certain of your reality, you are not often able to accurately identify when something is 'off' with your partner."

They're Always The Victim And/Or The Hero

The sociopath mindset is fascinating. Generally, they believe they are smarter than everyone else, and because of that, life is set up to punish them. Listen to the way your partner talks about themselves. What kind of stories do they regularly tell? And what role do they play? If every story features them one-upping someone (at any cost) or how they were thwarted (by cruel forces clearly out to get them) they may be subtly revealing their worldview.

"The sense of entitlement that comes with sociopathy is astonishing to those who abide by the social laws and conventions of our culture," writes Seth Myers (no, not that one) in his Psychology Today article "Understanding the Sociopath." "It stems from an underlying sense of rage. Sociopaths feel deeply angry and resentful underneath their often-charming exterior, and this rage fuels their sense that they have the right to act out in whichever way they happen to choose at the time. Everything is up for grabs with sociopaths and nothing is off limits."

They Lie About The Weirdest Little Things

Now that everything is said and done, I’m not terribly surprised that even the little truths were up for grabs. But at the time, his lying answers to my questions about everything from the other name on his Netflix account, where various trinkets in his house came from, or even who he went drinking with, filled me with rage — especially because the truth wouldn’t have been automatically damning. But hey, if you’re going to be the master of your own reality, control every aspect. Sociopaths are known pathological liars, and that means even the strangest little lies are a constant. Of course, the big ones happen all the time too.

If Any Issue Outside Their Control Is Brought Up, They Get Defensive

Sociopaths don’t like to be called out on their behavior. It stops the game dead in its tracks — and what do they have if they can’t manipulate, intimidate, and get their own way at any cost? If you confront a suspected sociopath about any bad behavior, expect arguing, debate, and outright denial. Don’t expect them to come clean. And certainly don’t expect closure (which is fine — if you’ve dated a sociopath for any period of time you’re strong enough to give yourself closure.)

Your Gut Is Telling You Something Is Wrong

Maybe this list doesn’t completely resonate with you. Maybe your partner only ticks one or two of the boxes. But if you are so unhappy in your relationship that the idea that they may be a sociopath even occurred to you, consider why. Official diagnosis or not, you deserve someone who won’t manipulate, lie, or discard you the second the wind changes. It’s going to take choosing yourself and making some painful changes. But it’s worth it.