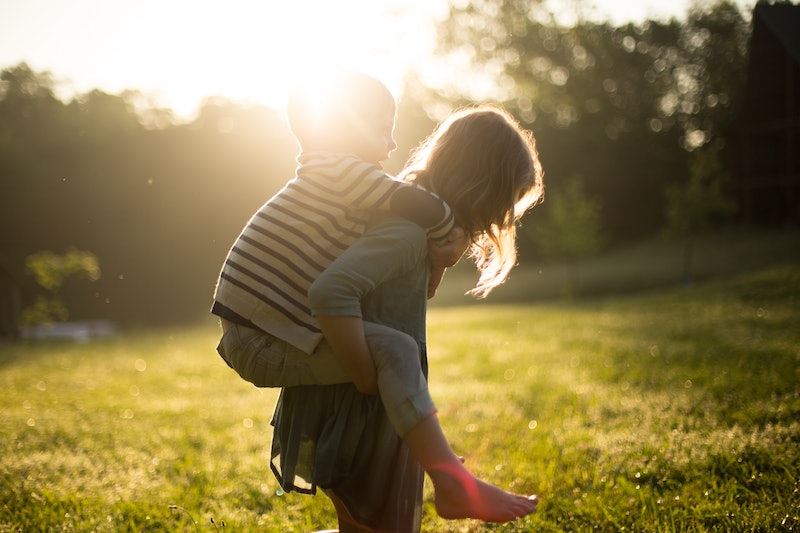 The fact that parents can easily mess up their kids is one of the top running gags in film. Comedies are chock-full of daddy issues jokes, dramas are fraught with portrayals of damaging mother-daughter relationships, and in very few of these movies do toxic parent characters step outside the villain role. That's part of why it's so hard to come to terms with the fact that you may be showing some of the signs you're going to be a toxic mom — and hard to realize that if you can take responsibility and commit to changing, you'll be able to spare yourself and your kids from a lot of heartache.

Parenting is hard. And "parenting is hard" is a huge understatement. Parenting comes with a frankly insane number of challenges, most of which seem built to blindside you. Despite the massive amounts of parenting advice — both wanted and unwanted — available, it's nearly impossible to know what's about to hit you when you become a parent, and how the various stresses and struggles of parenthood will affect your personality.

There are a lot of very needed support groups for kids whose parents didn't or don't deal well with parenthood, like Reddit's raisedbynarcissists forum, where children of narcissistic and often abusive parents support one another. It's easy, reading some of their stories, to recognize the problems with their parents' behavior.

But it can be far more difficult for people to recognize the problems in their own behavior, Nicole Richardson, a licensed professional counselor supervisor and licensed marriage and family therapist, tells Bustle. Knowing the signs of toxic parenthood can help moms and future moms mitigate those possible aspects of their personality — so they don't repeat the cycle.

"I think the single most damaging thing a parent can be is unpredictable," Richardson says. "When children cannot predict the consequences of their own behavior, the world becomes a stressful and even dangerous place to navigate."

It's been proven that kids need structure, so if you struggle to stay consistent in your emotional reactions to your child, they will lose track of how they're supposed to behave. You can help this by establishing a set of clear, constant rules that your child understands and, more importantly, that you stick to. For parents who struggle with mental illnesses, which is estimated to be about one in six, establishing a routine for yourself, monitoring your moods, and practicing good self-care is a vital part of good care for your children.

2. You're A Hardcore Perfectionist

Millennials are especially prone to damaging and self-esteem-eroding forms of perfectionism, so it can be difficult to move through your own perfectionist tendencies and avoid inflicting the same impossible standards on your kids.

Like with rules, you should be consistent in your expectations for your children. It's normal to have difficulties adjusting your expectations as a parent, but if you find yourself angry with your kids for not meeting your standards, you need to take a step back and evaluate if your standards are, first, fair to them, and second, if you've clearly communicated your standards. "[If] a child is praised one day for bringing home a 90 on a test then on another day asked why they did not get 100, they often struggle to understand how to learn what is good/acceptable behavior and what is poor/unacceptable behavior," Richardson says.

3. You Find It Difficult To Be Supportive

There's a cultural difference between what we expect of fathers and what we expect of mothers, Richardson says. And while there's evidence to suggest the way we expect fathers and mothers to behave is damaging to all parents involved, it is legitimate to expect moms to be warm and caring toward their children.

"I think we talk about toxic fathers with different language," Richardson says. "We tend to call fathers abusive, cold, disconnected or absent where we tend to call mothers toxic. Also, because culturally and because of evolutionary psychological factors we expect our mothers to be warm, caring, supportive and accepting of their children, when they aren’t it can be very jarring, even deadly."

If you notice you struggle to be supportive to the people around you, that can indicate you're a toxic mom in the making, simply because being unable to be happy for or warm toward the people close to you is a sign you have some toxic behaviors in general. While it's unrealistic to expect yourself to be able to take every one of your friends' and family members' problems on your shoulders, a complete lack of desire to help them isn't a good sign.

Richardson also says losing your temper and "yelling often or regularly" is a hugely toxic behavior. And she's backed up by Dr. Laura Markham, founder of Aha! Parenting, who told Fatherly that "shouting is something we can do without."

However, Markham also drew the line between occasional, stress and lack of sleep-driven outbursts and constant screaming. While "for those [parents] who sporadically go to 11, the psychological and emotional damage to a kid is minimal," people who lose their tempers on the regular "are setting up more shouting matches in the late-elementary school and teenage years."

Losing your temper as a parent is going to happen. But there's a difference between losing it every once in a while, and constantly unloading your frustrations onto your kids. This is another behavior you'll be able to recognize in how you treat your friends, other family members, and even your pets, and the only way to fix it is to take a step back and figure out why your first instinct is to yell.

5. You Find It Hard To Be Positive

Staying positive as a parent doesn't always mean you have to be a positive person. You may have a dour, jaded, or cynical outlook on the world, but despite that be able to parent optimistically. However, it's easy to fall into patterns of negativity in all kinds of interpersonal relationships. When you're a mom or a potential mom, you should be watching out for a tendency to give constant cricitism, Richardson says.

She points out that criticism is significantly different from "coaching or correcting," both of which are healthy behaviors. For people who are on the receiving end of a toxic person's negative attitude, the signs are clear: "You feel poorly about yourself when you have an encounter with them, you may dread [...] time you plan to spend with them, [and] you may feel as though you have to walk on eggshells because anything could cause them to get upset with you," Richardson explains.

For adults realizing they had toxic parents, seeing how they now tiptoe around certain topics to avoid criticism or mocking is common. Seeing yourself as the toxic mom in that relationship and coming to terms with it now may be a painful feat, but it will help your relationships down the road.

6. You Have A Need For Control

This is one of the broadest categories, but Richardson says a need for control over your own feelings and the feelings of the people around you is a prominent sign of toxicity. Expecting to be able to manage your own potentially negative feelings about yourself is normal, and there are healthy ways to build up your self-esteem.

But when you instead expect other people to bolster your self-esteem by feeling a certain way about you, that can be a seriously dangerous road to go down. You may "[blame your] child for how you feel about yourself, [expect you] child to keep you from feeling lonely, or [expect] that you can control your child's feelings about things," Richardson says, all of which can do damage to your kid.

Kids aren't there to be an emotional support system for their parents. It's the same with friends and family members — if you feel like you lean on them for the upkeep of your self-esteem and get angry with them when they have emotions that aren't in keeping with your expectations, that's toxicity at its height.

7. You Don't Want To Change

"It [can] be really painful to learn that you are a toxic parent," Richardson says. The pain is normal. Learning you are a toxic person who has done damage or who has the possibility to do future damage to the people around you is not easy. If you recognize some of the signs on this list in yourself and want to change, that's a good thing.

The trouble comes if you recognize these signs and think the impact you're having on people is being overexaggerated, or that people are being too sensitive. Intervention is often a necessary part of recovery for kids, so it's essential that if you see the potential effects of your behavior, you recognize that healing is essential, and that giving kids the tools to do so is part of unlearning the toxicity in your personality.

"[Initially], being in therapy alone is the best thing to help the child(ren)," Richardson says. "These types of behaviors are typically learned and passed down from generation to generation so if a parent decides that the pattern ends with them, their child can learn and grow with them."

If this list has been uncomfortable for you or you think it's impossible for you to get better as a person or as a mom, Richardson has words of encouragement for you. "It is important to remember that children are resilient, [...] so if you do the work, things will typically improve," she says.

The emotional labor is a hard part of the learning process, but it all begins with being open to recognizing problematic behaviors in yourself.