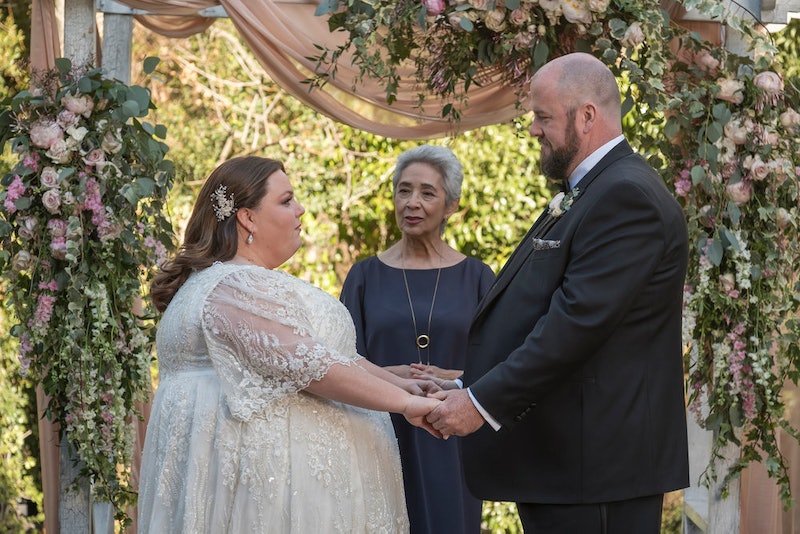 It's no secret that This Is Us has caused fans to cry enough tears to fill an ocean, but if there's another thing the show really excels at, it's surprises. And the biggest bombs dropped during the Season 2 finale, in a series of flash-forwards that hinted at a future for the Pearson clan that wasn't necessarily bright. It was all a pretty big downer on an otherwise beautiful wedding day. Though the show is set to return for Season 3 on Tuesday, Sept. 25 at 9 p.m. ET on NBC, fans are impatient to know what lies in store for their favorite TV family. So what did the flash-forwards mean on This Is Us?

The first hint of a flash-forward actually occurred during the infamous Super Bowl episode, when it was revealed that an adult Tess had become a social worker who placed kids in foster homes, likely inspired by her family's experience taking in Deja. It was an emotional twist that few people saw coming, but also just a really sweet moment.

Unfortunately for This Is Us fans everywhere, the flash-forwards in the Season 2 finale present a much less pleasant future for the extended Pearson family. They show various members of the family in a state of crisis, conflict, or at a crossroads. Sure, the Pearson clan is no stranger to tragedy or adversity, but it was still a little disquieting to see all that hardship during a wedding! But what do those flash forwards reveal? What could they mean for Season 3, and the future of the Pearson family? Here are some ideas.

Apparently love was in the air during Kate and Toby's wedding, because in the only positive flashback we're given, it seems like Kevin and Beth's cousin, Zoe, have gotten together. They met briefly during the wedding at the very end of the season finale, and you could almost see the sparks flying. In the flash-forward, we see Zoe sleeping on Kevin's shoulder during a flight, and he tenderly kisses her forehead. Kevin did not have the easiest storyline in Season 2, ending things with Sophie and spiraling out of control with drugs and alcohol. So it was nice to see him find happiness with someone, even if only for a brief moment in a flash-forward.

...And He's Heading To Vietnam

That flight wasn't just to any vacation spot, it was to Vietnam. And, judging by the picture of Jack that Kevin is holding during the flight, he's there to discover a part of his father that he never fully knew. This scene likely hints at what we already know about Season 3: It will explore Jack's experiences as a soldier in the Vietnam War. "We’re going to be spending a lot of time in Vietnam this year," This Is Us producers told journalists at the Television Critics Association press tour, per Harper's Bazaar.

According to Milo Ventimiglia, who plays the Pearson patriarch, the revelations about Jack's time as a soldier will be shocking. "There is a lot to Jack’s history that shapes who he ultimately becomes," the actor told Entertainment Weekly. And Kevin, along with This Is Us fans, will likely be exploring those untold stories during his trip to where it all unfolded.

Toby's Depression Could Be Caused By Fertility Issues

Toby and Kate vowed to be there for each other in sickness and in health, and it seems that this vow will soon be tested. The second flash-forward showed Toby curled up in bed, seemingly suffering from a depressive episode. This behavior was foreshadowed earlier in the episode, when Toby's mother brought up how he had become so distraught when his first marriage fell apart that she would find him in bed in the middle of a work day. Kate comes in and mentions that Toby's doctor wanted to alter his medication, but Toby doesn't answer.

What could cause Toby, usually the one ready with a joke or a grand gesture, to return to such a dark place? We know his last depressive episode was triggered by tragedy — maybe Kate has suffered another miscarriage?

Chrissy Metz, who plays Kate, has hinted that Toby's depression could have something to do with the couple's attempts to have a child. “Having a baby is something that is life-changing, and two people just want to hope that they can have a baby,” Metz told Entertainment Weekly. “Whose fault is that? Maybe there’s something going on physically with Toby too? Who knows? Those things might not have been talked about or addressed because we keep our secrets and we’re ashamed of them.”

But They Can Get Through Anything, Together

For fans who ship Kate and Toby (and that should be, like, everyone), there is no need to worry about the state of their marriage in Season 3, even if they do go through some hard times. "It’s important to note that in relationships, there’s always somebody that might be a little stronger at one time, and then that dynamic switches,” Metz said in the same EW interview. “He’s helped Kate get through so much of her stuff that she’s really ready to show up for him, and while it might be difficult, it’s going to be necessary because they’re going to contend with some hardships. Yet again. Life on life’s terms.” She also said that Toby and Kate's marriage is "good" in Season 3, even if they do go through rough times. So don't let that flash-forward worry you too much: Kate and Toby are endgame.

Randall and Tess Are Facing Something 'Heartbreaking'

In by far the most mysterious flash-forward, an adult Tess and an aging Randall sit in an office, talking about a woman. "It's time to go see her, Tess," Randall says. "I'm not ready," Tess replies, looking a bit terrified. "Me neither," her dad says, honestly. Who could this mystery "her" be?

Well, Metz didn't drop any hints about the person's identity, but she did reveal that whatever Randall and Tess are talking about, it's certainly not happy. When asked during a different interview with Entertainment Weekly, Metz replied, "It’s something you’d… nobody… it’s not good...it’s actually very heartbreaking." Yikes.

And It Could Be About Beth

Could it be something to do with Beth? After all, it seems unusual that Randall would go talk to his daughter about something important without his partner in crime. Maybe some horrible accident or tragedy has befallen Beth, and her beloved husband and daughter just aren't ready to face it? Please, This Is Us writers, say it ain't so!

Possibly even more likely, something has gone wrong with Deja. The scene right before this flash-forward showed Deja taking a baseball bat to Randall's beloved car, smashing in the windshield in an act of incredible anger. Maybe, despite everything Randall and Beth tried to do for Deja, one of their worst-case-scenarios really did come true, and Randall and Tess just aren't ready to face a Deja who could be really struggling.

But whatever the future has in store for the Pearson clan, there's no doubt that they will be able to overcome and get through it, together. They are no strangers to tragedy, but also no strangers to abiding love, and support, and above all, incredible family. I have a feeling they can get through just about anything. That doesn't mean we won't cry about it, though.

More like this
Glenda Cleveland Died 2 Decades After Trying To Turn In Neighbor Jeffery Dahmer
By Brad Witter
'Grey's Anatomy's New Intern Got Advice From Dr. Bailey Herself
By Grace Wehniainen
'Reservation Dogs' Season 3 May Finally Mend Bear & Willie Jack’s Relationship
By Gretchen Smail
Caleb McLaughlin Details Racism From 'Stranger Things' Fans
By Radhika Menon
Get Even More From Bustle — Sign Up For The Newsletter