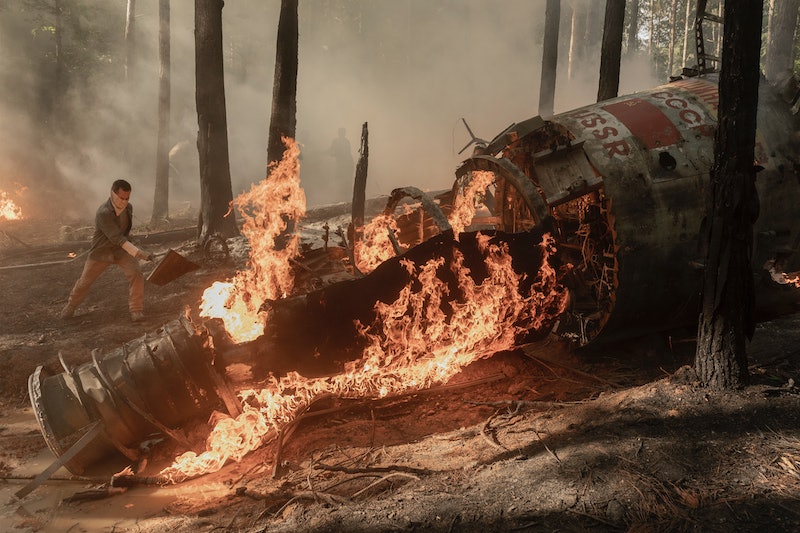 If Eugene has anything to say about it, we haven't heard the last about that satellite on The Walking Dead. In the Season 10 premiere, a Russian satellite fell out of space straight into the Virginia woods surrounding Hilltop, Oceanside, and Alexandria, causing a fire that crossed into Whisperer territory, much to Alpha's chagrin. Everyone knows that Alpha is exacting her revenge on the survivors now because they wandered onto her scorched land, but what fans really want to know more about is that satellite in the Walking Dead universe. Where did it come from and how is it going to affect the story going forward? But fan theories about the satellite on The Walking Dead are wondering what else the crash means, and how it could affect the story going forward.

Only one survivor is concerned about satellite beyond the blaze it caused — Eugene, also known as "Eugenius," who begged Michonne into letting him salvage the wreckage for parts. Later, Eugene brought up the space junk in a recent meeting on TWD and was quickly shut up by a member of the Highwaymen group. That classic form of misdirection is absolutely foreshadowing that the satellite will be important later on.

If nobody takes Eugene seriously, it probably means that he's right about something. Here are some fan theories about how the satellite will factor into The Walking Dead Season 10:

Eugene Will Use It To Communicate With Other Groups

One of the most logical theories is that Eugene will salvage communications materials from the satellite and reach out to other communities around the country/world. In the Walking Dead comics, Eugene discovers the Commonwealth when someone finally answers his radio call. There was already someone on the radio at the end of Season 9, so this could all be leading towards that arc from the comics.

It Will Bring Maggie Back

Piggybacking off of that theory, lots of folks think that the Commonwealth is where the former Hilltop leader went. So if Eugene contacts them, this could be the start of Maggie's return. Lauren Cohan is coming back in Season 11, so it's plausible.

It's Connected To That Russian Guy From Fear The Walking Dead

In the third season of the spin-off series Fear The Walking Dead, Strand somehow manages to talk to someone on his radio who is in space. The Russian cosmonaut tells Strand that the outbreak has covered the world. Showrunner Angela Kang told Insider that the TWD satellite is a coincidence, but that her writers are aware of the Fear storyline, so this could be a subtle indication that the doomed astronaut has finally died up there.

It's Connected To The Saviors

The Saviors used to have a secondary outpost at a satellite relay station. The space junk was Russian, not American, but this old Saviors hangout could be useful in what happens to the satellite (or what's left of it) next. Now that Negan is one of the group (almost), he might offer that as a suggestion to his old pal Eugene.

It's Attracting The Walkers

This is the theory that Eugene tried to bring up in a meeting — that the "waves" of walker attacks were caused by either radiation or a signal coming off of the satellite, not Alpha and the Whisperers. Maybe they can hear or sense something that the living can't, like a dog whistle. If that is the case, it's possible that our heroes could weaponize the satellite against the Whisperers.

That is, unless Michonne was being literal when she said that Alpha had a nuclear bomb.

It's Why The Walkers Exist

What if that satellite is not just attracting walkers, but could help explain what caused the outbreak itself — as one reddit user posited? Eugene did assure his fellow survivors that they didn't need to worry about getting sick from satellite's radiation, as they are all already infected. When Eugene first arrived on The Walking Dead, he survived by telling a lie that he knew how to find a cure. It doesn't seem like TWD ever intends on ending the the zombie apocalypse, but it would be delightfully ironic if some part of the actual answer just landed in Eugene's backyard years later.

This theory also notes that the zombie apocalypse in George Romero's Night Of The Living Dead series begins with a satellite crashing to Earth. So this could just be an allusion to other zombie canon.

It's Simply A Fluke

"We'd been talking the the writers' room about what are different things that happen the more time goes on," said Kang per The Talking Dead. "We thought that it would just be like an interesting thing that we haven't dealt with before, and then see what things they can get from the satellite in terms of technology or to help them."

Maybe the satellite is not significant at all, and just something the writers thought might really happen. Granted, the second part of Kang's quote about "what they can get from the satellite" points towards some of the fan theories, but maybe this is just The Walking Dead exploring post-apocalyptic realism. If satellites are left unmanned for years and years because society has fallen, they're going to fall too.