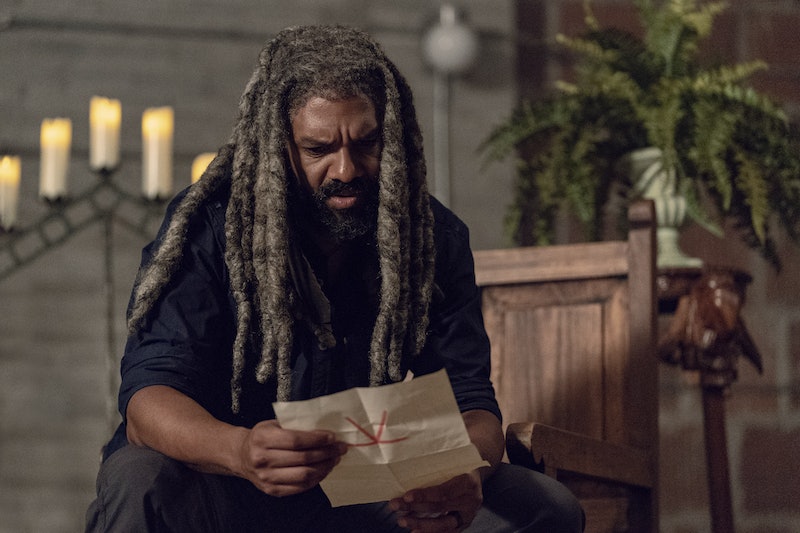 With the Whisperers, the survivors on The Walking Dead don't need any additional enemies. But the Kingdom will be meeting a new threat with the Highwaymen on The Walking Dead. These villains don't come from Robert Kirkman's comics, so there's not too much viewers of the AMC series know about them yet. But a preview clip of the March 10 episode, "Chokepoint," introduces this mysterious group that will pose a threat to the Kingdom's fair. And based on all the warnings of the community's struggles, the Highwaymen could possibly mean the end of King Ezekiel's Kingdom.

During the Alexandria council's discussion about joining the trade fair at the beginning of "Guardians," there was a lot of talk about the possibility of the Kingdom no longer surviving. "The Kingdom can take care of itself, they always have," former Savior Laura said. But when the others wanted to take a second vote about the fair, Michonne admitted that she would veto the decision. "The roads leading there are broken and dangerous and there is a group dressed as the dead who are trying to kill us," she said. But the preview of "Chokepoint" reveals that it will probably not be the Whisperers who will threaten the safety of those attending the fair. Instead, it will be the new group the Highwaymen.

In the above sneak peek, Ezekiel reads a ransom letter from this group. "We are the Highwaymen. The roads surrounding the Kingdom belong to us. All visitors attempting to travel to your fair will be turned back unless you pay our toll," Ezekiel reads. Dianne proposes that it could be the group of "renegade Saviors," but Carol knows for certain it's not them since she killed them in the midseason premiere while taking Henry to the Hilltop. And based on Ezekiel's comments it seems that Carol taking out Jed's crew may have been the opening the Highwaymen needed to threaten the Kingdom.

Although its orientation is reversed on the outside of the paper, these Highwaymen marked their letter with an upside-down red V with a horizontal line on top (or, you could argue it's a decomposed A). This symbol popped up in "Bounty" after the Kingdom retrieved the projection bulb from the movie theater. While it's debatable if it will have something to do with the A and B code that will ultimately play a part in the Rick Grimes movies, it's now absolutely clear that this symbol belongs to the Highwaymen. You can see it in the below photo on the wall behind Ezekiel.

After "Bounty," showrunner Angela Kang told Entertainment Weekly that viewers would be learning about who that symbol belongs to in Season 9. "What I will say about it is, we will learn who is attached to that sign at some point soon," Kang said. "Sooner rather than later, but I won't say exactly when. It does play into the season story is what I'll say." And she wasn't kidding about sooner rather than later since just two episodes later, the Highwaymen have made contact.

While Kang was stingy with any clues about the Highwaymen, there was a possible hint in the midseason trailer. A bearded man in a cowboy hat is shown coming to the trade fair at the Kingdom on a horse and he eyes up King Ezekiel's loyal servant Jerry. ComicBook.com identified this stranger as actor Angus Sampson from Fargo and theorized that he could be one of the Highwaymen. The Walking Dead wikia from Fandom has Sampson's character's name as "Ozzy" though it doesn't appear his name was officially released.

In the comics (slight spoilers ahead), the communities face a different threat at the fair, which occurs in Volume 24: Life and Death. The Whisperers sneak into the event and it has some seriously deadly consequences. While the Highwaymen might be filling in for the Whisperers at the fair on the TV show (or perhaps two villainous groups will attack this highly-anticipated event?), what occurs in the comics is not a good omen for King Ezekiel and the Kingdom.

When the fair was first discussed in Season 9, Alexandria not being involved seemed harsh. But now that Michonne finally got to articulate her reason for the decision in "Guardians," it seems the Kingdom is putting itself at risk just by existing — and Alexandria will inevitably put themselves at risk for participating in the fair against Michonne's better judgement. The Kingdom is too far removed from the other communities and don't have enough resources to take care of their people. So to Michonne's point, they might be better off relocating to Alexandria or the Hilltop. But with the promise of the Highwaymen, the Kingdom might not have the luxury of making that choice after the fair.