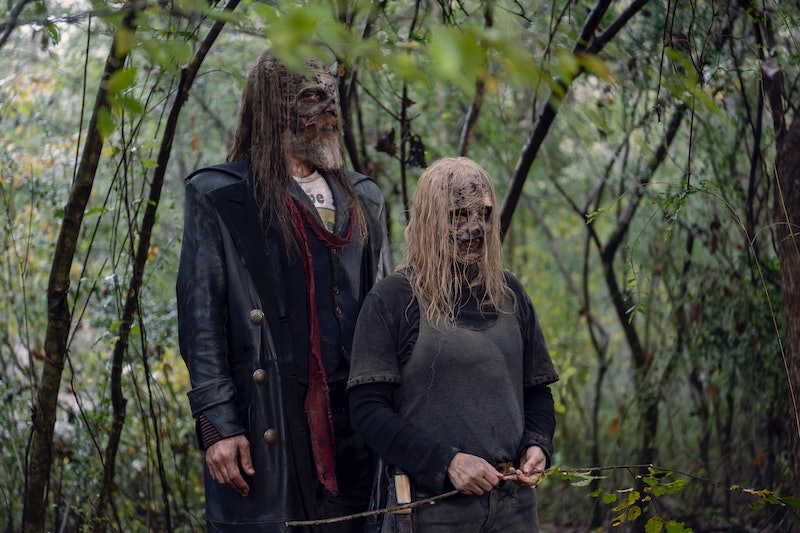 Spoilers ahead for The Walking Dead Season 10. Of all the things for Michonne to reveal about the Whisperers in The Walking Dead Season 10 premiere, "nuclear weapons" was probably pretty far down on anyone's guess list. Don't adjust your television set, you heard her correctly: Alpha and the Whisperers have nukes, apparently. This totally changes the game, and is a little unexpected for the antagonists compared to their comic book counterparts.

"They have a nuclear weapon and we don't," says Michonne in Sunday's premiere, plain as day, about why they need to keep their cool and not provoke the Whisperers. Pardon?! It's possible that she was speaking figuratively, like calling a tense situation a "ticking time bomb," or saying that Daryl has a "short fuse." But since there were actual nuclear reactors on Season 5 of Fear The Walking Dead, we have to consider that Michonne was talking about a literal nuclear weapon.

The subject of radiation is broached one other time in the episode, when Eugene "Eugenius" Porter is excavating a Russian satellite that falls from the sky and causes a massive fire. Luke asks him if touching the space junk might result in radiation poisoning. "There's radiation all around us," Eugene retorts, adding that due to the very nuclear nature of the zombie apocalypse, everyone is likely infected with some kind of radiation. That's unfortunately not a helpful clue about this Whisperer situation.

Some months have passed since the end of Season 9, so it's possible that Michonne and Aaron learned about this weapon in that time. As the fire at the end of the episode may have provoked the Whisperers into war, Michonne's claim is pretty serious.

Here are some questions raised by her revelation, besides the obvious "what?" and "how?" and "huh?"

Are There Nuclear Bombs In Virginia IRL?

Not according to a Mother Jones report of nuclear weapons locations from 2011, there aren't, but it's not improbable, especially in the fictional Walking Dead universe, that the Whisperers found a nuclear weapon around our nation's capital.

There are also a handful of nuclear power plants in the area. The headquarters of the National Nuclear Security Administration are in Washington, D. C. and there's also a Department of Energy complex not too far down the road in Germantown, Maryland that was headquarters to the Atomic Energy Commission in the Cold War era.

Since When Do The Whisperers Care About Technology?

The Whisperers live a pre-historic lifestyle, as far the comics go. They are uninterested in civilization, and have structured themselves like a wolf pack, taking on names like "Alpha" and "Beta" to signify roles. In the comics, the Whisperers don't even use guns except on rare occasions. They're nomadic in the comics as well — and nuclear weapons can't be easy to move. It just doesn't make any sense that they would ever seek out this kind of advanced weapon.

What Else Could This Mean?

If Michonne wasn't being literal, what was she talking about? Besides stealth and cruelty, the Whisperers don't have that many advantages. Maybe this has something to do with the new Whisperer named Gamma, played by Thora Birch. Calling her a "nuclear weapon" would be a play on radiation (gamma ray... get it?) but science puns just don't seem like Michonne's style.

That said, if a hydrogen bomb showed up on Lost in Season 5, then a nuclear bomb can logically show up The Walking Dead in Season 10. Why not, right? In retrospect, it's unfortunate that all Rick Grimes got from his trip to the Smithsonian was a lousy covered wagon.