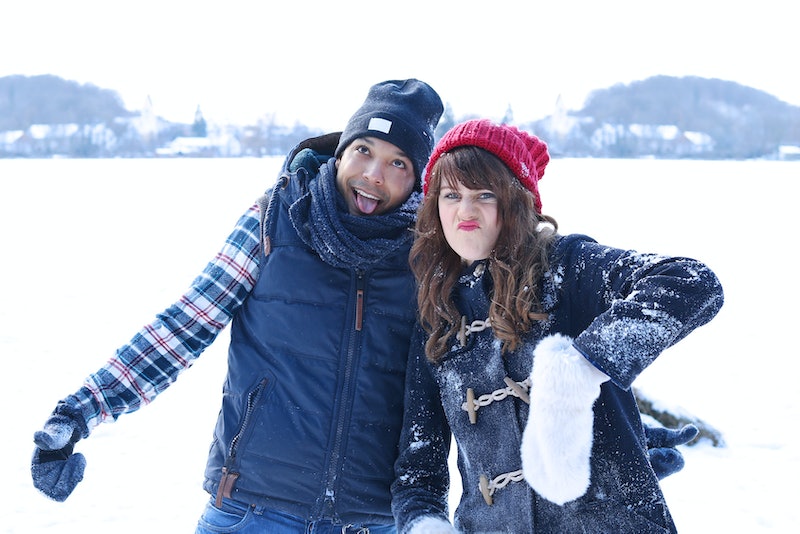 Relationships can be strange. I mean amazing, but strange. You think that you're just a normal couple, wandering through life, and then suddenly a friend catches you asking your boyfriend to check your nose for boogers and you wonder... how did we get here? Yeah, weird relationship habits sneak up on you.

It doesn't start out that way. In fact, normally it starts with just the cutesy stuff. Maybe it's texting in nothing but emojis and code words, but that's pretty normal. "Sending texts is a good way to let your partner(s) know you are thinking of them," says Shamyra Howard-Blackburn, a licensed clinical social worker who specializes in sex and relationship therapy, tells Bustle. "It can also heighten the suspense on what to expect when you see them again."

See? Totally normal. Then suddenly it can go beyond the cute and into the... well, into the full-blown weird, booger-checking territory. But I think you need to embrace that— because actually, the weird stuff is normal. In fact, I don't know any couple that doesn't have some distinctly strange behaviors or quirks. It's just part of what makes the two of you who you are as a couple. Some habits are common in a lot of different couples and you probably have some that are totally unique to you.

So don't worry about quirky habits you guys have. Just check out these 'weird' relationship habits that are totally normal: