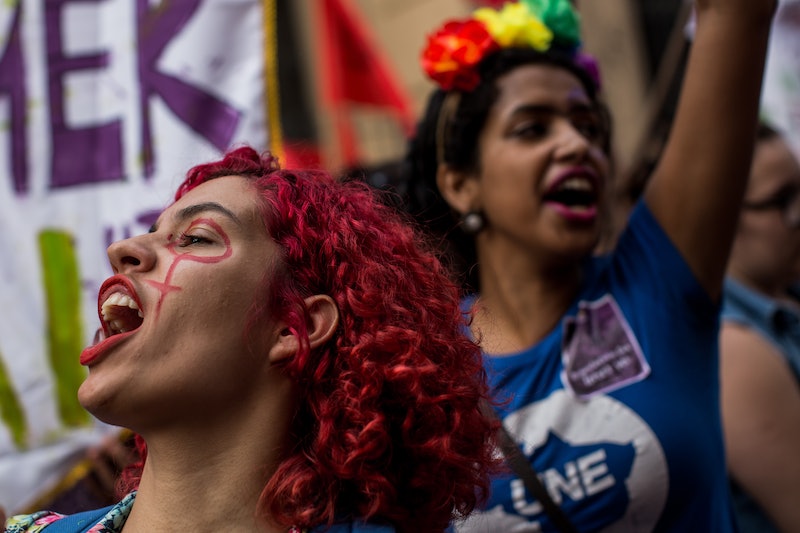 To many outside of feminist thought and activism, the term "feminism" denotes various things — the bra-burning Women's Lib movement on the '60s and '70s, the Lena Dunham and Hillary Clinton-style feminism of today, or just the overall concept that women should be equal to men. For those within the movement, however, there's often disagreement about who exactly feminism is for. If you aim to include all women and femmes in your feminism, then there are some overlooked communities and issues you must support to call yourself a feminist.

The phrase "intersectional feminism" was put on display during the women's marches that swept the nation the day after Donald Trump was inaugurated president, but it's long been a necessary and occasionally contentious concept. The term "intersectionality" was coined by law professor and leading critical race theorist Kimberlé Crenshaw in the 1980s, and is based upon the idea that different "intersections" of oppressions (such as race, class, sexuality, ability, gender, and many others) work in tandem, specifically how with gender oppression hurts women who come from other minorities more so than white women.

It's long been a term used in gender and feminist theory in academia, but has only reached mainstream political consciousness in recent years as more and more women demand a seat at the table of the feminist power structure headed by largely white groups such as Planned Parenthood, NARAL, and others of their ilk.

Intersectionality is an important and powerful term to claim, but in order to live it, one must support people targeted by more than one "axis" of oppression. Below are some of the most important movements and issues for intersectional feminists to support.

Feminist support for the Black Lives Matter movement, especially from feminists who aren't Black, is something of a litmus test for intersectionality. To many, it seems obvious that supporting BLM and the fight to end police brutality is indeed feminist because, of course, Black women have been killed by police at overwhelmingly high rates.

Even when the victims of police brutality are not women, supporting Black people and proponents of BLM is simply the right thing to do for anyone looking to make the world a better and more equal place. There's a number of ways to support BLM — monetary donations are, of course, excellent, but you can also attend meetings at your local BLM chapter or find groups associated with the Movement for Black Lives. And at the very least, sign up for their newsletter to learn about news related to the movement and events that may be coming to cities near you.

When mainstream feminists do discuss trans women, they often do so in mourning for the dozen trans women of color murdered every year in the US. Many within the TWOC community lament how they are only discussed in death. Support for these women and femmes must come before they become another name on the growing list of women murdered every year.

If you live in or near a metropolitan area, it's likely that there's already groups organizing to help Black trans women and other TWOC near you. Some excellent support organizations in large cities include Washington, D.C.'s Casa Ruby, the Trans Women of Color Collective, the Sylvia Rivera Law Project (named for the incredible trans icon Sylvia Rivera), and Familia: Trans Queer Liberation Movement.

Finally, there's a ton of other small and large ways to support trans women of color, which includes simply asking TWOC you meet what they need.

The Fight Against Ableism

Despite broader understandings of intersectionality among otherwise privileged progressives, ableism remains an elephant in the room in many circles. Ableism is loosely defined as any discrimination against people who have disabilities, and while much of this discrimination is institutional, systematic, and cultural, ableism exists in feminism as well.

We need to address and work to change statistics that find that a large majority of disabled women are sexually assaulted, reform our use of ableist language, and work to end the disability stigmas that lead to anti-vaccination and ableist pro-choice rhetoric, in order to make feminism accessible and inclusive to everyone.

In 2016, indigenous rights broke out into the mainstream during the protests at the Standing Rock Sioux reservation in North Dakota as water protectors rallied against the Dakota Access Pipeline that threatens their water source. That battle did much to bring the plight of modern indigenous people into the American consciousness, but it's unfortunately only a facet of issues facing indigenous people.

There are many missing and murdered indigenous women in Canada and in the United States, and the multi-pronged oppressions of racism, classism, and misogyny unduly affect these women who are too often ignored by mainstream feminism.

To combat this intersectional oppression, one must first learn about the genocide of indigenous people in the Americas and throughout the world to truly begin to understand the generational trauma these women experience.

Muslims, Both In The U.S. & Abroad

In recent years, Islamophobia has become a hot-button feminist issue, but there's still a ways to go to for feminism to truly tackle this issue that immensely affects Muslim women. While much discussion has been centered on Islamophobia in North America and Europe, we must also work to combat Islamophobic policies that our countries enact or support abroad — not the least of which being the continued apartheid in Palestine, a policy which Western nations tacitly (and sometimes overtly) support by continuing to ally with and send aid to Israel.

One of the biggest wake-up calls in the 2016 elections took place around the issue of class — while Bernie Sanders deftly spoke to the working classes, Hillary Clinton failed to do so, and that failure to appeal to members of the lower American classes likely contributed to her loss. Unionization and the labor movement at large is a major part of American workers' history (we have them to thank for the eight hour work day), but the labor movement has a racist past of its own.

While much of the modern labor movement, such as the Fight for $15 organization, does address and center people of color in its organizing, much of mainstream feminism, like the "Lean In"-style feminism preached by elite white women, has failed to properly address the classism and racism inherent in its second wave.

As with all the other intersecting axes of oppression, race, class, and gender work in tandem to keep poor and working class women of color down.

Recent years have seen incredible gains in the form of body and fat positivity. For the first time ever, larger people are speaking out about the discrimination and harassment they face in their love lives, at the doctor's office, on the street, and from society in general. These gains are to be celebrated, but they haven't come without a cost — the supposed body positive movement has managed to leave out a majority of women of color in their celebration of fat bodies, despite how fat women of color experience the dueling oppressions of fatphobia and racism.

So much of body positive activism has taken place online, and this unbearable whiteness can be fixed by highlighting the beauty and struggles of fat/plus size women of color as much as (or more so than) fat or plus size white women.

You may have noticed throughout this article and elsewhere the use of the phrase "women and femmes." This phrase aims to include nonbinary or genderqueer people in discussions of misogyny and feminism, because many people affected by misogyny (myself very much included) do not identify as women. The use of more inclusive phrases like "women and femmes" or the singular "they" speaks to an understanding of the expanding language of gender and sexuality, but unfortunately, there are still subsets of feminism that see feminist issues as explicitly female (and, at times, explicitly cis female).

Understanding the importance of sexuality and gender language doesn't just help nonbinary and non-cis people feel more welcome in feminist spaces — it also combats the disgusting existence of trans-exclusionary radical feminists who believe that trans women are men in disguise.

There are, of course, countless other nuanced and complicated issues that feminists need to care about, but these often overlooked problems are an important part of every healthy feminist diet, and need just as much support and attention as more "classic" feminist issues like rape culture, reproductive justice, and equal pay.