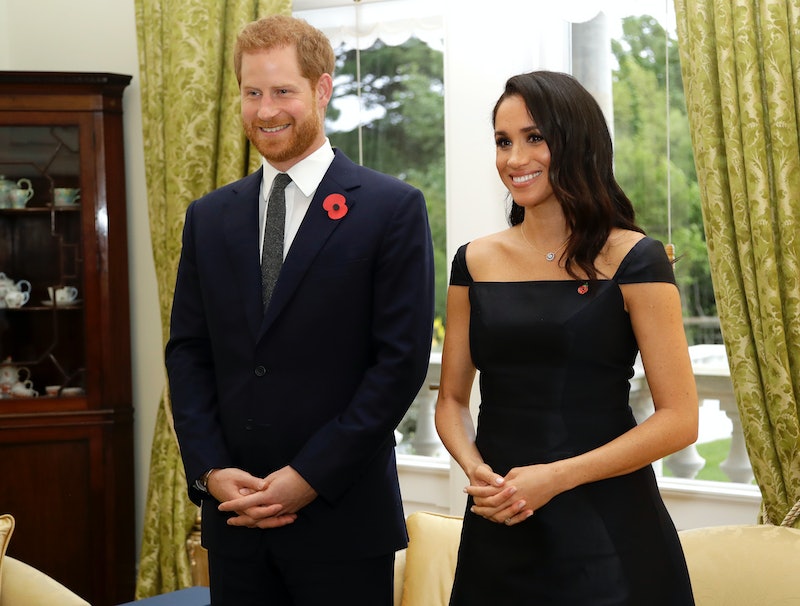 Meghan Markle and Prince Harry's baby is almost here, and royal baby fever is... um... at it's highest temperature? Fever metaphors aside, Baby Sussex is coming any day now, and fans of the couple and the royal family at large can't wait to find out the new royal baby's name. What will it be? Elizabeth? Arthur? Diana? Elizabeth Arthur Diana?

There are a few names — including the ones above — that are expected and have the best betting odds, but Markle and Harry might switch things up. A lot of the names with the best odds are tied to Harry's family or are just more traditional British names, but Markle is an American and might want some of her history in the name, too. After all, this baby is going to be seventh in line to the throne and not in the direct line, either, so there's some flexibility that could allow the couple to go a different route. As a point of comparison, with Kate Middleton and Prince William, choosing with very traditional names had to be influenced by the position they're in — Prince George Alexander Louis is going to be king someday.

So, what names are there that could make sense for Markle and Harry to choose, but that would still be unexpected? Here are a few.

The name with the best odds overall is Diana, obviously after Harry's mother. But what about Markle's mom's name, Doria? On the one hand, it might make more sense to honor Diana over Doria since she is no longer with the family and passed away when Harry was so young. But, who knows, maybe they'll go with both. Diana Doria, perhaps?

Markle's has long gone by Meghan, including for her acting career, but her given first name is Rachel. When she joined the royal family, Markle didn't convert back to Rachel, so now she's officially Meghan, Duchess of Sussex. Maybe she will want to include her former name Rachel in the baby's name.

Another name that's not out of the question is Frances, which was Princess Diana's middle name and her mother's first name. Oddschecker has it at number 13 on the list of names available to bet on, and it has been talked about as an option in various reports, but it isn't considered super likely, like the names Victoria, Diana, Alice, Arthur, and James. Frances is the way the name is normally spelled for a girl, but if they have a boy they could also go with Francis.

Similar to Frances is Spencer, Princess Diana's last name. Again, it's been thrown around as an option (by the media, but hey, maybe by Markle and Harry, too), and would be a way to honor Diana if they end up having a boy. Pure Wow also notes that apparently Diana called Harry "my little Spencer" because his red hair came from her side of the family.

Hello! magazine reported that on her dearly departed blog, The Tig, Markle once wrote that one of her favorite baby names was Grey. Does she still like it? It would bring a certain American hipster parent vibe to the royal family.

The Daily Mail has reported that Markle was very close with her maternal grandfather, Alvin, who passed away in 2011, so maybe he'll get a shoutout. A source told the publication, "Meghan loved her grandfather very much and he absolutely loved her. He would have loved to have seen her fall in love and marry Prince Harry and she would have loved him to live to see it too."

There's also Markle's maternal grandmother's name, Jeanette. The Daily Mail also reported on her pre-royal wedding and explained that she helped raise Markle. Jeanette passed away in 2000. Since it's very common for girls in the royal family to be named after Queen Elizabeth, Markle and Harry could decide to honor two of their grandmothers with Elizabeth Jeanette or Jeanette Elizabeth.

Wildcard alert! Markle is from California and her home state means a lot to her as evidenced by her coat of arms. The name Cali would be a cute tribute to her roots, but, admittedly, there is a zero percent chance she's going to do this. (Unless she's reading this story? Hello? Meghan?)

It won't be long now until we find out what we've all been waiting for: Which family members the baby will be named after and whether it will sound like the name is from 1719 or 2019.