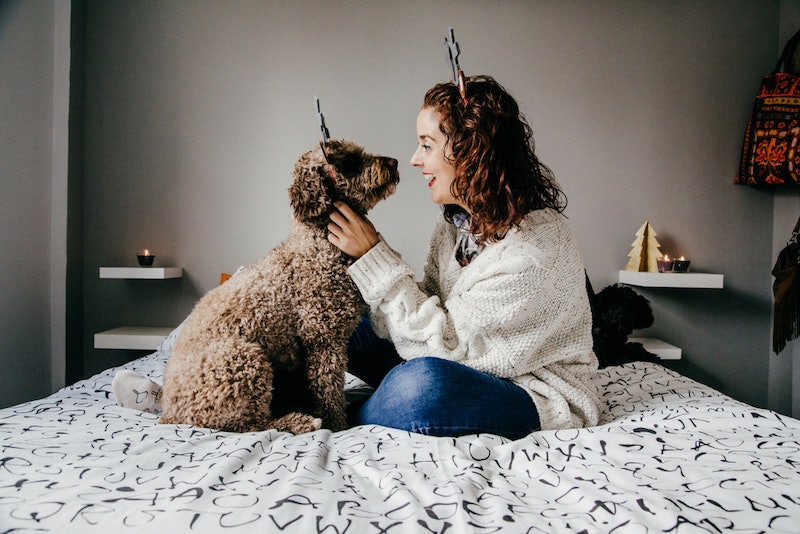 Almost everyone who has a dog knows that they tend to mimic the personalities of the family they live with. Turns out, dogs are conditioned to behave in certain ways that humans do. These little habits dogs have can look a lot like yours.

The benefits of having a dog are plentiful (even though it can be really hard sometimes). But as cute as it is when a dog starts to mirror your behavior, it's also important to understand that you have a responsibility to not condition them into anything that isn't good for their wellbeing.

"Dogs are very observant and will witness and take in more visual and auditory stimulus than their humans may notice," Stephanie Liff, DVM, of Pure Paws Veterinary Care, tells Bustle. "Because of the vigilant nature of dogs, they are likely to pick up some habits they are witnessing regularly from their human." While sometimes, sharing habits may also mean that you have to be careful not to encourage some of the less-positive behaviors — even if they're really cute — it mostly means that your dog will find ways to fit happily into your routine, and your life in general.

A lot of the habits dogs share with their owners, however, may seem like intuitive dog behaviors. Turns out, a lot of the time, they're just adapting to fit into your life. It's another reason dogs are so likable.

Here are eight weird habits you didn't know dogs adopt from their owners, according to experts.