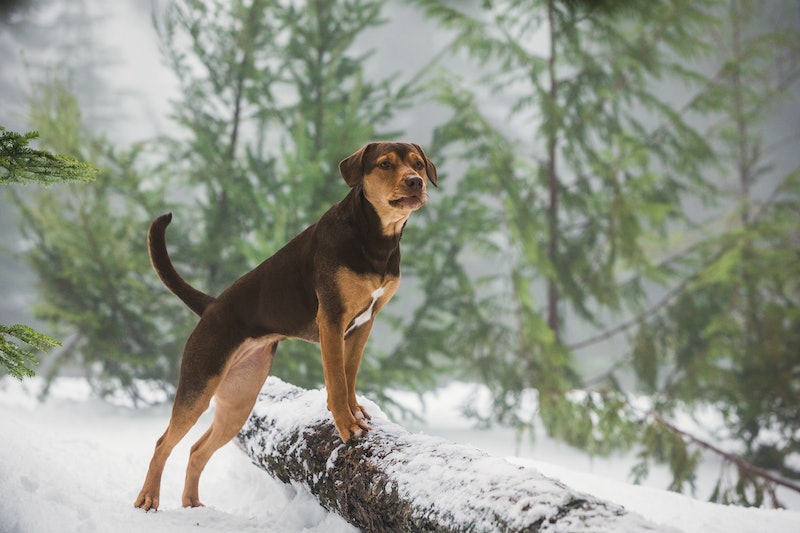 It's January. The holidays are over. The fun of New Years has worn off and we're all reluctantly diving into our resolutions. We're about to head into the long slog that is the rest of winter. We'll no doubt be complaining about the cold, dark, dreary world for the next two months before the first tulip bulb finally pops. What do we all need? Puppies!! And kittens! And other cute, cuddly animals! A Dog's Way Home hits theaters on Jan. 11, just in time to bring a squee-ish smile to our faces. And if you need some more cuteness to brighten your winter days, there are plenty of other animal movies streaming now.

Based on the novel of the same name by W. Bruce Cameron, the same guy who brought us 2017's puppy reincarnation weepie A Dog's Purpose, A Dog's Way Home tells the story of Bella, a dog who embarks on a 400-mile journey to be reunited with her owner. The movie's trailer is clearly tugging at those heartstrings that lead us to love sad puppy movies, but it also kind of hilariously gives away the entire movie, as if it really wants us to know that the dog definitely does not die. But if you can't make it to the theaters or just need a good kick of fluffy happiness in the meantime, here are nine other movies you can stream right now that will hit the spot.

A Dog's Way Home definitely feels like it was inspired by 1993's Homeward Bound: An Incredible Journey. The movie tells the story of three pets who need to make their way across the wilderness to find their child owners again. The voice cast is what makes it great, with Sally Field as prissy cat Sassy, Michael J. Fox as pit puppy Champ, and Don Ameche as the wise old Shadow.

Call it a manipulative tear jerker or an accurate portrayal of dog ownership, Marley & Me is certainly fun. Based on the memoir of the same name by John Grogan, Marley & Me follows a family's attempt to live with and love the "worst dog ever."

This one is definitely going to make you cry, so get those tissues ready. Richard Gere stars in this film that's based on a true story about a Japanese Akita named Hachiko. Gere plays a college professor who has an incredibly close bond with his dog, Hachi, who waits for him at the train station every day to come home from work. When the professor dies suddenly, the dog spends years waiting at the same station for his master to come home.

Kittens deserve some love too, and while Keanu might break the mold of traditional "cute animal movie," that kitten sure is darned cute. From the minds of Jordan Peele and Keegan Michael Key, Keanu is like a two hour Key & Peele sketch styled like John Wick and starring a tiny adorable kitten.

If puppies and kittens aren't your thing, how about some cute farm animals? The "baby pig becomes a sheep dog" movie Babe is so adorable, it made people stop eating bacon for about 10 minutes. The film also ushered in a new type of CGI to make the animals really look like they're talking and it still pretty much holds up to this day.

Based on Jack London's novel of the same same, White Fang stars a super young (and super cute) Ethan Hawke as a young man who heads to Alaska for the gold rush there. His wilderness adventures lead to a friendship with a wolf that is part dog, and anyone whose ever wanted a Husky pup will love this movie. The novel has also been turned into an animated series on Netflix.

The era of Disney making live-action remakes of its animated classics doesn't look like it's going to end any time soon. And this year's Dumbo, (which admittedly does look adorable) and The Lion King are about to join 2016's The Jungle Book as one of the ones that heavily feature both adorable and ferocious, animals.

An oldie but an essential film to watch if you're a fan of movies featuring animals. 1957's Old Yeller is definitely a tear jerker, but it's the grandfather of all of these other movies, and definitely inspired that best-friend feel that every cute dog movie needs to nail.

9. The Secret Life of Pets

If animation is more your game, Illumination's The Secret Life of Pets has all of the cartoon cuddlies that you could ask for. The movie explores the shenanigans that pets get into when their human owners aren't around. And there's a sequel coming this June, with Patton Oswalt taking over lead voice duties from Louis C.K.

We all might need a little puppy cuddle this winter. Thankfully these movies can cure the cold with some cute.

More like this
These 25 International Horror Movies On Netflix Prove Fear Is A Universal Language
By Bustle Editors
What’s New On Netflix: Ana De Armas’ 'Blonde' & A Nick Kroll Special
By Arya Roshanian
Here’s Everything Coming To & Leaving Netflix In October
By Jake Viswanath
Lindsay Lohan & Jonathan Bennett Celebrated Mean Girls Day Very Differently
By Jake Viswanath
Get Even More From Bustle — Sign Up For The Newsletter