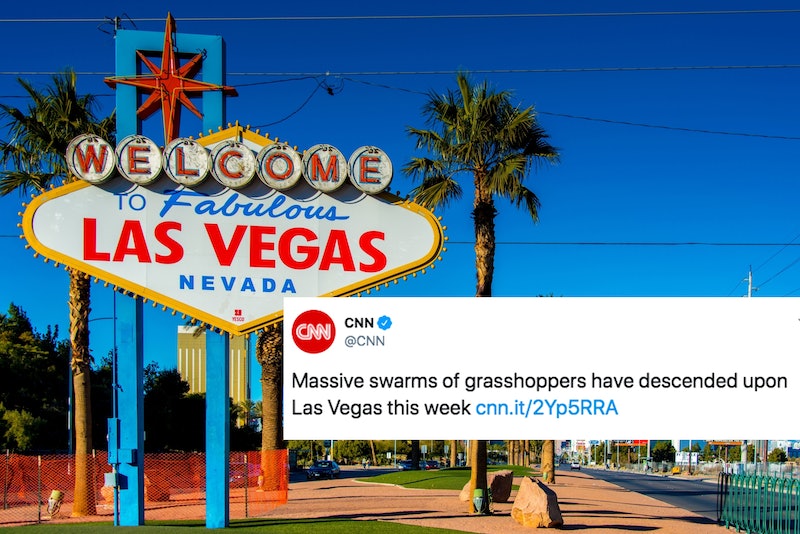 Summer is usually filled with bugs — and right now, there is perhaps no city that understands that quite like Las Vegas, Nevada, where it's currently raining grasshoppers. Literally. I know that sounds ridiculous, there are actual photos and videos of Las Vegas's grasshopper invasion on the internet that will make you never want to go outside again. It actually looks kind of apocalyptic, in a way — but, don't worry, although this fog of insects is terrifying, the end is not near. Instead, weather can explain this influx of grasshoppers that's so massive it can be seen from space. Much like California's Super Bloom, except this is not anything like California's Super Bloom.

According to CNN, Nevada Department of Agriculture's entomologist Jeff Knight said, "It appears through history that when we have a wet winter or spring, these things build up often down below Laughlin and even into Arizona." Nevada has had an above average rain fall this year and a cool spring which could explain the most recent tourist invasion to the neon strip. Though there's some reason for this migration there is still no reason to go outside.

The grasshoppers are hoarding sidewalks, they're fluttering in masses under street lights, they're all over marquees on the Las Vegas Strip — they're everywhere. Las Vegas is known for their spectacular shows and, to be honest, this invasion of grasshoppers does not disappoint. But, if you're — understandably —not really in the mood for this kind of show, stay indoors.

Unfortunately, I wouldn't ~bet~ on this invasion clearing up anytime soon. According to Forbes, this invasion could last weeks. Cozy up to the casino buffet and say "no thank you" to any invitations that require you to face the outside world. If you need further convincing to stay inside, please refer to the pictures and videos below.