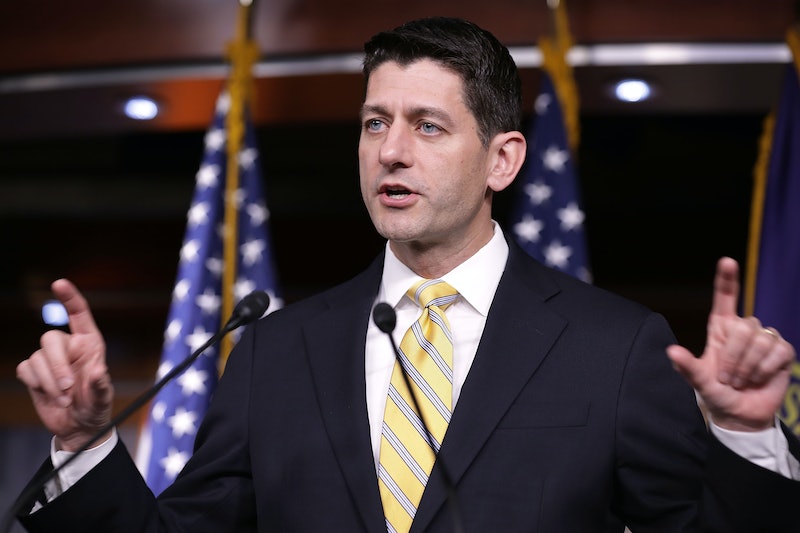 On Thursday afternoon, the House passed the American Health Care Act. Although the bill still has to pass the Senate in order to become law, it's a massive blow for a huge amount of the population — because the AHCA is anti-feminist in pretty much every way possible. It is abundantly clear that the GOP’s proposed health care plan was not created with the health of people who are female, LGBTQ, disabled, low-income, or basically anything other than wealthy, white, cisgender, heterosexual, and male, in mind. And millions will suffer as a result.

A revision of a bill scrapped before even making it to a vote in March, the latest version of the AHCA will still likely leave some 24 million people without insurance by 2026, as the nonpartisan Congressional Budget Office stated the original would. If the latest bill doesn't pass both the House and the Senate, those people would continue to receive insurance under the Affordable Care Act (ACA), colloquially known as Obamacare. The math matters: As projected by the Los Angeles Times, the proposed GOP plan could nearly double the number of uninsured people by 2026, from 28 million if Obamacare is kept to 52 million if it is repealed and replaced with the AHCA.

While the ACA is not without its flaws, the AHCA presents a whole new set of problems. In fact, Republican lawmakers have had a difficult time defending the AHCA, with Trump himself seemingly unaware of what is currently in the health care bill. Trump has repeatedly stated his intention to create a health care plan that “won’t leave people dying in the streets.”

An amendment to the bill itself reads, "Nothing in this Act shall be construed as permitting health insurance issuers to discriminate in rates for health insurance coverage by gender." But if health care is truly meant to preserve and save lives, to be seen not as a privilege, but a human right, to be affordable and accessible to all people equally, regardless of things like gender or socioeconomics, there are at least nine ways the AHCA does not fit that bill — and likely plenty more: