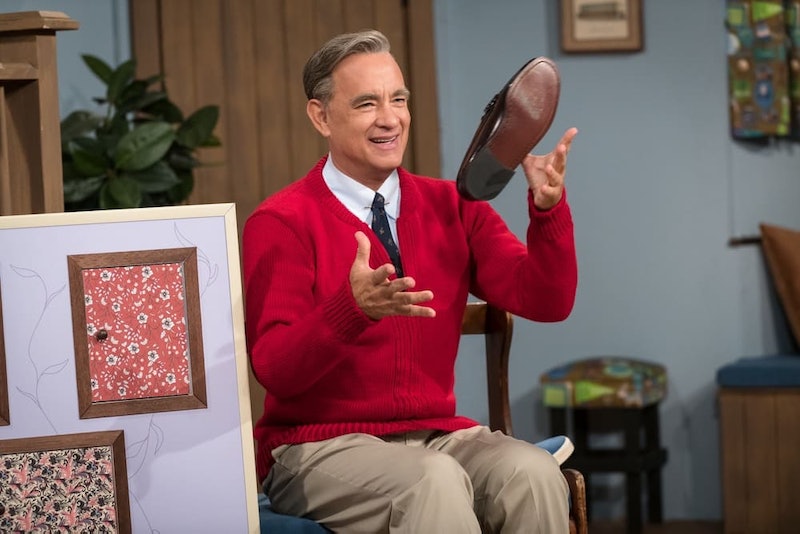 It's the part he was born to play. America's most wholesome actor, Tom Hanks, portrays the world's most wholesome human, Fred Rogers, in the new film A Beautiful Day in the Neighborhood. It should be obvious to anyone who grew up watching Mister Rogers' Neighborhood that A Beautiful Day in the Neighborhood is based on a true story, but there's more to it than that. The film isn't your average biopic, but rather is based on an article by journalist Tom Junod titled "Can You Say... Hero?" that appeared in a 1998 issue of Esquire.

Since the movie is, well, a movie, it naturally makes some adjustments to the truth. The film's protagonist is journalist Lloyd Vogel (Matthew Rhys), a cynic who is assigned by his editors at Esquire to write a profile on Rogers. As he gets to know the children's TV show host, Vogel's entire outlook on life changes and he becomes a better person through his interactions with Mr. Rogers. That's all well and good, but Lloyd Vogel doesn't exist in real life. He's a character actually inspired by Tom Junod, who penned the real-life Esquire article on which the movie is based. So what was so special about this article that it inspired a movie starring Tom Hanks?

One aspect of Junod's article that is special and movie-worthy is that it gives a clear look at the effect Fred Rogers had on people, even beyond the confines of his television show. Regardless of age or background, it seems that no one was able to resist being charmed and inspired by the soft-spoken TV presenter — including a cynical 40-year-old reporter. Junod's piece also is more narrative than many journalistic profiles, as it's told through the author's eyes with an emphasis on how his subject — Mr. Rogers — is affecting him in real time.

This transformation is especially impactful coming from Junod because he was assigned to write the article on Rogers specifically because of his reputation of being a rather nasty journalist, having made a name for himself with veritable hit pieces on actor Kevin Spacey (well before his #MeToo scandals) and NFL quarterback Jeff George. "I was assigned the story about Fred because one of the editors at Esquire thought it would be amusing to have me, with my stated determination to 'say the unsayable,' write about the nicest man in the world," Junod wrote in a new piece for The Atlantic. "I was too old to have grown up watching Mister Rogers’ Neighborhood, and knew him primarily as the parodied version of himself."

But despite his initial skepticism, Junod couldn't help but be overtaken by Rogers' outlook on the world as he got to know the man, and he essentially became a convert to Rogers' way of thinking. "Many times my wife and I ask each other, 'What would Fred Rogers do?' And I’m not kidding,' Junod told Atlanta Magazine's Suzanne Van Atten. "I’m at my best as a father when I try to think what Fred Rogers would do, and I’m probably at my worst when I think what my own father would do."