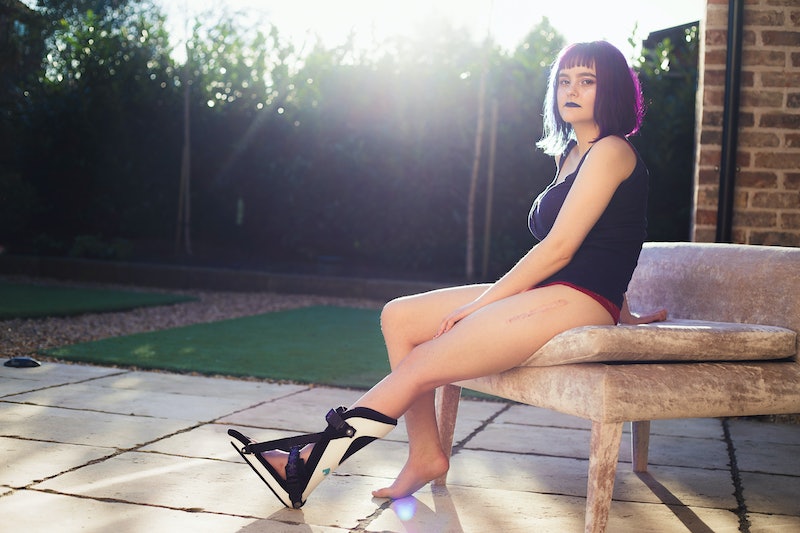 With award-winning photographer Substantia Jones of The Adipositivity Project and Manchester-based photographer Paddy McClave, Bustle is launching A Body Project. A Body Project aims to shed light on the reality that "body positivity" is not a button that, once pressed, will free an individual from being influenced or judged by toxic societal beauty standards. Even the most confident of humans has at least one body part that they struggle with. By bringing together self-identified body positive advocates, all of whom have experienced marginalization for their weight, race, gender identity, disability, sexuality, or otherwise, we hope to remind folks that it's OK to not feel confident 100 percent of the time, about 100 percent of your body. But that's no reason to stop trying.

I see Scarlett Bacchus-O'Callaghan's purplish blue hair long before I see the rest of her. She is rounding a street corner, making her way to our shoot location. The color stands out in this particular part of English suburbia, where lawns are pristinely mowed and cars seem untouched and un-driven.

I quickly learn that Bacchus-O'Callaghan's hair color mirrors her personality. She speaks quickly and excitably. Even when wearing her leg brace, there is an energy to the way she moves, which is not quite a bounce but not quite a glide. Taking in her skirt featuring Vincent van Gogh's Starry Night, start to think about the relationship between bodies and art. As the sun catches the scars on her legs — an aspect of her body that many would deem a "flaw" — they look cool and artsy and beautiful.

"I’ve been this way for as long as I can remember," Bacchus-O'Callaghan later tells me. "This way" references her Cerebral Palsy Spastic Diplegia, which can make the arms and legs very contracted. The condition generally causes chronic stiffness and pain, often treated (but not cured) through braces, walkers, and sometimes surgery. "My mum told me that the [diagnosing] doctor was cruel [...] He said I’d always be small, and joked that I’d never compete in the Olympics."

Bacchus-O'Callaghan adds that the "joke's on him." She's the tallest woman in her immediate family and while she won't be competing in the Olympics anytime soon ("I’m sure I could if the thought of exercise didn’t bore me to tears") she'll be attending one of the best universities in England this fall. Even so, however, she's struggled to accept her legs.

"I think I’ve almost always been at least a bit body conscious and aware of how I look," the 19-year-old says. "I remember in primary school, I must have been under 10, I really started hating the fact that I had to wear splints/leg braces and being really self-conscious of them. Some teenagers made mocking comments about how not stylish they were with a skirt I was wearing and from then on I refused to wear skirts [or] dresses with my splints."

She recalls throwing tantrums when asked to do so, the thought of people seeing her legs in those "big, bulky, ugly, uncomfortable" splints enough to bring on the tears. "I refused to let my mum buy my school photo because I had worn a dress with my splints," she adds. The Cerebral Palsy had also made it difficult for Bacchus-O'Callaghan to gain weight in her legs, making her feel disproportioned and clumsy.

"I want us to be shown as human, rather than cute and desexualized and childlike and inspiration-porn objects of pity," she adds. "I want goth cripples, trans and gender non-conforming cripples, black, white, mixed, brown cripples, queer, and gay, and pansexual cripples who drink and smoke and have sex and break hearts. Unapologetic, angry cripples. Cripples who aren’t inspiring, who don’t compensate for their disabilities in some way; who aren’t happy [...] but [are] still beautiful and worthy."

With such representation, she'd also want to see less cultural stigmatization around the word "disabled" as well. She believes that the term "'differently-abled' is so condescending," adding, "I don't know any disabled people who prefer the term 'differently-abled,' but I know lots of able-bodied people who are more comfortable with it than 'disabled.'"

The future sociology and social psychology major is almost always in some degree of pain. Sometimes she can barely walk. That's what living in her body is like — and although she's struggled with self-love in the past, it's changing her perceptions of her disability that have made all the difference. Her Cerebral Palsy doesn't have to be a "good" thing or a "bad" thing. It's just a thing.

Useful tools when it has come to loving her legs, in particular, have included everything from video games, to writing, to fashion. In terms of the latter, she says that "dressing up and wearing pretty things" has allowed her to start observing her body in different ways. "Forcing myself to wear revealing clothes and show my legs, even with the skinniness caused by muscle wastage thanks to Cerebral Palsy" has allowed her to reevaluate the intersections of worthiness and accessibility with style. Is it only perfectly able-bodied, perfectly conventionally attractive people who should have the freedom of sartorial exploration, or is it anyone who wants it?

Bacchus-O'Callaghan's definition of beauty isn't at all conventional. This is very likely why she rocks "unnatural" hair colors; why you can catch her trying white freckles, neon cat eyeliner, and black lipstick on her Instagram. It's why she'd describe her aesthetic as "fairy goth," or "goth but with a bit more whimsy and freedom."

It makes sense that her advice to those struggling to embrace their disabilities goes against the transformation narratives upheld by Western cultures at large. Narratives like, "If you don't love your fat, lose weight and you'll be happy." Or, "If you don't adore this part of your face, get plastic surgery and you will be happy."

"Don't try to be pretty like someone else," Bacchus-O'Callaghan says. "Be pretty like you. Stop hanging around with people who aren’t good for you, or who make you feel bad about yourself, even if it means you end up alone. Learn to be happy with just yourself. Your appearance isn’t everything and you don’t owe anyone prettiness. Other things are more important."

In not trying to be "pretty," Bacchus-O'Callaghan has seemingly grown more comfortable in her skin and in her leg brace alike. Although she doesn't always wear it when she's supposed to, she doesn't always feel hideous or flawed when she does. This is a tangible improvement.

She adds that "trying to be the prettiest and cleverest girl to compensate for [her] Cerebral Palsy" often proved to be extremely unhealthy and stressful. Instead, self-love has been a process of learning to appreciate the things about herself that have nothing to do with her body at all. It has been an unlearning of the ideologies that say she has something to "compensate for" in the first place.

So, "Learn a skill [or] do things that make you love yourself that aren’t based on your appearance," Bacchus-O'Callaghan advises. Be open about your disabilities and find people who can relate to what you're experiencing. Be creative. Experiment with makeup. Wear clothes that make you happy. Take selfies. Recognize that imperfection is human. And the rest — the self-love — might just follow.