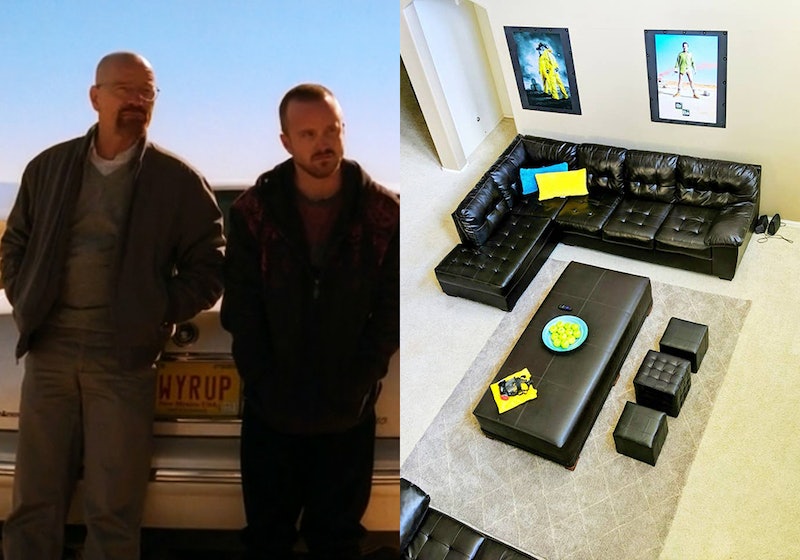 This is a pretty big week for fans of Breaking Bad who have been missing the show and all of the characters that came with it. Six years after the show's series finale, creator Vince Gilligan and Netflix released a teaser for a surprise Breaking Bad film called El Camino, which will follow Jesse Pinkman after the events of the series. If you're ready to be fully immersed in everything Breaking Bad again, you're not alone — and luckily, you actually can be. A house featured in Breaking Bad is on Airbnb and available to rent right now — so if you're a fan of the show and can get yourself to Albuquerque, New Mexico, it's kind of a great deal.

Before you panic in excitement, allow me to answer the most important question: no, this is not the house from Breaking Bad where Walter White and his family lived and threw pizzas on the roof of. The home that is open for rentals on Airbnb is from Season 5, Episode 3, "Hazard Pay." Just to freshen your memory (it has been a while), here's what happens in the home during the show: The owners are getting the home tented and fumigated by a pest-control team, and Walt and Jesse Pinkman decide it's the perfect place to sneak in and use as a temporary meth lab. The two do exactly that, donning yellow hazmat suits and setting up an impromptu spot to make their drugs while the owners have absolutely no idea what's going on.

The house, which is called Breaking Bad House 5.3 on Airbnb, is located in Albuquerque, New Mexico, and is only about a half hour drive away from other Breaking Bad hotspots: the White house and Jesse's house, to name a few. It's a perfect spot to book if you want to have yourself a little Breaking Bad tour in New Mexico.

It also has plenty of room for a bunch of guests, along with some great features to make your stay even more fun. There are four bedrooms, 12 beds (the page says it can host 17 people), three bathrooms, a BBQ grill with an outdoor patio and fire pit, and a pool table. Maybe the best part? It's only $259 each night. That's a pretty great deal for such a large house, and the fact that you can fit up to 17 people comfortably means that you can split up that price so that it costs almost nothing. Plus, New Mexico is a very cool state to visit, whether you're interested in Breaking Bad or not.

Obviously, the house embraces its connection to Breaking Bad, and takes it very seriously. In the photos on the Airbnb site, you can see posters from the show hanging on the wall, and people in yellow hazmat suits and Vamanos Pests suits hanging out on the couches. 10/10 recommend doing that as a guest, especially since the suits are there for the best photo opportunities.

If you're interested in renting the home for a few nights, you can check out the Airbnb page, which, at the moment, features plenty of availability. Happy vacation planning!

More like this
Yes, You Can Really Charter Below Deck Med’s New Superyacht, Home
By Brad Witter
Eleven From ‘Stranger Things’ Is A Cancer Zodiac Sign, An Astrologer Says
By Brittany Beringer
20 Genius Kitchen Storage Solutions For Decluttering Your Space
By Emma Garza
Is The Insta-Famous Always Pan Actually Worth It?
By Jessica Goodman
Get Even More From Bustle — Sign Up For The Newsletter