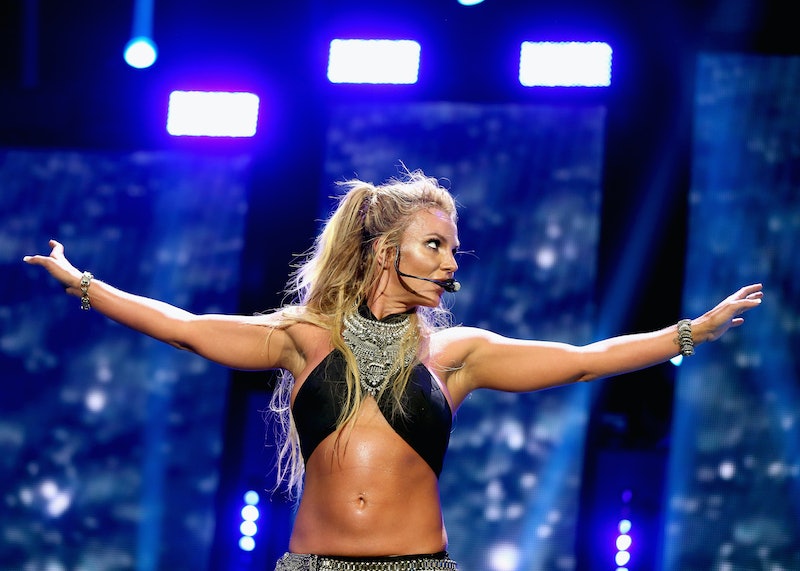 Oh, baby, baby how were we supposed to know Brit-Brit would become the inspiration for a Broadway show? Yes, a Britney Spears musical is officially happening and it's hopefully heading to Broadway next year. While the musical, Once Upon a One More Time — the title is a play on her classic "...Baby, One More Time" — will include a soundtrack of Spears' music, it won't focus on her life like some musician-focused musicals. Instead, the Britney Spears musical will be a show that should entice all those who wish their Disney princesses were a bit more feminist.

The jukebox musical looks to combine Cinderella and feminist writer Betty Friedan with a little help from Spears' discography, according to Spears' official website. "Cinderella, Snow White, and the other fairytale princesses gather for their book club," the official description for Once Upon a One More Time reads, "when – oh, baby baby! – a rogue fairy godmother drops The Feminine Mystique into their corseted laps, spurring a royal revelation."

The musical comedy, written by The Upside's Jon Hartmere and directed by Rock of Ages' Kristin Hanggi, will reportedly offer some revisionist history for these princesses, including Cinderella who is "having an existential crisis," according to Hartmere's comments to the New York Times. “These women have been in this hermetically sealed world, and then they start to get deeper into modern ideas — second and third-wave feminism," the writer explained. "And also explore how stories are passed down to us, and where we get our norms from. But it’s also super fun and funny.”

These princesses are not girls, not yet women looking for more than a fairytale ending. They're looking for a new lease on life. And what better soundtrack for that female empowerment journey than the Princess of Pop herself, Britney Spears?

According to the New York Times, the show will include "most" of her major hits, as well as “a couple of deep album cuts.” There's no official word on which songs from Spears will be included in the musical, but let's hope that Spears' 2001 track "Cinderella" will make the final cut. And let's be honest, if "Toxic" isn't in there in a scene referencing toxic masculinity, we'll be thoroughly disappointed.

Once Upon a One More Time begins its first previews in Chicago on Oct. 29, 2019, and the hope is that by the following year it will find a home on Broadway. There hasn't been any cast announcements, but let's assume Spears won't be playing any of these princesses.

Despite not playing an active role int he development and production of the musical, the pop star, who put her Las Vegas residency on "indefinite hiatus" to take care of her sick father, did release a statement via EW that makes for a very good endorsement of the show.

“I’m so excited to have a musical with my songs," Spears wrote, "especially one that takes place in such a magical world filled with characters that I grew up on, who I love and adore. This is a dream come true for me!” Not to mention a dream for her fans, who are so lucky that their favorite star is headed to Broadway.