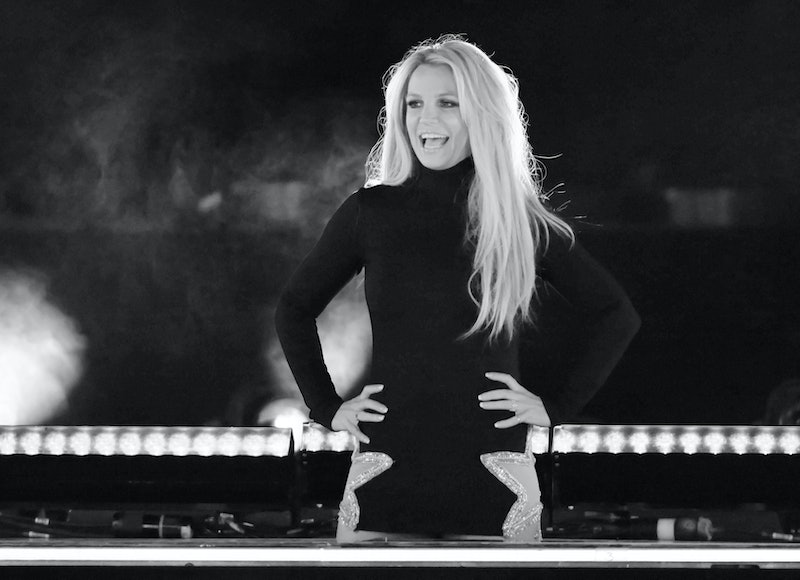 On Friday, Dec. 4, after revealing that her father, Jamie Spears, suffered a major health scare a few months ago, Britney Spears announced she is taking an "indefinite hiatus" from her Las Vegas residency, Domination, in a post shared to her official website. The singer also broke the news to fans in an emotional Instagram post. In her post, Spears revealed that she decided to put her "family first," and be there to support her father as he recovers after a recent hospitalization. She also wrote that fans who have already bought tickets to see her new Vegas show will be able to have their money refunded.

"I don’t even know where to start with this, because this is so tough for me to say. I will not be performing my new show Domination," Spears wrote alongside a childhood photo of herself and her parents. "I’ve been looking forward to this show and seeing all of you this year, so doing this breaks my heart. However, it’s important to always put your family first… and that’s the decision I had to make."

She continued: "A couple of months ago, my father was hospitalized and almost died. We’re all so grateful that he came out of it alive, but he still has a long road ahead of him. I had to make the difficult decision to put my full focus and energy on my family at this time. I hope you all can understand."

Spears concluded her message by thanking her fans for their "prayers and support for my family during this time."

Spears' indefinite hiatus will also likely affect any new music that the singer has been working on, most notably, the tease of a new album that she released back in November. Though she never confirmed that she was recording new music, Spears did post a cryptic tweet in the fall — which read, "You think you know me? Think again," — that led many fans to believe that she was teasing an upcoming project.

Back in June, Pitbull told radio station KTU 103.5 FM that he had been working on a new song with Spears and Marc Anthony, called "I Feel So Free With You." The rapper revealed that he and Spears became friendly when they both played shows in Las Vegas, and described his collaboration with the pop star as "volcanic." However, no release date for the track has been revealed since Pitbull's interview.

While Spears hasn't shared anything about new music recently, she did spend the months since her record-breaking Domination residency was announced sharing plenty of behind-the-scenes footage of herself in rehearsals for the show on Instagram. Considering that she often captioned the videos by sharing how "excited" she was to get back onstage and perform for her fans, it's clear that Spears' decision to take an indefinite hiatus was a very difficult one for her to make.

However, the singer has always made it clear to her fans and followers how important her family is to her, sharing plenty of sweet family photos of herself and her siblings on social media. And she hasn't been shy about sharing her close relationship with her parents, either, even telling The Daily Star in 2008, "my father saved my life. I probably wouldn’t be here if it wasn’t for him. I’ve not always been a good daughter, but he basically gave up his job and his life to look after me at a time when I wasn’t even sure I wanted to go on living. I owe him my life."

Hopefully Spears' father enjoys and quick and full recovery, and the family's bond will become even stronger from this scary situation.