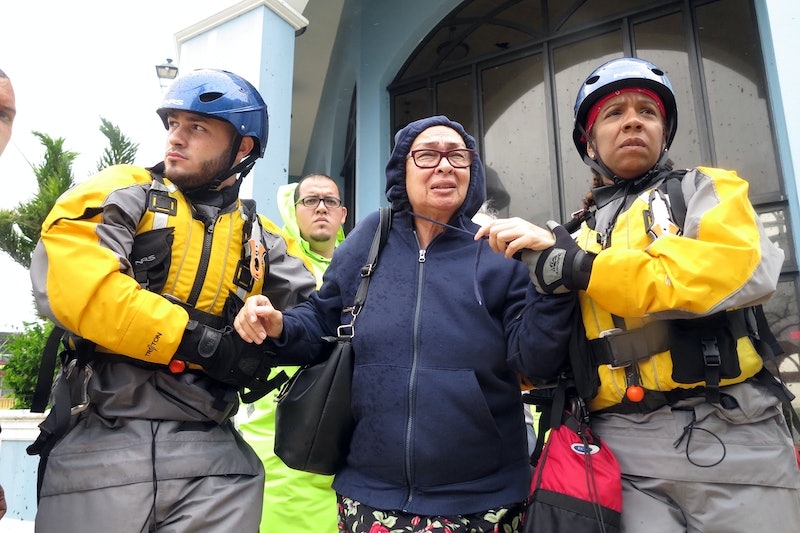 President Trump appears to be getting into a Saturday morning routine that, while perhaps cathartic for his most irresponsible impulses, has become exhausting and divisive for the rest of the country. In a series of tweets this particular Saturday, Trump's target was San Juan Mayor Carmen Yulín Cruz, whom he waged a nearly daylong attack on Twitter against. The backlash came in fast, but less noticed in the outrage over Trump's tweets about Puerto Rico was news about cholera and hepatitis outbreaks that are currently spreading throughout the island.

Hurricanes Irma and Maria have left Puerto Rico in a crisis. Almost the entire island is out of electricity, many areas have reported massive flooding (flood waters that are filled with sewage, bacteria, and chemicals), and about half of the population has no access to clean drinking water. These are optimal conditions for outbreaks on the island, and with many hospitals rendered useless without power or running low on supplies, the situation in Puerto Rico is incredible dire.

The potential for a devastating outbreak in Puerto Rico comes amid the administration's slow response to the growing crisis there. Rather than addressing criticism of the federal government by stepping up the urgency of recovery efforts, Trump instead took to criticizing San Juan's mayor in the morning, accusing her of "poor leadership" and saying that Puerto Ricans "want everything to be done for them." Later on Saturday, Trump tweeted "Despite the Fake News Media in conjunction with the Dems, an amazing job is being done in Puerto Rico."

The reality of the situation, however, says otherwise. There have been reported cases of widespread conjunctivitis, also known as pinkeye, and dengue, a mosquito-borne disease. The Washington Post also reported that in Hospital del Maestro in San Juan, many patients have come in with asthma, respiratory problems, and herpes. Dehydration is also a major concern.

Although Puerto Rico hasn't experienced a cholera epidemic since the 1850s, it's possible that the rivers on the island harbor strains of the bacteria behind the diarrheal disease, according to a 2008 paper that Wired referenced. Under the right conditions, the bacteria could lead to another cholera outbreak.

And the crisis in Puerto Rico right now certainly seems poised for it. Dr. Peter Hotez, the dean of the National School of Tropical Medicine at Baylor College of Medicine and director of Texas Children’s Hospital Center for Vaccine Development, wrote in an article last week that "Hurricanes Maria and Irma might indeed be those perfect storms."

Though talk about the first incidents of cholera being reported have been rife on Twitter on Saturday, no official reports have come from the authorities yet. Puerto Rico is currently struggling to keep up relief efforts as the devastation on the ground continues to worsen with each passing day.

On Friday, Cruz pleaded with the federal government to send more aid to Puerto Rico. "I am begging you. Begging anyone that can hear us to save us from dying," she said at a press conference. "If anybody out there is listening, we are dying, and you are killing us with the inefficiency."

Supplies and aid from both the government and charity organizations are trickling in to the island, but they have not come fast enough. Residents are crammed in shelters and medical aid is inaccessible in many parts. Yet Trump continues to tout the "amazing job" that the administration is doing in Puerto Rico, despite criticism of the insufficient response from the government to the desperate situation on the island.

Trump will likely continue his feud with Cruz. (A photograph of her wading chest-deep in sewage water to help rescue stranded residents has been making the rounds on Twitter as a response to Trump's insults.) But as is the common criticism about the president, many people, including those in Puerto Rico, are urging him to talk less and work more.