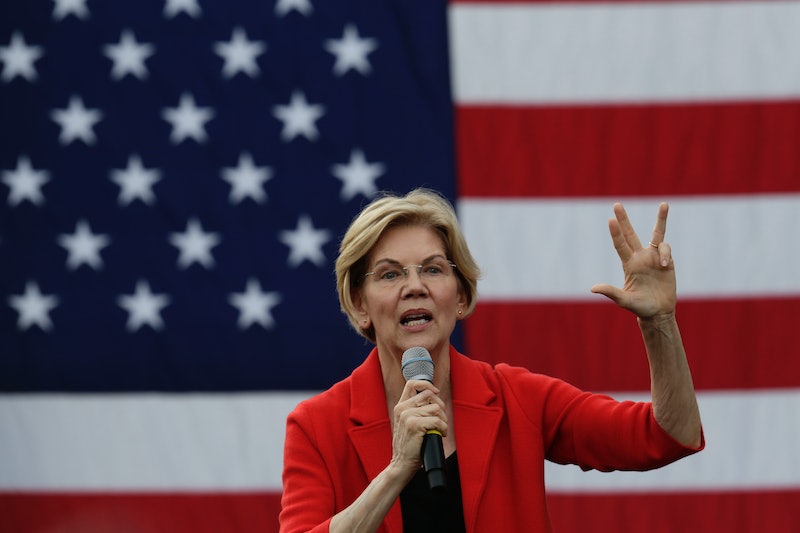 One Democratic presidential candidate seems to have a detailed policy proposal for just about everything — and there's seemingly more coming on something you'd never expect. A comedian asked Sen. Elizabeth Warren for help with her love life, probably as joke, and she just might get it. No word on whether there will be public points on Medium, though, or if the solution will remain between the two.

Ashley Nicole Black, a comedian and former writer for Full Frontal with Samantha Bee, tweeted the request on Saturday. "Do you think Elizabeth Warren has a plan to fix my love life?" she asked.

On Sunday, Warren's candidate account responded, "DM me and let's figure this out." Already the response has been liked 30,000 times. The message fits with one of her campaign's selling points to supporters, that Warren has a plan for everything. T-shirts being sold by the campaign read, "Warren has a plan for that," and the issues section of her website reads more like an encyclopedia than the typical collection of bullet points.

Plans for tackling student loan debt, ending drilling on public lands, and taxing the wealthy have all garnered the Massachussets Democrat headlines in national press, setting her apart — at least in terms of policy specifics — from other candidates. Her typical announcement also comes in the form of a long-form media post with her byline on it; often there's a video released at the same time for social media.

Quote tweeting Warren, Black acknowledged the response, to put it lightly. "We stan a Queen. Nay, a PRESIDENT," she wrote in her first tweet. "I am deceased. And ready to welcome new love in my life. And then get our new pres elected," she added in another tweet with the hashtag #shehasaplan and a photo of the exchange.

Warren's latest plan, on abortion, graced Black's timeline earlier in the week. Warren laid out ways to protect abortion access in response to the recent spate of abortion bans in Republican-controlled states. The most recent, in Alabama, does not include exceptions even for cases of incest or rape. According to BuzzFeed News, supporters of the bills reportedly all have the same goal in mind, to challenge Roe v. Wade, the Supreme Court decision that legalized abortion across the country in 1973.

"Congress should pass new federal laws that protect access to reproductive care from right-wing ideologues in the states," Warren wrote in her Medium piece. "Federal laws that ensure real access to birth control and abortion care for all women. Federal laws that will stand no matter what the Supreme Court does."

As Warren explains in her piece, federal law preempts state law and would therefore invalidate the legislation recently passed, without any court injunction. Warren wrote that laws should be written that prohibit states from prevent medical providers from providing care and patients from accessing abortions.

"When I was growing up, long before Roe, people still got abortions," Warren wrote. "Some were lucky. Others weren’t. They all went through hell."

Given Black's tweets about abortion in recent days — and the fact that she shared it — this might have been her favorite policy paper. Until Warren's response, that is.