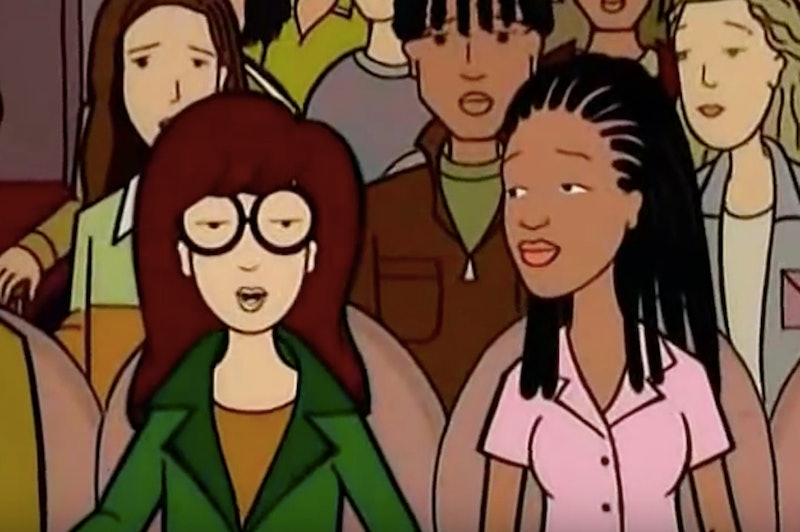 '90s kids and '90s kids at heart, here's some exciting news for you: a Daria reboot is in the works at MTV. On June 21, Viacom announced the launch of MTV Studios, which promises brand-new series and "new iterations" of MTV favorites like Daria, The Real World, and Aeon Flux (yes, the one they made into a movie with Charlize Theron). The reimagined Daria series will be titled Daria & Jodie, centralizing on sardonic feminist icon Daria Morgandorffer and her friend Jodie Landon, who appeared on the original run of the show. While Daria's ride or die was traditionally Jane Lane, it's important that they're re-centering the series to feature Jodie, one of the series' few female characters of color. Jane, like Daria, is presumably white.

As exciting as the news of a Daria revival is to fans, it begs the question: Who is the reboot for? Fans of the show's original run are now in their late 20s and 30s, which is not the hip, teenage demographic MTV purports to have on lock. It's not like Daria is some kind of relic — her cynicism, wit, and heart are universal — but the reality is, times have changed since the show premiered. They just have. Generation Z has just as much right to be as angsty, disenchanted, and over high school as millennials did, but they're still the next generation. Daria tackled race, identity, popularity, anxiety, body image, and more during its initial run. Not bad for a spinoff of Beavis and Butthead, but MTV will need to take it even further for the remake to really count.

The case for "needing" revivals of any show is its own argument, but Daria raises something in particular. She's intelligent, jaded, and deadpan, which felt revolutionary to watch in the '90s. Today, it's almost its own genre of comedy. The concept no longer feels as original or as fresh. Obviously, there are ways to update it for the times without obliterating what it used to be — just imagine Daria talking about Twitter to Quinn or Brittany — but why revive an old series, when you can make a new one? Furthermore, the ironic, self-aware, "too cool to care" attitude isn't exactly en vogue anymore. It's 2018 and the teens are embracing their feelings — enthusiasm and passion are cool. That said, there is still a place for Daria in 2018.

Daria might feature a blasé attitude specific to the '90s, but it also broke ground when it comes to black women on screen in a way that is still desperately needed. In an essay for Vulture, comedian and Daria superfan Phoebe Robinson explored what Jodie's character meant to her. Jodie was pretty, popular, and consistently well-rounded, unlike the majority of the air-headed popular squad. But Jodie's identity crises were written directly into the show. Jodie struggled with being one of the only black students at her high school, and spoke openly about feeling tokenized in various ways. (She and her jock boyfriend Mack, who also happened to be black, were consistently elected Homecoming King and Queen, for instance.) Though the series was called Daria, and not Jodie, it allowed for a black female character to have a place on the series that wasn't just a supportive caricature. So if they're making her a leading role in the reboot, as the new title suggests, it could be just the thing to bring Daria into the new millennium.

The new Daria reboot will obviously have to change for the times, but there are some things that fans will demand remain the same. The characters in Daria were famous and beloved for being deadpan, wry, and a little self-defeating, and the cool kids were mostly annoying — except for kind, positive Jodie. Daria's parents loved her and accepted her for the champion of the unenthused that she was, and fans still stan a blunt, blasé icon. Without these vibes of ennui, the show wouldn't be Daria at all.

If the new series follows through on being Daria & Jodie, then it will make Jodie's groundbreaking storylines all the more vital while keeping Daria's signature deadpan on point. And there should also be lots of pizza, too.

More like this
The OG Power Rangers Are Returning For A Spandex-Clad Special
By El Hunt
Here’s Why Danny Masterson’s Hyde Isn’t In 'That '90s Show'
By Brad Witter
The 'Teen Wolf' Creator Revealed If 'Wolf Pack' Takes Place In The Same Universe
By Grace Wehniainen
The 'Gossip Girl' Reboot Creator Is “Looking For A New Home” To Air A Potential Season 3
By Brad Witter
Get Even More From Bustle — Sign Up For The Newsletter
From hair trends to relationship advice, our daily newsletter has everything you need to sound like a person who’s on TikTok, even if you aren’t.