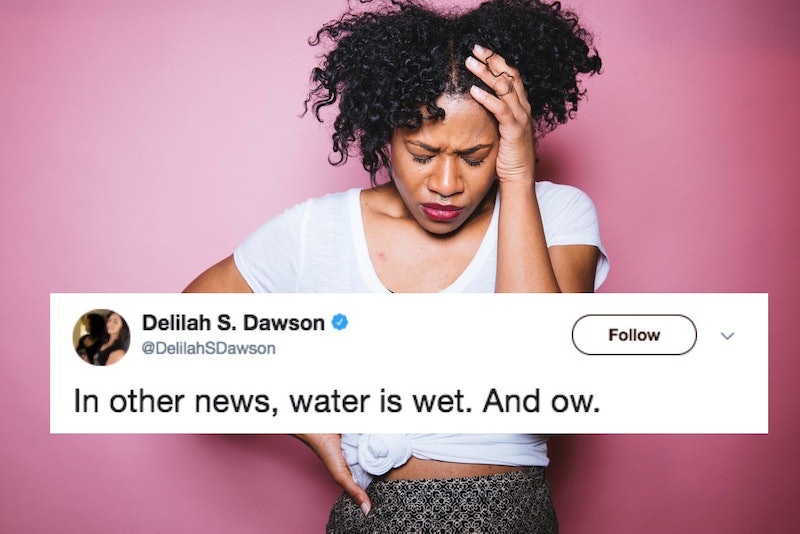 Anyone who has ever suffered through intense menstrual pain can tell you that it’s no laughing matter — and yet, period-havers across the globe have continually dealt with being told that their cramps are not actually that bad or all in their heads (usually by cisgender men who have never menstruated themselves). As such, it’s perhaps unsurprising that the Twitter reactions to a doctor saying that some of his patients have described their period pain as being heart attack-like have been fierce. The statement confirmed what so many menstruating people have known for so long: Yes, it can be that bad; no, we are not making it up; and good gravy, why have you spent so long not believing us when we told you how bad it can get?

The current outpouring of commentary on social media was prompted by a piece that appeared on Marie Claire’s website on Feb. 27, but which was originally published on Elle UK. The piece highlighted a quote from one doctor that was presented in a piece published at Quartz in 2016 examining the research surrounding severe menstrual cramps and other period-related pain — or, more rather, examining the lack of research surrounding these very real issues.

And make no mistake: They are real issues. “Dysmenorrhea, the clinical term for painful menstruation, interferes with the daily life of around one in five women, according to the American Academy of Family Physicians,” writer Olivia Goldhill pointed out in her piece for Quartz. But according to experts Goldhill spoke to, there’s “remarkably little research into the condition” — and, perhaps worse, “too many doctors are dismissive when presented with the symptoms.”

One of the experts Goldhill consulted was John Guillebaud, Emeritus Professor of Family Planning and Reproductive Health at University College London — and it’s a quote from Guillebaud that forms the crux of the Elle UK/Marie Claire piece: He told Goldhill that some of his patients have described to him the severe pain they experience during menstruation as “almost as bad as having a heart attack.” The piece that Elle UK writer George Driver penned this week picked up that two-year-old quote and launched it back into the spotlight via Marie Claire’s Twitter account — and now that it’s there, period-havers all over the internet are not hesitating to voice their thoughts on the matter.

Mostly — and justifiably — those thoughts amount to, “WE TOLD YOU SO.”

It’s worth remembering that one sound byte does not a study make; however, dysmenorrhea is no joke. The causes might vary — and, indeed, we actually don’t know all the possible causes — but it's often due to serious conditions like polycystic ovarian syndrome (PCOS) and endometriosis. What’s more, it’s also been well-documented that women’s pain is frequently taken less seriously by doctors than men’s pain is. And while a) cisgender women are not the only ones who menstruate, and b) not all women menstruate, our cis-normative culture tends to look at menstruation solely as a “women’s issue,” which goes some way towards explaining why menstrual pain has so frequently been ignored, downplayed, and outright denied throughout… well, pretty much the entirety of human history.

Indeed, the fact that we still don’t really know what causes period pain in the first place is due at least in part to systemic sexism. Because women’s pain is taken less seriously than men’s, because women are so frequently told that period pain is “all in their heads,” and because medicine has been male-dominated for so long, researchers attempting to study menstrual pain can encounter difficulty securing funding. Take Kathleen Lustyk of the University of Washington, for example; she told ResearchGate in 2016 that some of her grant reviews have been rejected because the reviewers didn’t believe PMS is an actual thing. According to Lustyk, the reviewers told her PMS is “merely a product of our society or culture that has painted a natural process in a negative light and that, given its monthly predictability, leads to suffering through anticipation.” Said Lustyk, “I suspect that this is a fancy way of saying it’s really just in a woman’s head.”

It’s true that the cis-male-dominated nature of medicine is changing, particularly with regards to gynecology; according to a study from 2015 that broke down the demographics of doctors in particular specialties by gender, gynecology is now made up of 85 percent women — but in this case, I think it’s worth highlighting an observation Brandi Ring, MD told the American Medical Association’s online publication AMA Wire in response to the study: “In medicine, specialties swing from one extreme to the next,” said Ring. “Years ago, gynecology was dominated by men but today, it’s just the opposite.” And we’re still seeing the effects of all those years of cis-male-dominated gynecology: Years, decades, and even centuries of experts brushing off period pain has made the idea that it doesn’t matter, or that it’s not as bad as we think, deeply ingrained in both the field specifically and our culture at large — even when, for all those years, decades, and centuries, people with periods have continually been saying, “No, seriously, it is that bad.”

So, y’know, it’s understandable that so many period-havers have responded to the Elle UK piece as they have.

Many Responded With What Basically Amounts To, “No Duh”:

While Others Pointed Out The Issue With The Mode Of Delivery Of This Particular Message:

I mean, don’t get me wrong — cis male allies are nice for period-havers to have. But, well… there’s something kind of off-putting about an issue affecting us not being taken seriously until a cisgender man points out that it’s a problem. It really speaks to one of the biggest issues with our culture at large — its unwillingness to listen to oppressed groups when they tell them what their experiences have been, coupled with its willingness to listen to privileged people when they say the exact same thing.

Many Used The Opportunity To Clap Back At Those Who Have Told Them “It’s Not So Bad” Before:

Some Detailed How Our Culture’s Attitude Toward Period Pain Has Affected Them In Bigger Ways:

And Some Made This Related Point:

A point which, I believe, is very much worth considering…

…But then I remember that this is the world we actually live in and sigh deeply.

Many Reminded Us About This Aspect Of The Issue:

While Others Pointed Out Some Of The Larger Implications Of The Whole Thing:

People who menstruate are not getting the diagnoses or treatment they need for other conditions because of our culture's unwillingness to acknowledge that period pain is real. That is so very much not OK. And it needs to change.

You know what might help that change along? Donating time, money, or skills to organizations that fight for reproductive health. And, if you're a health care provider: Listening to your patients. Don't just brush off our concerns. Listen when we tell you what we're experiencing.

Listening can go a long way towards helping.

More like this
An Honest Review Of The TikTok-Famous WalkingPad
By Kaitlyn Wylde
What Does “Gatekeeping” Mean On TikTok? The Viral Term, Explained.
By Courtney Young
TikToker Kate Glavan Has The Antidote To The “Hot Girl Walk”
By Alexis Morillo
What Is “Night Luxe?” Breaking Down TikTok’s New Aesthetic
By Courtney Young
Get Even More From Bustle — Sign Up For The Newsletter