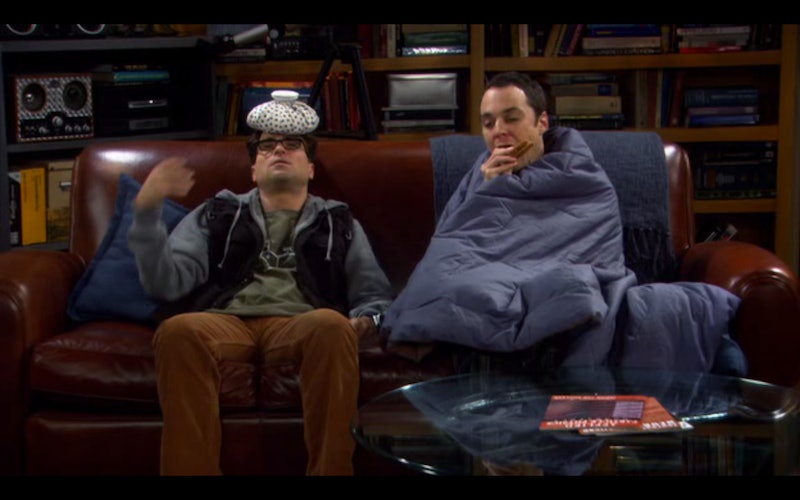 It’s a term that begins to pop up with some regularity at about this time every year: “Man flu.” What is it? Is it as goofy as it sounds? Is "man flu" even real? Well, according to one doctor, “man flu” might actually be a legit thing. In a piece for the British Medical Journal, Dr. Kyle Sue of the University of Newfoundland recently took a look at the existing researching of how influenza symptoms affect men and women — and there might be more to the issue than many probably think.

As Sue points out, “man flu” is such a ubiquitous term thatit’s even made its way into the Oxford Dictionaries — there, it’s defined as, “A cold or similar minor ailment as experienced by a man who is regarded as exaggerating the severity of the symptoms.” The research in recent years has gone back and forth on how legitimate claims of “man flu” really are — sometimes, it’s found to be real, while other times, it’s not — which has left the whole issue as something of an open question.

So, in order to figure out whether it’s “appropriately defined or just an ingrained pejorative term with no scientific basis,” Sue combed a variety of research databases for studies using combinations of and variations on the terms “man”/“male,” “woman”/”female,” “gender”/“sex,”“influenza”/“flu,” “viral,” “respiratory,” “common cold,” “difference,”“comparison,” and “intensive care.” After narrowing the list of articles down by relevance, he found that overall, the research does suggest that “man flu” is an actual thing.

(Side note: Bonus points to whoever made this GIF, which is probably the most hilarious use of The Last Of Us I've ever seen.)

According to Sue's analysis, a lot of the information we have comes from studies that used mice as the subjects, rather than humans; however, these studies found that female mice tend to have higher immune responses than male mice do, which means that sex-dependent hormones might be at play. When it comes to research conducted with actual humans, it turns out that men in the U.S. have higher rates of influenza mortality than women of the same age do; what’s more, some studies have found that women might respond better to the influenza vaccine than men.

Sue is careful to note that his findings show that “the concept of man flu, as commonly defined, is potentially unjust” — emphasis mine — and not that, “man flu is absolutely real.” As always, correlation is not causation, and more research is needed; as Sue told the Guardian, “There need to be more studies, higher quality studies that control for other factors between men and women before we can definitely say that this difference in immunity exists. Is it that women are more resilient,that they are able to juggle more when they are ill, or is it that they don’t have as severe symptoms? That we are not too sure about.” It is worth noting, however, that men might actually have weaker immune responses to viral respiratory viruses like the flu — so the idea that they’re making their illness sound worse than it really is might not actually be the case.

But I won't lie: Part of me is sitting here reading about all of this and going, “SO. HOW DOES IT FEEL TO HAVE TO JUSTIFY YOUR PAIN, MENFOLK?BECAUSE GUESS WHAT: THAT IS EXACTLY WHAT IT IS LIKE TO TRY TO GET MEDICAL TREATMENT AS A WOMAN."

Medicine has a long history of taking men’s symptoms seriously while brushing aside women’s as “not that bad” or “all in your head.” It’s one of the reasons that we don’t know more about what causes period cramps, for example — the research needed to get to the bottom of menstrual pain just hasn’t been done because it’s so often chalked up to being “all in your head.” But ignoring menstrual pain isn’t the only way in which medicine fail women — according to CNN, more than 40 percent of women with autoimmune diseases report having been told by doctors time and time again that nothing is actually wrong with them before their symptoms were actually taken seriously enough to get a diagnosis. And researched published just last year found that women and men with the same symptoms of abdominal pain wait vastly different times before finally being treated: For men, it’s 49 minutes; for women, it’s 65. And hey, guess why thatis? It’s because women are thought to be “exaggerating pain and being ‘dramatic’ due to sexist stereotypes,” as the Independent put it.

Knowing all this, then, you’ll forgive me if I can’t help but see some, uh, irony in the debate about “man flu.”

At the same time, I also realize that the term “man flu” used in the pejorative sense is yet another example of the way sexism hurts everybody, regardless of gender. It paints men who suffer from illness as “weak” and therefore “feminine,” which both devalues femininity and reinforces toxic masculinity. Note the similarities between how “man flu” is defined and the reason women’s abdominal pain is treated less seriously: In both cases, it’s because the patient is assumed to be exaggerating their symptoms in the name of “drama.” Indeed, as Randall Horton observed in the Huffington Post earlier this year, “The term ‘man flu’ may just be another way of saying someone failed the test of the patriarchy to fulfill the demands of sacrificial masculinity.” And that’s no good, either.

The bottom line is that everyone deserves to have their symptoms taken seriously, regardless of gender, race, orientation, identity, etc.— and the way we deal with “man flu” is part of that. So, uh… how about we stop assuming that when someone feels sick, they’re making it seem like it’s worse than it actually is? Just, y’know, generally? We’d probably end up with a healthier society overall in that case — both literally and figuratively.