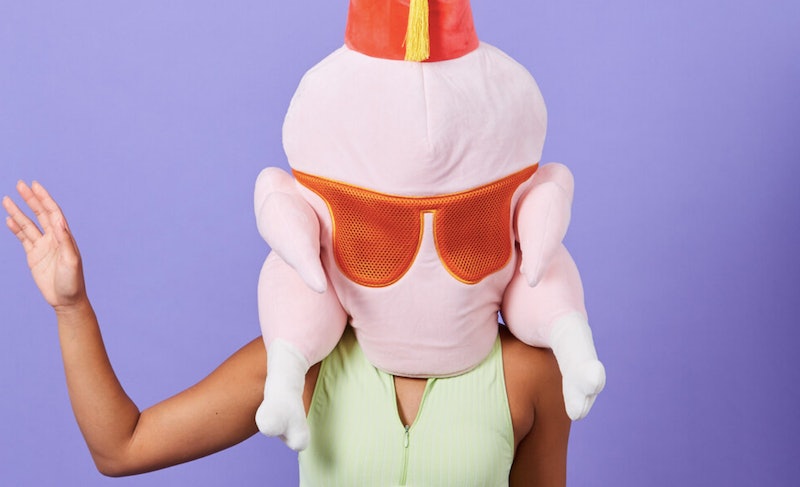 Just in case you were under the illusion that we'd made all the possible Friends merchandise that there is left to make and your wallet is safe from their siren song, I have some difficult news. It turns out there is one thing left for super fans to spend their dollars on, and it's this giant Friends turkey mask from Firebox. All those Thanksgivings you spent trying recreate Rachel's iconic trifle and serve it to your friends were leading up to this — the Thanksgiving you join the table cosplaying as Monica with a giant turkey on her head.

The mask, which retails for $37.99, is an homage to that iconic scene in Friends, in which Monica apologizes for inadvertently being at fault for Chandler once losing a toe by trying to make him laugh. She ends up shoving the sunglass-clad, fez-rocking turkey on her head, which prompts Chandler to accidentally tell her he loves her for the first time (and also terrifies poor unwitting Joey, who not only does not share food, but clearly does not want it regaining sentience on Thanksgiving Day).

While there's no guarantee that this mask will elicit a similar love confession, it will be just the kind of conversation piece at the dinner table to distract from your family's opposing political views or the fact that while you didn't have time to make a more concrete ten-year plan for yourself, you did have the time to marathon all of Schitt's Creek on Netflix this year.

The Firebox description suggests also using it as a handy means of cheering someone up. "Pop it on your head and shimmy on over to their apartment," it reads. "The fez and sunglasses are attached so you don’t have to worry about putting them on separately and the turkey itself is made of fabric instead of… meat. Much cleaner than putting a real turkey on your head."

Now you can save the actual turkey for eating, and this one for making golden content for all your cousins' Instagram stories.

If you're still feeling the Friends vibe this Thanksgiving and want to lean into it harder than Joey leans into a sandwich, you have plenty of other options at your disposal. There is, of course, the simplest and most effective plan, which is to marathon all of the Friends Thanksgiving episodes in order — a thing that is decidedly easier to do, since that they're all on Netflix (at least, they are for now — whomp). You can also go about recreating Rachel's trifle, the glorious, Frankensteinian dessert/meal hybrid of your nightmares and Joey's dreams that included meat, custard, peas, and — you know what? We don't need to get into it. (If it makes you feel any better, LeBlanc later revealed that the concoction the actors actually ate on set was whipped cream and bananas, a combo we can all get behind.)

However you choose to celebrate Thanksgiving this year, don't forget to wear your giant turkey mask — if only they'd thought to put in a hole for your mouth to shove the actual turkey in! Ah, well. If you're actually serving the trifle, it may be for the best.