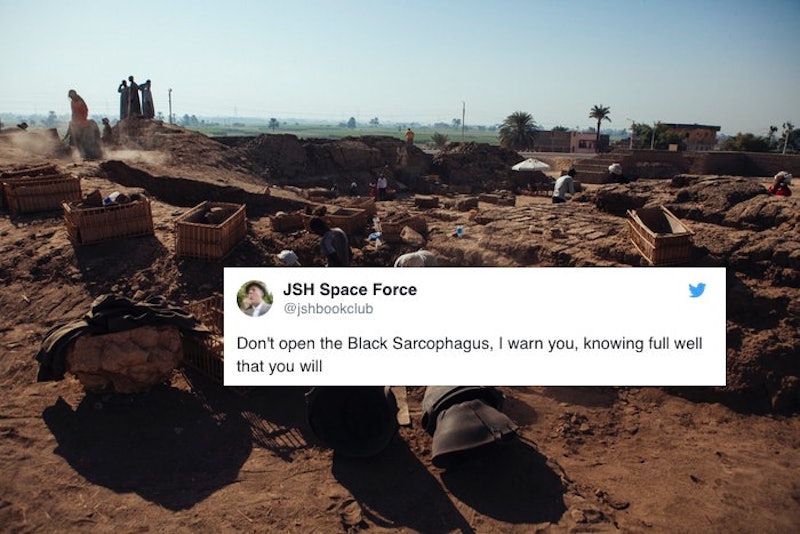 Today, we have incontrovertible proof that we still haven’t unlocked all of the mysteries of the world: A mysterious black sarcophagus was just discovered in Egypt — and no one knows what to do with it. We don’t know who’s inside. We don’t know what’s inside. We don’t even know if we should open it (although in all honesty, one would hope that we’ve learned one very important lesson from every single mummy movie ever made: Never, ever open the giant, mysterious sarcophagus you just found in Egypt). The whole thing is both stumping and fascinating people across the world, whether they’re into archaeology or not — and, I mean, it’s not hard to see why. It’s the ancient version of “WHAT’S IN THE BOX???”, so of course we’re riveted by the story.

The tomb from which the sarcophagus was extracted is located in Alexandria. (Yes, home of the Great Library — the big, important one that was regretfully destroyed, likely during the Siege of Alexandria around 47 or 48 BC.) According to the Egyptian Ministry of Antiquities, the tomb, which dates back to the Ptolemaic era, was unearthed during an excavation being carried out prior to the digging of the foundations for a new building planned at Al-Karmili Street in Alexandria’s Sidi Gaber district. As Science Alert notes, the size of the sarcophagus is significant; it’s more than six feet tall, nearly nine feet long, and about five and a half feet wide, making it the largest sarcophagus ever found in Alexandria.

Even more astonishing than that, though, is the fact that the sarcophagus has apparently not been opened since it was first sealed. We know this by the layer of mortar that sits between the lid and the sarcophagus’ body. That means that whatever is inside has been there for between 2,048 and 2,341 years.

Which, of course, brings us to the question on everyone's mind: What is inside? Well, I mean… it’s probably a long-dead, likely mummified human. That’s, y’know, generally what you expect to find inside a sarcophagus; they are stone coffins meant to hold the mummified remains, after all. What we’re less certain of is who might be inside, although it’s thought that a large sculpture of a head made of alabaster that was found inside the same tomb might depict whoever is inside the sarcophagus. The identity of the head has not been determined yet, though, so there are still a lot of questions that remain unanswered.

But while we’ve all been sitting here, hemming and hawing about whether we should open up the sarcophagus, Twitter has been having a field day with the discovery. The reactions to the news are priceless, so let’s take a look at what people are saying, shall we?