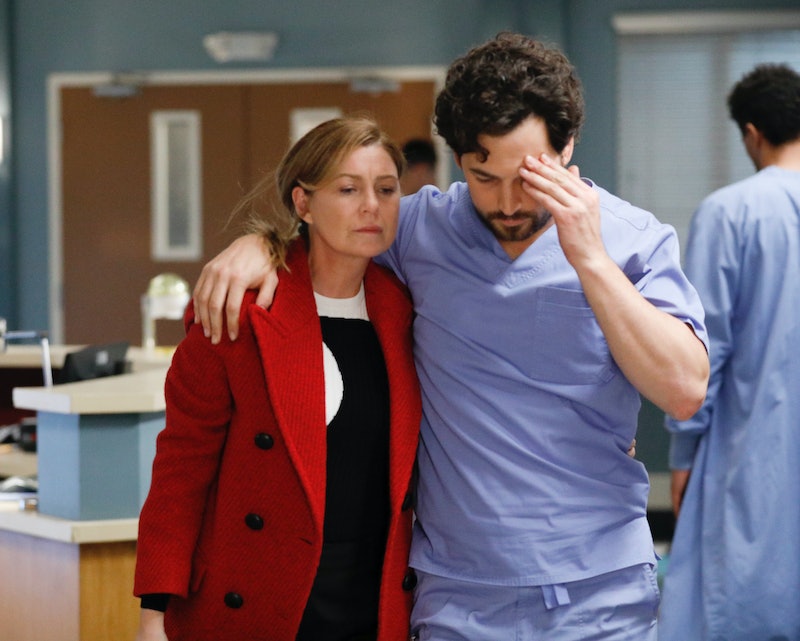 Watching beloved characters die is an inevitable part of being a Grey's Anatomy fan. For better or for worse, this drama prides itself on making us weep uncontrollably. And while some may have been disappointed that the coronavirus outbreak cut the season short, the halt in production may have been a blessing in disguise. According to TVLine, sources claim that someone was supposed to die in the original Grey's Anatomy finale, but the idea ultimately got scrapped — at least for now — once the series was forced to end Season 16 early.

An insider alleged that one of the four episodes to get tossed as a result of the global pandemic was going to center around a big explosion that would've claimed the life of this unknown major character. It's unclear at this time which character was supposed to meet a tragic fate and series showrunner Krista Vernoff refused to confirm or deny the report during a recent interview with the outlet. That means, as of now, this is all just circumstantial at best, though it wouldn't be all that surprising for Grey's to want to leave us with a heartbreaking finale. But that still begs the question — has this mystery person been saved for good or will the writers still kill him or her off when the show returns for Season 17?

"I have not formulated that plan yet," Vernoff told Deadline when asked if she planned to carry over any unresolved storylines from the last four episodes to next season. "In about four weeks, I’m going to get in a room with the writers, and we’re going to talk about all of it." However, Vernoff was also quick to add that she has a sneaking suspicion that a few adjustments will be made. "I have a feeling that their stories are going to change some, from what we had planned, and that we’ll repurpose some of what we had written and use it in the early episodes of Season 17," she stated.

Whether or not this rumored character death will be one of those changes remains to be seen. That being said, if you're desperate to find a few clues on the matter, Station 19 could be the key. Unlike Grey's, the spinoff series was able to complete production on the rest of its season before the COVID-19 outbreak. And considering how closely intertwined the two shows are, fans may be able to glean a few clues about the would-be explosion since it would also presumably impact the Station 19 characters. (They are firefighters, after all, and explosions tend to include some fire.)

“Ironically, when fans watch Episode 15 and 16 of Station 19, they will probably have a feeling of some of what we had planned for [the original Grey’s finale],” Vernoff told TVLine in a separate interview, while also admitting that she tried to edit at least part of the Grey's content out of Station 19 to help avoid spoilers.

Richard is officially out of the woods now that his defective cobalt hip has been removed, so that seems to rule him out. However, DeLuca remains a bit of a wild card and his erratic behavior could easily result in him putting himself in mortal danger during an explosion. Frostbite didn't stop him, so why would a little fire?

Then again, Amelia and Link are looking a little too happy these days, which could signify their impending doom down the line. But honestly, it could be anyone's head on the chopping block, but we'll have to wait until Season 17 to find out one way or the other.