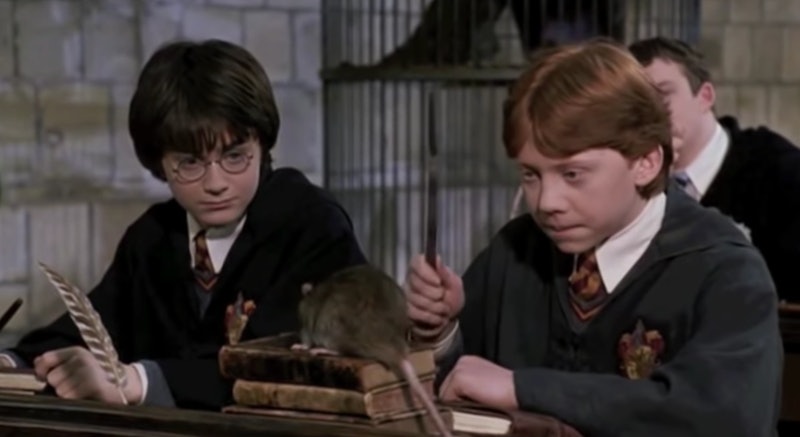 I'm sure that, like me, (unless you're a true witch or wizard) you're still reeling from the fact your Hogwarts acceptance letter never arrived. I don't care how many years have passed since my 11th birthday, I'm still not over it, and I'm still kinda holding out hope that owl will eventually arrive. But what if I told you, that short of actually heading to the School of Witchcraft and Wizardry you can still study magic? That's right. A Harry Potter law course has been introduced at a university in India and excuse me while I sign right up.

The BBC reports that Kolkata’s National University of Juridical Sciences is offering the course, which is titled "An interface between Fantasy Fiction Literature and Law: Special focus on Rowling's Potterverse," to help students apply existing laws to unexpected situations. Classes will cover legal and ethical aspects of the Harry Potter books including the Wizengamot trials, Sirius Black's wrongful imprisonment, the enslavement of house elves, and even Quidditch rules. (Sports law apparently, who knew?!)

Despite being due to start in December, the course has unsurprisingly already filled all 40 of its spots. Bad news if you were thinking of requesting a transfer from your UK uni to India. Impromptu magical year abroad anyone? There's always next year, I suppose.

The magician, sorry man, behind the course, Professor Shouvik Kumar Guha told the BBC that he hoped the classes would help students be more "creative" in their approach to the law. I like your style Mr. Guha.

"In our current system, we simply tell students the black letter of law," he said. "Will they be able to apply pre-existing laws to situations that have never come up before? You can also see so many examples of how media is subverted by political institutions in the Potter books and see parallels in the real world."

For sure, Harry Potter taught me a lot about right and wrong. For one it's very important not to steal your parents' flying car, not to eat your friend's chocolates because they might be spiked with love potion, and not to disrespect Hippogriffs. Not to mention that the ultimate hangover cure is switching on the telly of a Sunday afternoon only to find ITV has put one of the Harry Potter films on. Lessons that have stood me in good stead for my life as a muggle. Although I'm pretty sure they won't be making an appearance on Professor Guha's syllabus.

It's not the first university to offer a course inspired by the wizarding world of Haz Poz. Potterheads can also use their knowledge at universities like Durham university in the UK, at Yale and Georgetown in the U.S, and according to the BBC, Kolkata University is the second Indian law school to offer a HP law course. Honestly, I think British law schools could learn a lesson or two. I mean granted, the law is pretty serious stuff, but a creative approach to teaching is sure to lighten any budding lawyer's load. Now if only they could do the same thing for maths...

More like this
Deliveroo Is Selling Lotus Biscoff Cinnabons Now
By Darshita Goyal
The Queen’s Cause Of Death May Not Be Formally Announced
By Shahed Ezaydi and Catharina Cheung
Will Archie & Lilibet Attend The Queen's Funeral?
By Sam Ramsden
How To Shop Your Favourite Celebrities’ Closets On Depop
By Darshita Goyal
Get The Very Best Of Bustle/UK