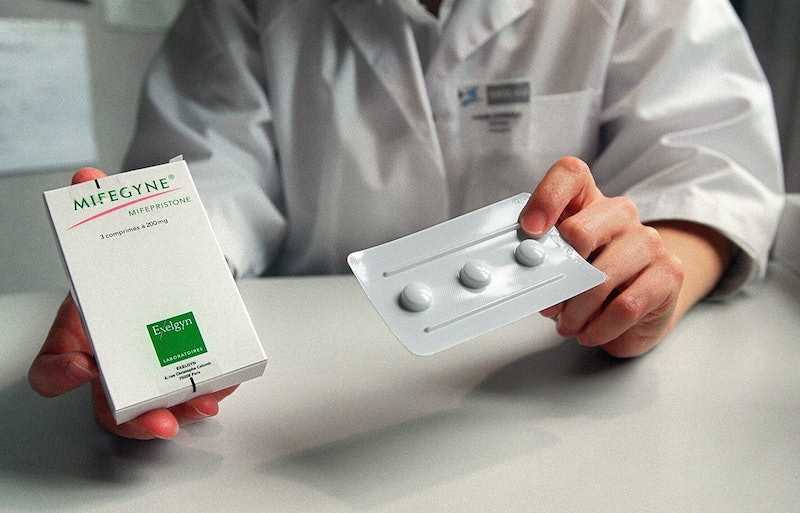 What would you do if you needed an abortion and you lived in place where there were no abortion clinics? That’s a real-life question faced by women living in countries where abortion still isn’t legal — but it’s also faced by American women, even today. Dr. Graham Chelius, a doctor on the island of Kauai in Hawaii, knows exactly the level of hardship women face when they don’t have access to an abortion clinic. That’s because there isn’t one on his island. And he, along with the ACLU, is suing to make the abortion pill available in pharmacies.

The abortion pill was used in for 43 percent of abortions in Planned Parenthood clinics in 2014, a number that Reuters reports has most likely gone up in the last three years. It can be used to terminate a pregnancy up to 10 weeks. It’s also safe — safer than a lot of over-the-counter drugs, including Tylenol. In the first 18 months after it was approved in the United States, 80,000 women used it to terminate a pregnancy, according to the association of Reproductive Health Professionals. The same report found that of those women, only 139 — or 0.17 percent — “experienced an adverse effect.” Even more striking, in the first eight years, 850,000 women used the abortion pill to terminate a pregnancy and seven women died. However, there was no causal relationship found between their deaths and the abortion pill. In comparison, in the seven years between 1993 and 2000, the FDA received more than 4,000 reports of adverse effects — including 55 deaths — from Claritin.

Julia Kaye, a staff attorney with ACLU's Reproductive Freedom Project, told NPR that many women prefer the abortion pill to a surgical abortion because it “feels more natural to them, like a miscarriage.” Women can take the pill in the comfort of their own home, surrounded by loved ones if they choose. They don’t have to undergo a surgical procedure, which can feel scary and daunting.

“The abortion pill is safe, effective, and legal. So why is the FDA keeping it locked away from women who need it?” Kaye said in a press release about the lawsuit. “The FDA’s unique restrictions on medication abortion are not grounded in science — this is just abortion stigma made law.”

Currently, the abortion pill has to be administered by a doctor, in a medical facility. However, the woman doesn’t even take the pill at the doctor’s office — she takes it at home. Or, you know, not in the presence of a medical provider. Dr. Chelius' lawsuit says that the rules stating that abortion pill has to be administered by a medical professional who has the pill in stock, is able to perform a surgical abortion in case of complications, and that providers have to be pre-registered with the drug manufacturer are placing an “undue burden” on women who want to access abortion services. The “undue burden” requirement comes from the landmark 2016 cases Whole Woman’s Health v. Hellerstedt, which found that restrictions on abortion clinics in Texas made it nearly impossible for women to access safe and legal abortion in parts of that state.

For Dr. Chelius, the undue burden comes from the fact that there are people in his practice who have objections to abortion and refuse to sign off on the abortion pill. As a result, women who are seeking abortion services have to take a 300 mile round trip to another Hawaiian island. For many women on Kauai, the cost and travel time are prohibitive, making it impossible for them to get an abortion.

“I believe it’s my moral obligation to provide my patients with the care they need — whether that’s maternity care or abortion,” said Dr. Chelius in the press release. “Unfortunately, because of the FDA’s restrictions, my patients are forced either to fly to a different provider on another island — resulting in serious delays — or to carry a pregnancy to term against their will.”

No woman should ever be forced to carry a pregnancy to term against her will. Women are no safer when a medical professional hands them a (scientifically proven to be safe) pill to take at home than they are when a pharmacist hands them that same pill. Here’s to hoping Dr. Chelius’ lawsuit is successful and women in Kauai — and across the United States — can access their right to safe and legal abortion.