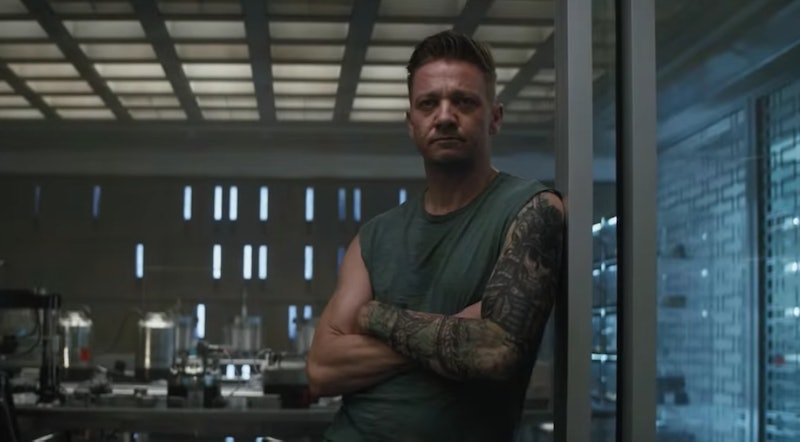 It only took nearly a decade, but it appears this OG Avenger is finally getting some respect. A Hawkeye limited TV series is reportedly in the works for Disney's new streaming service, according to Variety. And if this series does happen, it won't just include Jeremy Renner, but a very interesting girl power twist. (Bustle reached out to Disney, Marvel, and Renner's representative for comment about the series, but has not yet received a response.)

On Wednesday (April 10), Variety reported that Renner is in talks to star in a Hawkeye limited series for Disney+. But, he won't be going it alone. This possibly eight episode series will reportedly take a closer look at Hawkeye's relationship with Kate Bishop, his female protégée who he might be ready to pass his bow and arrow to.

But, like, really, who is Kate Bishop? Well, according to Entertainment Weekly, she's a big deal in the comics, where she made her debut in 2005'sYoung Avengers #1. In this series, she meets up with teens who also happen to have the skills of the Avengers. Like Hawkeye, she doesn't have any superpowers, but she's great with a bow and arrow. She and Clint ended up sharing the name Hawkeye, and now, the two might share the small screen in a series that could tell her story. Kate ended up getting her own solo Hawkeye comic series in 2016.

EW thinks fans will first meet Kate in Avengers: Endgame, though, based on the movie's trailer. While it was hard to ignore a newly mohawked Hawkeye and Black Widow's reunion in the official trailer, it's possible fans might have missed the clues that Kate Bishop will be in Endgame. Well, less of a clue, and a sign since Hawkeye is seen training a young brunette that is too old to be his daughter. This teen might be the right fit for the Avengers, especially if Hawkeye wants to call it quits after Endgame. Along with rumors of this untitled Hawkeye series, Entertainment Weekly also reported that a series pairing Bucky Barnes (Sebastian Stan) and the Falcon (Anthony Mackie) is in the works at Disney+. Back in January, The Hollywood Reported reported that there's a Scarlet Witch series in development starring Elizabeth Olsen that will feature Tom Hiddleston’s Loki and Paul Bettany’s The Vision. Not to mention, be written by Jac Schaeffer, one of the writers behind Captain Marvel.

Again, none of these are official yet, but officially, Black Widow is getting her own movie. It will reportedly feature Stranger Things' David Harbour in a mysterious role, though, Scarlett Johansson can't tell you anything about that. “When, what?” she answered when Jimmy Kimmel asked her when the film starts shooting. “Where, when? That’s a lot of words. I don’t know. Too many words.”

Another thing these Avengers might not want to talk about right now is what happens at the end of Endgame. Luckily, fans won't have to wait too much longer for that. The latest installment of the Avengers hits theaters April 26.

More like this
'Bridgerton' S3 Teases Exciting Social Season For Penelope Featherington
By Bustle
What Jen Shah's Delayed Sentencing Could Mean For The 'RHOSLC' Season 3 Reunion
By Brad Witter and Jake Viswanath
You Definitely Know The Voice Of Shuri's AI In 'Black Panther: Wakanda Forever'
By Brad Witter
This James Bond Event At Abbey Road Studios Was A 007 Fan's Dream
By Samantha Rollins
Get Even More From Bustle — Sign Up For The Newsletter