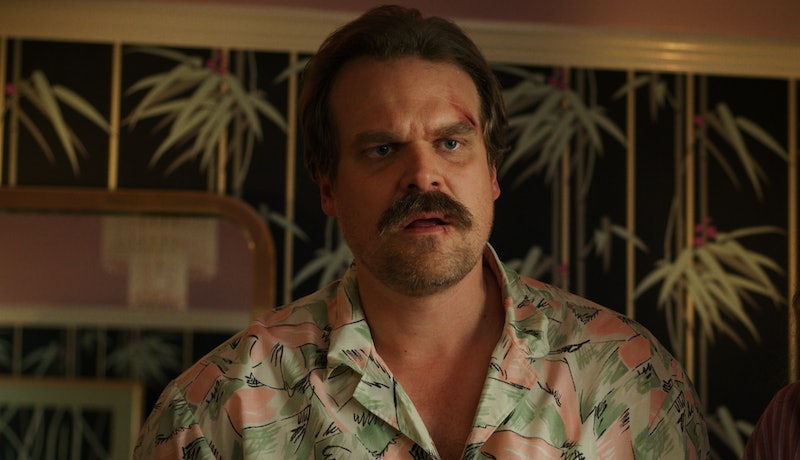 Move over Eleven, Sheriff Jim Hopper has a new assassin in his life. Stranger Things's David Harbour is joining Marvel's Black Widow starring Scarlett Johansson, according to The Hollywood Reporter. And let's hope this means Harbour will be bringing some of his charm and hopefully more than a few of his Christmas sweaters to this MCU standalone film focused on Natasha Romanoff.

On April 3, THR reported that Harbour had officially been cast in the upcoming Black Widow, which starts shooting in June. But will he be a friend or a foe for the Russian spy-turned-Avenger? As of now, it's unclear who Harbour will play in the movie, but honestly, since he's already gaining hero status playing Hellboy, let's hope it's the latter.

Already, fans are trying to guess who his mysterious Black Widow character might be. Birth. Death. Movies guessed that Harbour could play Black Widow's dad since THR's description of the movie appears to confirm it will be a prequel. Black Widow will reportedly be "an internationally-set story centering on Natasha Romanoff, a spy and assassin who grew up being trained by the KGB before breaking from their grasp and becoming an agent of SHIELD and Avenger."

Harbour isn't the only one joining Johansson in this long awaited superhero flick. Last month, Variety reported that Florence Pugh joined Black Widow to play the secondary lead in the film. Like Harbour, though, it's unclear who Pugh, who starred in Fighting With My Family and will appear in the horror movie Midsommer this summer, is actually playing.

Following the Harbour casting news, Variety also reported that The Favourite's Rachel Weisz might be joining Black Widow, too. According to Variety, she's in talks to join the film, so let's cross our fingers that this actually happens. In the meantime, fans are getting excited about the prospect of Weisz joining this already impressive cast.

"david harbour and rachel weisz in the same movie is basically the spectrum of my sexuality, so thank you disney," Nerdist writer Lindsey Romain tweeted.

While The Mary Sue's Rachel Leishman tweeted, "If Rachel Weisz and David Harbour are in the Black Widow movie with Sebastian Stan, I will truly combust."

Oh, yes amidst all the rumors connected to this movie, there's also one that Sebastian Stan, AKA Bucky Barnes will also be featured in this film, according to ScreenRant.

With all this speculative Black Widow news is worth looking at what we actually know about the film. It will be directed by Cate Shortland, the Australian filmmaker behind 2012's Lore. And it will be based on a script from Jac Schaeffer, who co-wrote Captain Marvel and is set to write the Disney+ series The Vision and Scarlet Witch.

Clearly, this is going to be Johansson's movie, but fans are happy to see she's getting a little help from Harbour and anyone else who signs on for Black Widow.

More like this
Margot Robbie Breaks Her Silence On *That* Viral 'Barbie' Moment
By Maxine Harrison
‘RHOSLC’ Star Jen Shah’s Arrest & Legal Drama, Explained
By Brad Witter and Jake Viswanath
A New 'And Just Like That' Table Read Pic Confirms A Key Character's Return
By Jack Irvin and Grace Wehniainen
The New Bachelor Will Be Announced Next Week & Here Are The Top Contenders
By Grace Wehniainen
Get Even More From Bustle — Sign Up For The Newsletter