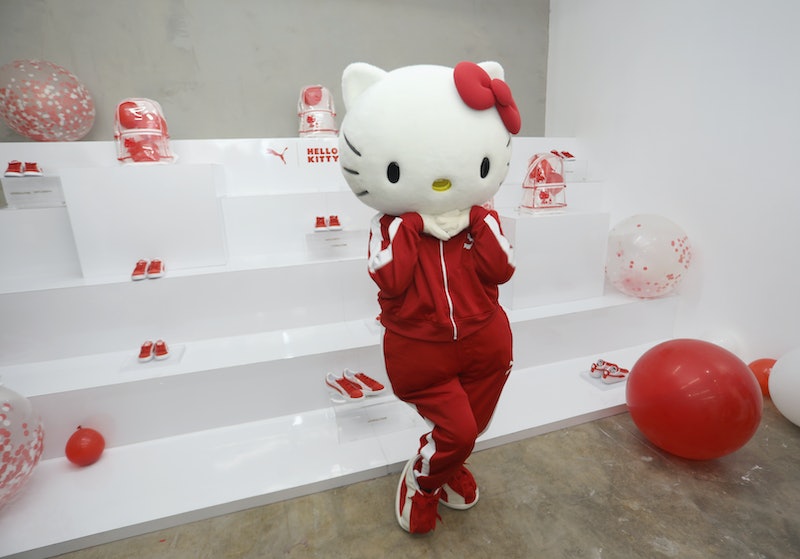 One of the most enduring pop cultural symbols of all time is finally getting her own movie. A face that adorns backpacks, keychains, phone cases, and just about any other artifact you can think of (yes, even wine) will soon be on the big screen. That's right, there is officially going to be a Hello Kitty movie and it feels long overdue. Not only is the future film major in that it will be Hello Kitty's first English-language movie, but it's also the first movie deal outside of Japan in the history of the brand, per Deadline. Warner Bros.' New Line Cinema along with FlynnPictureCo. gained the rights from Tokyo's Sanrio Corporation after what the New York Times reports was a five-year courtship.

It remains to be seen whether the feature film version of Hello Kitty will be animated or live-action (the upcoming live-action Lion King makes anything feel possible). Over the course of Hello Kitty's 45-year history, there have been several Japanese animated adventures with the lively cat as well as appearances on TV series. But a movie starring Hello Kitty opens up endless possibilities for the fan favorite. What will her personality be like (other than reliably adorable)? Presumably, the character will have a mouth unlike most toy versions of her. But what will she have to say? Considering it took this long to grant film rights for the character, it can be assumed that there will be close collaboration when deciding these details.

Sanrio founder President Shintaro Tsuji had this to say about the new deal in a statement to Deadline: "I am extremely pleased that Hello Kitty and other popular Sanrio characters will be making their Hollywood debut. Hello Kitty has long been a symbol of friendship and we hope this film will only serve to grow that circle of friendship around the world." According to the publication, other friends whose film rights have been acquired in the deal include My Melody, Little Twin Stars, and Gudetama. Several more characters are also available, making the possibility of a franchise more than plausible.

It seems that Sanrio has been inching more and more into the mainstream content market, partnering last year with Netflix to release Aggretsuko, an animated series following Retsuko the Red Panda. And IP-focused movies, particularly in the animated space, have never been hotter, evidenced by the latest Lego Movie franchise. The sky seems to be the limit for toy-driven narratives from legos to emojis to troll dolls. (Toy Story movies really opened the floodgates, didn't they?)

No toy feels more overdue for a film adaptation than Hello Kitty though, who with more than 50,000 branded products surrounding the feline released each year according to Deadline, could usher in a whole new generation of followers at the movies. Her popularity spans the globe making international box office numbers promising and even more merchandising opportunities available.

Hello Kitty has many passionate fans around the world and here's hoping this new film can be done in a way that preserves the character's whiskered spirit.