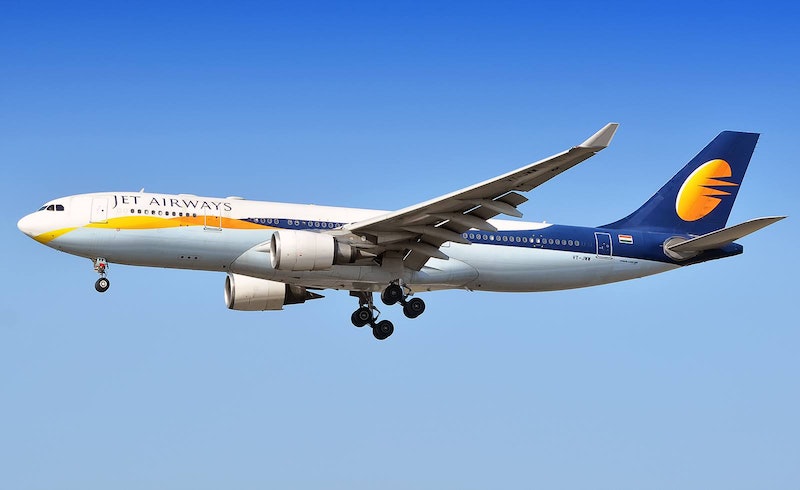 A Jet Airways flight from Mumbai to Jaipur in India was forced to turn around and make an emergency landing on Thursday after the plane failed to maintain cabin pressure, resulting in minor injuries for several passengers, such as headaches, nosebleeds, and ear barotrauma. Passengers were safely deplaned after the emergency landing and treated for injuries, said Jet Airways in a statement released on social media following the incident. The airline also said that the cockpit crew for the flight had been removed from scheduled duties while an investigation is carried out; in a further statement, Jet Airways said, “We are also extending full cooperation to the DGCA for the ongoing investigation of the event. Jet Airways regrets the inconvenience caused to its guests.”

Jet Airways flight 9W 697 was scheduled to depart from Mumbai, heading to Jaipur, on Thursday morning; however, the cabin was not able to maintain pressurization after takeoff, according to CNN. The plane subsequently deployed oxygen masks, then turned around to make an emergency landing at Mumbai. Said the airline in a statement released on Twitter, “The B737 aircraft, with 166 guests and five crew, landed normally in Mumbai.”

The Guardian reports that the incident took place over approximately 45 minutes, with around 30 allegedly complaining of headaches or nosebleeds. Five of these passengers were admitted to Dr. Balabhai Nanavati Hospital in Mumbai, reports the Indian Express, while the remainder were treated at the airport in Mumbai. “All guests were deplaned safely and taken to the terminal,” said the airline in their statement. “First aid was administered to the few guests who complained of ear pain, bleeding nose, etc.”

Dr. Rajendra Patankar of Dr. Balabhai Nanavati Hospital confirmed to the Indian Express that the hospital had treated passengers after the event. “We received five patients from the airport between 11-12 p.m. today post the incident of loss in cabin pressure,” said Dr. Patanka. “The patients are being evaluated by our ENT consultant. They have suffered ‘barotrauma’ of [the] ear due to change in air pressure.”

In an additional statement released on social media several hours later, the airline said, “Five guests who were referred to a hospital for additional medical check-up accompanied by the Jet Airways Care team have since been released, post-medical examination. We will continue to offer necessary medical care and attention to the concerned guests as required.”

Symptoms of ear barotrauma include dizziness, difficulty hearing, ear pain, nosebleeds, and ear drum injury, according to Healthline; however, once the condition is treated, most symptoms will disappear. “Hearing loss from ear barotrauma is almost always temporary and reversible,” states Healthline.

Several passengers recorded videos or took photographs of the interior of the plane during the incident, which they then posted to social media. Wrote Darshak Hathi, director of the Art of Living Foundation in Bangalore, “Panic situation due to technical fault in @jetairways 9W 0697 going from Mumbai to Jaipur. Flt return back to Mumbai after 45 mts. All passengers are safe including me.”

It was not immediately clear what caused the depressurization. In a statement to the Indian Express, an official from the Directorate General of Civil Aviation (DGCA), the regulatory body for civil aviation in the Indian government, alleged, “During the climb, the crew forgot to select a switch due to which cabin pressurization could not be maintained. … As a result, oxygen masks got deployed.” According to CNN, a spokesperson for the airline would not confirm this allegation.

Jet Airways did note in a statement, however, that the flight’s cockpit crew had been “taken off scheduled duties pending investigation”; in a further statement, the airline noted that they are “extending full cooperation to the DGCA for the ongoing investigation of the event.”

The airline also apologized to the passengers of flight 9W 697, stating, “We regret the inconvenience caused to our guests.”