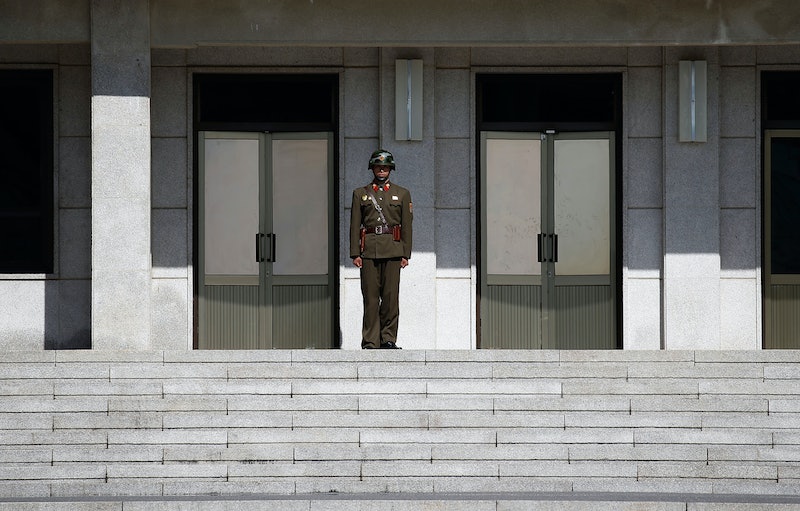 From the moment he was sentenced, it was plain for all to see that the crime Otto Warmbier supposedly committed was entirely out-of-step with the punishment. He got 15 years in a labor camp after being convicted of stealing a North Korean propaganda poster while on a five-day tour of the country. But it's an open question whether Otto Warmbier did what North Korea accused him of doing. One woman who was with him on the trip, Danish journalist Ria Westergaard Pedersen, doesn't seem to believe it.

Warmbier, a student at the University of Virginia, was convicted and imprisoned in North Korea for 17 months for trying to steal a propaganda poster from a hotel in the North Korean capital of Pyongyang, something he admitted to in a statement prior to his imprisonment. Given the intense brutality of the North Korean state, however ― it is considered one of the most repressive authoritarian nations on Earth, rife with intimidation, torture, and a network of officially secret concentration camps ― many say the confession was coerced.

In a recent interview with BBC News, Pedersen said Warmbier, who was imprisoned for 17 months before being released back to the United States, where he died six days later, had been extremely cautious about even taking a photo that might have violated rules against it, so she has a hard time believing he would've so brazenly risked his freedom, as the government claimed.

We wanted a really good photo of the military personnel in their uniforms, because it was so extraordinary. But we were told before that you were not allowed to take pictures of military places, installations or staff. So we were pretty nervous... we did not dare take such a photograph. We talked a bit, said we really wanted that photo, and thought what if one of us stood in the foreground and then they are like in the background? Then we would not have broken the rule completely, and then we must be on safe ground.

To hear Pedersen tell it, the pair did ultimately snap the edgy photograph, which she described as "on the edge of what we were allowed." Which is part of why she doesn't believe Warmbier did what the North Korean government claimed. She said it didn't make sense to her that he'd show so much awareness and concern about violating the photography rule, but would act so brazenly and dangerously in trying to nab a poster.

For me it doesn't make sense, that the same guy who was so nervous about taking this one picture which was maybe on the edge of what we were allowed, to an almost totally different being, running off trying to steal a banner. It does not make sense to me. Personally, I do not think he did anything wrong.

Some elected officials have offered responses to Warmbier's death, varying from condemnations of the North Korean government to the suggestion that Americans shouldn't be visiting the country at all and should have to sign waivers before doing so ― Arizona Sen. John McCain, in fact, argued both of those points on Tuesday.

President Donald Trump called Warmbier's imprisonment and death a "total disgrace," but then pivoted to attacking his predecessor, former President Obama, for not having secured his release sooner. A spokesperson for Obama rebuked Trump's remarks, saying the previous administration showed "tireless effort" trying to bring the college student home, and cited 10 other American captives who were released throughout Obama's tenure.

Warmbier's death has left a tremendous amount of uncertainty about how the United States will respond, if at all. The exact cause of his death is also not known ― his family has so far refused an autopsy ― though he reportedly suffered significant brain tissue loss while comatose.