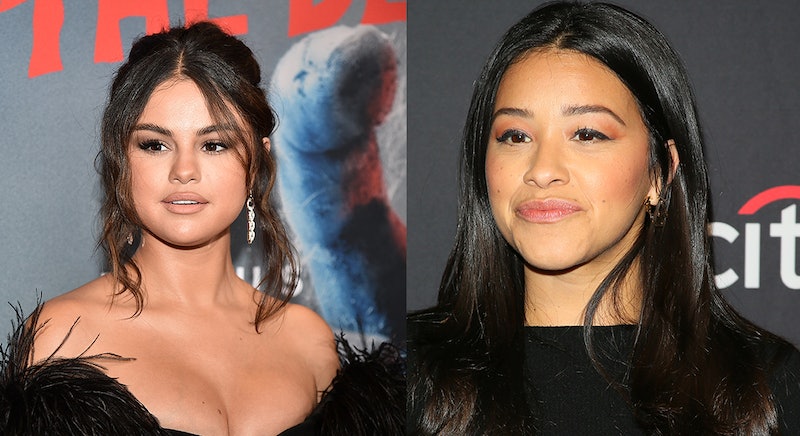 This familia latina is standing strong. Selena Gomez and Gina Rodriguez joined more than 200 artists and leaders to pen a letter to the Latinx community following the El Paso shooting and ICE raids. Their powerful message of "support, love and solidarity," which The New York Times, El Nuevo Herald, La Opinion, and El Diario published on Aug. 16, highlighted the importance of unity in dark times.

"If you are feeling terrified, heartbroken, and defeated by the barrage of attacks on our community, you are not alone," began the "Querida Familia" (English translation: "Dear Family") letter.

The actors, musicians, artists, activists, and labor and civil rights leaders behind the note also explained how the Latinx community has been "smeared by political rhetoric and murdered in violent hate crimes ... separated from our families and watched our children caged" and "targeted with mass shootings and mass ICE raids meant to terrify us, squash our hope, and break our spirits."

The attacks referenced in the open letter, of course, include the Aug. 3 El Paso, Texas, mass shooting that resulted in 22 deaths and more than 24 injuries, per CNN. According to police, shortly before the domestic terror attack, the shooter is believed to have allegedly published a hate-filled online "manifesto" aimed at immigrants and the Latinx community.

Then, on Aug. 7, federal agents detained approximately 680 individuals allegedly working in the United States without authorization, in sweeping, targeted raids at seven agricultural processing plants across Mississippi, according to an ICE statement. Some "children in the area whose parents were detained that still do not have a parent with them" and are being temporarily looked after by relatives, neighbors, or family friends, Mississippi Department of Child Protection Services spokeswoman Lea Anne Brandon said on Aug. 15 (via CNN).

Additionally, Customs and Border Protection had released video of immigrant kids in a Texas detention facility in mid-June. The footage appeared to show children — many separated from their parents — being held in what looked like cages. Per a subsequent Associated Press report, lawyers who visited a Texas border facility claimed that migrant children are being detained in "inhumane" conditions.

In the face of what the "Querida Familia" letter called "indignities and cruelty," the Latinx community remains united. As the letter explained:

We will not be broken. We will not be silenced. We will continue to denounce any hateful and inhumane treatment of our community. We will demand dignity and justice. Though real pain and fear are sweeping through our communities, we remain powerful. The indignities and cruelty we have endured will never change the truth that the contributions we make to this country are invaluable. Our humanity must be respected. And, we won’t stop organizing for ourselves, our children, and for the soul of this nation.

“As a Latina, my heart breaks with every attack on our dignity, humanity and lives. And as an American, I fear for the future of my country when our culture and policies lack a basic decency and respect for human life,” Ferrera said in a statement provided to Bustle. “We all have a responsibility to show up in this moment and demand decency for one another and for our country.”

Added Longoria in a separate statement: “We’re facing a moral crisis in our country, and we chose to use this moment to raise our voices, and speak up. Integrity starts with looking in the mirror and this letter calls on everyone, not just our community, to choose humanity and decency over hate and violence.”

Indeed, those who signed the letter highlighted the necessity for allies who "feel our community's pain" to "speak out loudly against hate," contribute resources to organizations that support the Latinx community, and hold leaders accountable. "May we turn this time of despair into a time of action," concluded the message. "May our love for one another be the guiding light in these dark times."

Ramirez added in a statement: “During these difficult days love feels like a political act. This letter is a political statement: Our community is united and we are powerful and mobilizing to hold our leaders accountable especially going into 2020.”

With more than 200 Latinx leaders lending their voices to support their community in the Querida Familia letter — and countless others doing so elsewhere — hopefully, those affected by recent events will not feel alone.

More like this
8 Charities To Donate To During Black History Month
By Alexis Morillo
Selena Gomez Confirms She's Single Amid Drew Taggart Dating Rumors
By Martha Sorren, Jake Viswanath and Jack Irvin
"Lavender Haze" Star Laith Ashley Breaks Down Filming With Taylor Swift
By Jake Viswanath
18 Photos Of Jennifer Lopez’s Mansion You Can Now Buy For $42.5 Million
By Alyssa Lapid
Get Even More From Bustle — Sign Up For The Newsletter
From hair trends to relationship advice, our daily newsletter has everything you need to sound like a person who’s on TikTok, even if you aren’t.