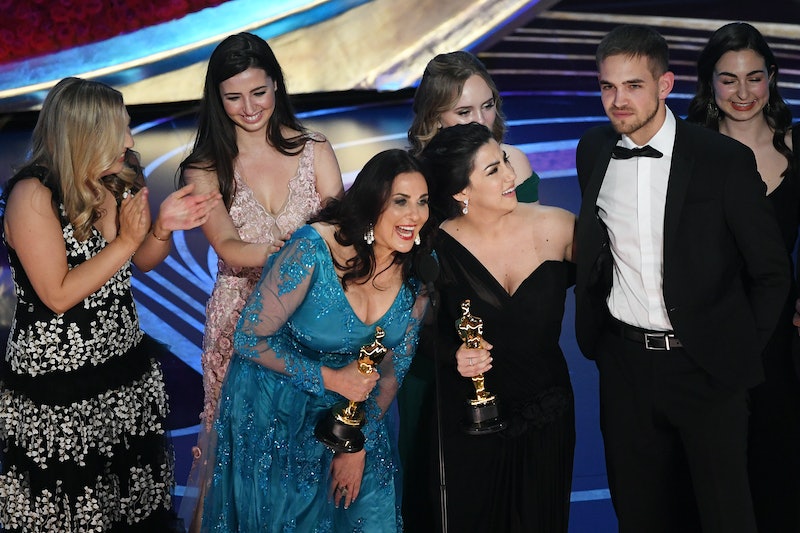 Best Documentary Short isn't the flashiest Academy Awards category, but the winners turned heads in a major way. Period. End Of Sentence. won an Oscar — yes, a short about periods! And the creators' acceptance speech was an easy favorite.

"A period should end a sentence, not a girl's education," declared producer Melissa Berton in the speech. The film, which is available to watch on Netflix, is about ending stigmas surrounding menstruation all over the world. However, even at an event as glitzy and politically liberal as the Academy Awards, it's still somewhat shocking to hear people talk about periods on live television — so the win is helping break down stigmas, too.

Here is the official description of the film from Netflix:

"In rural India, where the stigma of menstruation persists, women make low-cost sanitary pads on a new machine and stride toward financial independence."

Not only do these pads help the women involved in this business seek independence financially, the pads themselves help women and girls live their lives on their periods. Director Rayka Zehtabchi started things off with a laugh. "I'm not crying because I'm on my period or anything," she said. "Know that you are empowering women all over the world to fight for menstrual equality."

Watch the tearful, joyful speech below:

Want to talk about stigmas? Please, let's, because an anonymous Oscar voter in their "Brutally Honest Oscar Ballot" for The Hollywood Reporter wrote that Period. End Of Sentence. is "well done, but it's about women getting their period, and I don't think any man is voting for this film because it's just icky for men."

Whether that was a man speaking his embarrassing truth, or a woman being cynical, they were proved wrong tonight.

"We learned that [menstruation is] very complex, and it’s a multi-layered issue," Zehtabchi said in an interview with Refinery29, "something that has been deeply rooted, a stigma deeply rooted, in Indian culture and society forever [...] When so few people talk about it, and there's very little information around what this natural phenomenon really is, it starts to build fear around it."

The organization that the film is about was started by a group of feminist and social-activism minded students from Oakwood School in North Hollywood and a group called Girls Learn International.

In rural India, Zehtabchi said, "there's all these kind of myths around what menstruation is." She continued in the same interview, "The common misconception, especially from the men, is that it’s an illness or it’s impure. In Hindu religion women are not actually allowed in the temple when they menstruate, because they're believed to be dirty."

Period. End Of Sentence. has a powerful message for women internationally, in third world countries, and in rural or developing areas. It's also just pretty cool that an "icky for men" movie has an Oscar. If it's that hard to believe that a short documentary about periods won a major award, it's clear that taboos and stigmas surrounding menstruation are still prevalent in the world, no matter what form they take.