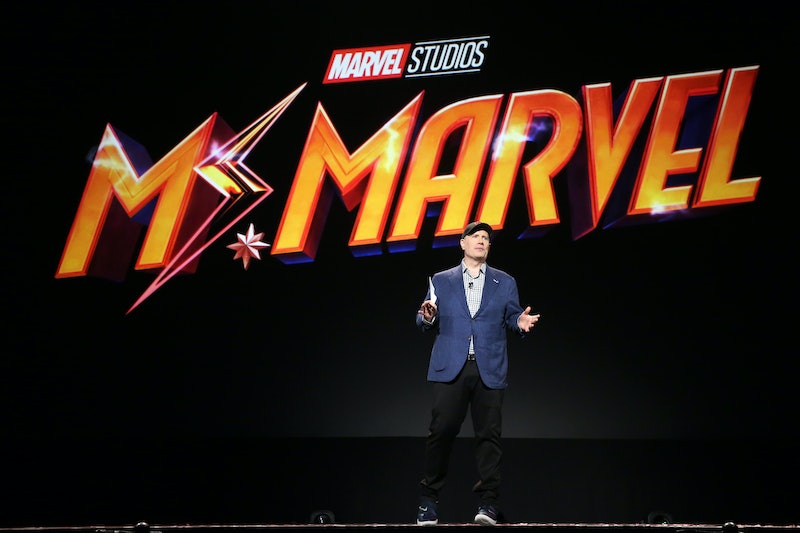 Get ready for Marvel to embiggen its superhero universe. A Ms. Marvel series is coming to Disney+, the studio revealed during the Aug. 23 Disney+ First Look Showcase at D23. Not only will Ms. Marvel headline her own TV show, but, according to Marvel Studios president Kevin Feige, she'll begin appearing in the MCU in big screen movies as well, per MTV News' Alissa Schulman. Although Disney+ launches on November 12, there is not yet an official release date for the series.

The major announcement, of course, also marks a huge win for diverse representation, given that Ms. Marvel (aka Kamala Khan) — a Pakistani American teen from New Jersey — is Marvel’s first lead Muslim character. This isn't even the first time Ms. Marvel, who debuted in the comics in 1976, made history either. In 2014, Khan's incarnation also became the first Muslim character to lead her own series, after she took over for Carol Danvers when she officially became Captain Marvel.

According to The Hollywood Reporter, British scribe Bisha K. Ali will write the upcoming Disney+ series and also act as showrunner. Ali, who's also a comedian, is currently a staff writer on Hulu’s Four Weddings and a Funeral limited series, which was co-created by Mindy Kaling.

It comes as no surprise, then, that Kaling may be involved in the Ms. Marvel Distney+ series in some capacity. After all, she's been pulling for its creation for some time now. Last year, fellow actor Riz Ahmed tweeted, "So when do @MarvelStudios want me @mindykaling @kumailn to get started on the Ms Marvel screenplay?" (Note: @kumalin is Kumail Nanjiani's Twitter handle.) Kaling's response? "Riz! I am obsessed with this comic book, I’ve read them all. I love Kamala Khan."

Kaling continued the love fest earlier this year while promoting Late Night with Emma Thompson an interview with MTV News. "The people I've spoken to at Marvel about it are so excited about the character," she said in June. “I told them I would help in any way, because I truly love her. ... I think they understand how much there is the excitement. You know, Riz, me, every different Desi actor was very excited."

As far as who will play Ms. Marvel, Kaling added the she feels "it might need to be an unknown." She gushed, "Wouldn't that be exciting?"

Naturally, the actor isn't the only MCU stan already thinking about casting. "Honestly, I just want @disneyplus to make the right decision," wrote Twitter user @Zoha__R "This is such a HUGE opportunity for them to find someone truly representative. Ms Marvel means so much to our community and our people, please don’t mess this up. @Marvel you got this!"

Many other fans echoed those sentiments. As another fan named Simu Liu tweeted: "What a world we live in today where we are seeing representation in ways we would never have imagined growing up. I can't wait to get to know you, Ms. Marvel. Let's make the world better."

As everyone awaits further details on the upcoming series, there is plenty of time for excitement to build — and for Marvel to put the spotlight on female empowerment, as well as America's diverse culture.

More like this
'GoT' Star Emilia Clarke Says She "Just Can't" Watch 'House Of The Dragon'
By Brad Witter
This Dark 'Happy Valley' Theory Is Staring You Right In The Face
By Sophie McEvoy
This Dark 'Happy Valley' Theory Will Keep You Up At Night
By Sophie McEvoy
'The Last Of Us' Has Officially Been Renewed For Season 2
By Darshita Goyal
Get Even More From Bustle — Sign Up For The Newsletter
From hair trends to relationship advice, our daily newsletter has everything you need to sound like a person who’s on TikTok, even if you aren’t.