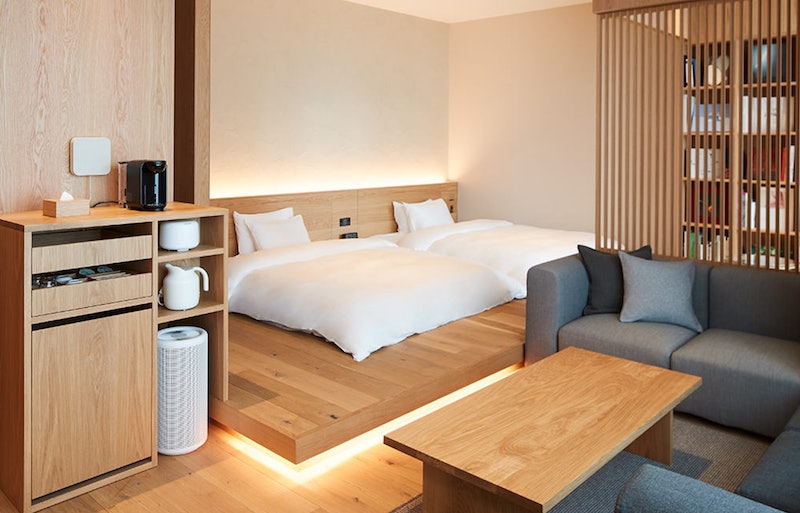 If you can’t get enough of living that MUJI life, I have excellent news for you: Iconic Japanese store and "no-brand" brand MUJI just opened a hotel in Tokyo — and it’s as beautiful as you’d expect it to be. Opening its doors on April 4, 2019, MUJI Hotel Ginza now lets travelers surround themselves with the MUJI aesthetic, from the brand’s furniture to its tableware while they sleep; additionally, restaurants, lounge spaces, a MUJI flagship store, and a whole bunch of other bells and whistles give you even more ways to unwind — or go on an adventure, if that’s how you roll. The hotel is accepting reservations now, so if you’ve been thinking about taking a trip to Japan in the near future, now might be the time to lean into that plan hard.

Found in 1979 and unveiled to the public in 1980, MUJI has become well known over the ensuing decades for its minimalist aesthetic, solidly-made products, and reasonable prices. You can get anything from clothing to furniture and from beauty products to pens and pencils at MUJI — and no matter what you gravitate towards, you can pretty much guarantee that it’s going to be as beautiful as it is functional. There are no brand names cluttering up the designs; there are no extraneous bits or superfluous details hanging off of the items; and everything you'll find there does exactly what it's supposed to do — no more, no less.

In recent years, however, MUJI has expanded their brand from simply shopping to — somewhat unexpectedly — hotels and hospitality. The first MUJI Hotel opened up in Shenzhen, China in 2018, with a second following in Beijing shortly thereafter. Billed as “neither exorbitantly priced [with superfluous] services,” nor suffering from “dreary guest rooms resulting from the extreme reduction of quality,” the hotels aim to bring the same simple, yet well-executed qualities to travel accommodations that the brand brings to the household products, stationary, and other items made and sold in its stores.

The MUJI Hotel Ginza represents the first branch of the brand’s hotel concept to open in Japan. With a design scheme focused on connecting with the earth, the hotel is full of wood and stone, including a number of repurposed materials — for example, stones that once paved the way for a trolley system that ran through Tokyo a century ago and upcycled debris from old ships both feature in the design.

It is, in a word, gorgeous.

A Type A room at the MUJI Hotel Ginza.

The new Ginza hotel has 79 rooms ranging in size from quite large to compact: The largest floorplan available, the Type I room, measures 52 square meters (around 560 square feet), while the smallest, the Type A room, measures just 14 or 15 square meters (around 150 square feet). With the exception of the Type A room, though, all nine of the room types can house one to two people. (Type A rooms are meant for only one.) The kind of bed varies by room type, as well; some of them have single beds, while others have double beds, and still others come equipped with bunk beds.

A Type I room at the MUJI Hotel Ginza.

Despite the differences between the types of rooms, though, the hotel notes that “great care has been taken to ensure that the room will restore travelers in body and spirit alike.” The mattresses on the beds were chosen based on sleep and posture research; the towels are described as “gentle to the touch”; and the lighting is “designed to guide guests into natural slumber.” All in all, the rooms are meant to create calming, comfortable atmospheres that will help you unwind after a long day of work or play.

But the hotel offers more than just rooms. Two restaurants — a more traditional one and a diner — a bakery, a salon (the kind where you enjoy coffee and chat with people, not the type where you get your hair done), a library, several gallery spaces, and, of course, a MUJI store are all housed within the hotel’s walls; what’s more, you’ve got all of Ginza literally right outside the door.

Speaking of Ginza, the choice in location for this particular hotel is interesting to me. Ginza is what I’ve always thought of as one of Tokyo’s Fancy-with-a-capital-F neighborhoods; it's known largely for its luxury shopping and designer houses. (The Kabukiza Theatre, where kabuki theatre is performed in Tokyo, is also located in Ginza, so additionally, there's lot of traditional cultural in the area.) Meanwhile, a big part of MUJI’s brand identity has always been its affordability: The majority of its dishware comes in at under $15 per piece; there are tons of storage solutions in the under-$20 price range; skincare items are typically under $15, and more often in the $5-to-$10 range; the clothing is incredibly reasonable; and the stationary! Oh, the stationary! If you’re a stationary person, MUJI is the place to go.

All of which is to say that MUJI generally isn’t exorbitantly expensive. Even the pricier items, like furniture, are still a lot more affordable than the designer versions of those items would be — so in that sense, it’s somewhat unexpected that MUJI’s first Tokyo hotel would open up in Ginza. At the same time, though, MUJI is also known for its minimalist elegance — so, given that Ginza has a similar reputation for elegance, the choice of location also makes a lot of sense. (And those $500-per-night rooms certainly occupy the higher end of the price range when it comes to hotels in general.)

A MUJI store also opened alongside the hotel, so the brand has the whole shopping thing for which Ginza is famous covered, too. In fact, the store, which functions a flagship location for the brand, occupies the first five floors of the building, with the hotel’s actual rooms covering the next five floors up. Talk about a MUJI enthusiast’s fondest dream.