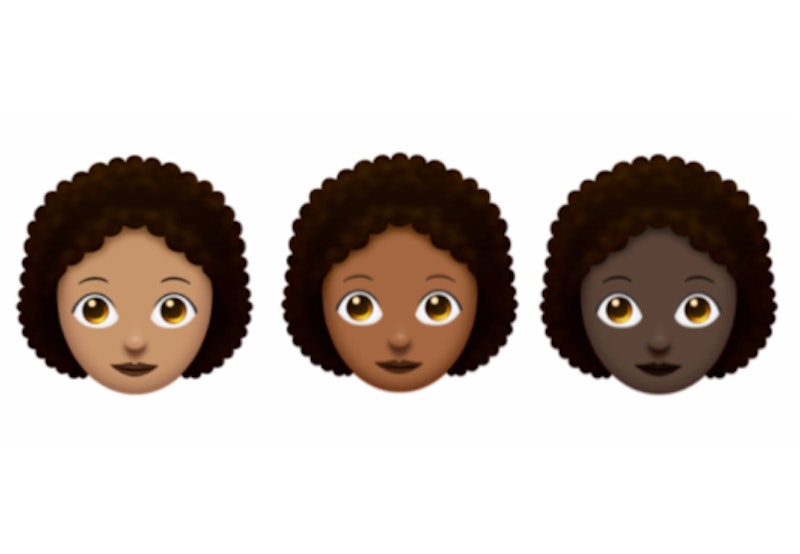 A moment of silence is in order. Curly haired beauties are having a moment because a natural hair emoji may be coming soon to a mobile device near you. And honestly, it's about damn time.

When word got out that a redhead emoji might be on the way, the internet nearly lost its minds. Now, curly Q's are getting their chance to shine with a more representative emoji possibly making a debut in 2018. Unicode Consortium, a non-profit corporation responsible for choosing emojis for all platforms, released a proposal for potential new emojis. Among the redheads, silver foxes, and characters with shaved heads, were a few curlfriends. Made in every skin tone currently available, the new set of emojis were the lifesavers curly girls needed as of yesterday.

As stated by the proposal, the newbies with spiraled locks are meant to represent curly or afro-textured hair. So, that means natural haired women of color finally have an emoji with kinky-curly locks, even if the character's hairstyle isn't exactly a true representation of a good curl day — girlfriend has some kind of awkward mullet going on that's pretty far off base.

But this naturalista of an icon is at the very least, a step in the right direction of representing all emoji users.

There's even a male emoji rocking a glorious fro, so Unicode really has every kind of curl lover covered. Let's not get ahead ourselves though, because there's still some time to wait before curly haired emojis are a reality. The new set won't be finalized until January.

But the thought of an animated naturalista invading text messages, Snapchats, and Instagram posts is just too exciting not to celebrate now. The whole ordeal would be an absolute dream come true, if it weren't for the misshapen fro atop the emoji's head.

Unicode cited Natural hair vlogger Ciara Anderson as the source of inspiration for the emoji, with a specific photo of her wash and go curls linked. Obviously, Anderson's emoji counterpart fails in comparison to her oh so poppin' curls, featuring the bang of coils and rounded shape that naturalistas work so hard to achieve.

There's just no making up for the emoji's awkward curl shape, no matter how groundbreaking this possible introduction into the emoji family is. So naturally, the Twitterverse had to give its sassy two cents.

Many naturalistas were just not. having. it.

With her shape all out of whack, the emoji just really doesn't cut it.

The hairstyle was even borderline offensive to many curly Q's.

Perhaps Unicode should go back to the drawing board (and quick!) with this one before Twitter really gets out of hand.

Regardless of its unappealing hairstyle, the thought of not having to settle for an emoji with straight hair was a relief for many women of color proudly rocking curls.

In favor of the possible update, some Twitter users were just itching to get access to the new emojis.

Deformed curls or not, the emoji does the curly haired community some justice — and that's what really matters at the end of the day.

It's been a long time coming for curly girls who couldn't wait to see this kind of emoji make an appearance. Finally, girls of all hair types will have the chance to express themselves with an icon that properly represents their looks. Even if its hairstyle isn't exactly ideal, the fact that emojis have gotten much more inclusive is worth celebrating.

After all, updates are always happening. So, who's to say the emoji won't get a makeover that transforms her curls completely in the future.