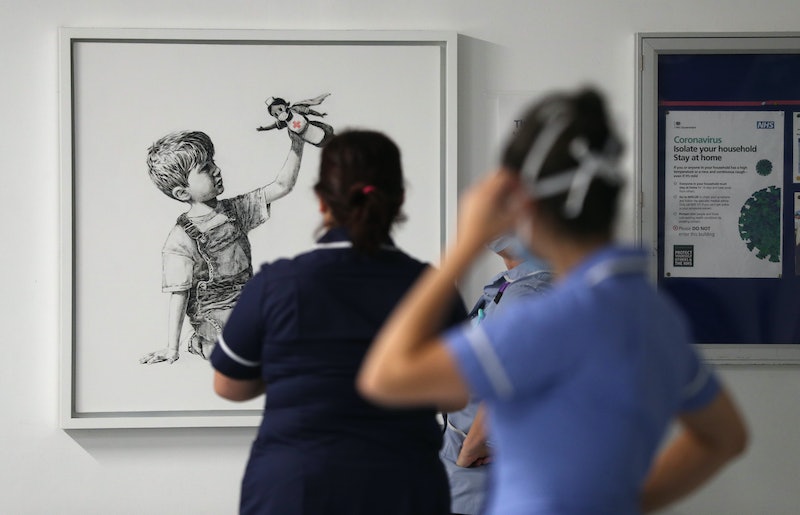 During the ongoing coronavirus pandemic, appreciation for NHS workers seems to be at an all time high — with various high-profile fundraisers and a weekly applause for those on the frontline. Now, one the biggest names from the world of art has shared his own appreciation, and a new Banksy artwork has appeared at Southampton General Hospital.

As the BBC reports, the large painting displays a young boy kneeling beside a basket of toys, filled with superhero action figures Spiderman and Batman. However, the boy has instead opted to play with his new favourite superhero: an NHS nurse.

The toy nurse's gesture mirrors the classic Superman pose, and along with a superhero-style cape, she's shown to be wearing a face mask.

The one square metre painting was unveiled with the help of the hospital's managers, and has been displayed in an entrance close to the emergency department.

"Thanks for all you're doing. I hope this brightens the place up a bit, even if its only black and white," said Banksy in a note left to hospital workers.

The artwork will be displayed in Southampton General Hospital until the autumn, and later be auctioned to raise money for NHS charities.

As the Metro reports, the chief executive of University Hospital Southampton NHS Foundation Trust, Paula Head, revealed how her "hospital family" has been deeply impacted by the "tragic loss of much loved and respected members of staff and friends."

"The fact that Banksy has chosen us to recognise the outstanding contribution everyone in and with the NHS is making, in unprecedented times, is a huge honour," she added.

Discussing the painting further, Head explained how she believes the artwork "will be really valued by everyone in the hospital," and continued: "as people get a moment in their busy lives to pause, reflect and appreciate this piece of art. It will no doubt also be a massive boost to morale for everyone who works and is cared for at our hospital."